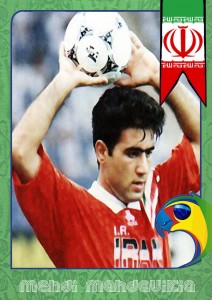 Mehdi Mahdavikia, known as ‘The Rocket, was born in Tehran on the 24th July 1977. At the age of 14, he joined Bank Melli FC [now dissolved] which was a sports subsidiary of Bank Melli Iran and which was renowned for the quality of its youth academy.

Mahdavikia stayed until 1995 when age 18, he signed for one of the biggest clubs in Asia – Persepolis FC. Playing as a striker in his early years, Mahdavikia made 11 appearances in his first season as The Red Army won the league title. The following season having cemented a regular starting place he scored nine goals in 28 appearances as Persepolis won back to back titles. The season also saw Mahdavikia help his team get to the semi-finals of the Asian Club Championship before losing to the Pohang Steelers; Persepolis reaching the same stage the following season.

Having represented Iran at U-20 and U-23 level by 1996 ‘The Rocket’ had already played for the senior national team the autumn of 1997 saw Mahdavikia step into the spotlight. In the final round of AFC qualifying for the 1998 World Cup Iran were trailing 2-1 to China when ‘The Rocket’ stepped up. A fine solo goal was followed by a thunderous goal which was known at the time as ‘a surface to surface’ missile, [he was then playing right back – filling in for the suspended Naeim Sadavi]. Iran would go on to qualify getting past Australia in the Intercontinental play off. The 1998 World Cup – sandwiched between losses to Yugoslavia and Germany was the match which grabbed world attention – Iran vs USA. In the 84th minute

Mahdavikia broke through on goal to effectively seal victory. He would represent Iran until 2009 making 111 appearances [20 as captain] and scoring 13 goals.

By now The Rocket had attracted interest from Germany and spent the next season on loan at VfL Bochum before signing for Hamburger SV in 1999. ‘The Rocket’ would spend eight years, primarily at right back but also occasionally as striker these years were generally a success. Fans player of the year in 2003 [in which he was the top assister of goals in the Bundesliga] and 2004 earning the name der Teppich [The Carpet] for the way he could glide past opponents.

The Rocket made a total of 208 appearances and scored 26 goals before in 2007 he moved to Eintracht Frankfurt. It was not a happy period – injuries and bench meant only 32 matches in three years. Mahdavikia returned to Iran and following brief spells at Steel Azin and SC Damash, he returned to Persepolis in 2012 for a final year, captaining the team.

Mahdavikia’s importance should not be underestimated. One of Iran’s greatest and most capped players through a combination of talent and hard work, he was also one of the first to gain international recognition and open the doors by moving to one of the traditionally strong western European leagues.