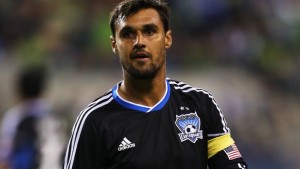 At the time of writing this article, Chris Wondolowski is part of the US Men’s National Team at the Gold Cup.  In the four games he has played in (one being a friendly) ‘Wondo’ has netted 6 goals. One against Guatemala, a hattrick against Belize all in the first half before rounding it off with two v Cuba after coming off the bench in the second half.

With the group stage done, USA are in the knock-out stages where the Californian native will be looking to add to his goal tally which has placed him joint top in the race for the golden boot. Wondolowski may or may not win the boot, but what is for sure is that even if he wasn’t to win he won’t look back. He’s already got two golden boots to his name at domestic level.

Chris Wondolowski is the epitome of a success story and a prime example of how far sheer perseverance, hard work and unfaltering self-belief can take you. In 2005, Wondolowski was a nobody. Having been drafted 41st overall in the 2005 MLS supplemental draft by San Jose Earthquakes, it was clear that Wondo was going to have to work his way up the ladder and prove to everyone he had what it took otherwise risk being waived. This meant playing in the reserves where, in that year, he led the team’s scoring with 8 goals in 12 appearances. After San Jose’s relocation to Houston in 2006, Wondolowski scored 13 in 11 for the reserves once more. Even then, a goalscorer was evolving out of the woodwork. 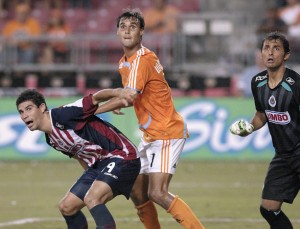 Wondo had pushed himself into the first team squad but was going to have to endure the three toughest years of his career. A paltry four goals in 37 MLS appearances over a three year span was not enough for him to  retain a spot for the Dynamo. Wondolowski knew he would have to improve dramatically to become sure starter. He was traded back to San Jose in June 2009, it was perhaps one of the best decisions he has ever made.

Since moving back  home, the awards he has picked up speak for themselves. MLS Golden Boot in 2010 and 2012 (losing 2011 in a tiebreaker), the MLS MVP in 2012, a fixture in the MLS Best XI for 3 years running (2010,2011,2012) and the San Jose Earthquakes all time leading goalscorer. In MLS in 2010, he scored 18, 2011 was 16 and 2012 a extraordinary 27 goals equalling Roy Lassiter’s single-season goals record of 27 set back in 1996, MLS’ inaugural year. Wondolowski is an undisputed goal machine. His ability to be at the right place at the right time is incredible whilst even being endorsed by John Terry, calling Wondo a ‘nightmare’ to defend against.

His strength, hold-up play and defensive contribution should not be forgotten about either. It is so rare to find a striker anywhere around the world who reaches double figures for three seasons running (and potentially four) and does not secure a move to a prestigious club in Europe. At the age of 30, Wondolowski is currently at the peak of his career with his market value being slightly lower than before (currently €1.5m). Why would a team not take a chance on such a consistent goalscorer who has proven himself time and time again? Age should not have to be a stigma when the most important number – goals – is all that truly matters when searching for a striker. 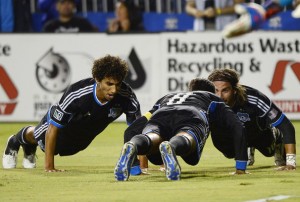 This season has been trickier for Wondo with a still respectable 5 goals in 17 appearances. However, other factors have come into play. The sacking of fan favourite head coach Frank Yallop mid-season, combined with the overall team’s domestic form and been asked, at times, to play a midfield role has seen a decline in his goal output. The burden of ever increasing responsibility for team captain Wondolowski will inevitably be weighing heavy on the US international’s shoulders but he is not one to shy away from such pressure.

His form at the Gold Cup will hopefully translate into domestic form for when he returns and help to lift the struggling eighth place ‘Quakes. Wondolowski’s key trait is always his ability to bounce back from adversity, he will hope to do so once more and if he does? Who’s to say he couldn’t secure not only his ticket for the 2014 World Cup but also a move to Europe that all of his hard work deserves.