For Barcelona, the 1974/75 season was one of unfulfilled promise. Beaten by Leeds in the European Cup semi-finals, they finished a distant third in the League behind Real Madrid and Zaragoza and – in the dying days of Franco’s regime – were losing quarter finalists in the penultimate Copa del Generalisimo.

But the game at Leeds, and some unintended consequences, brought Rinus Michels’ squad to Dennyfield, the isolated outpost of Bradford-based Yorkshire Leaguers, Thackley. 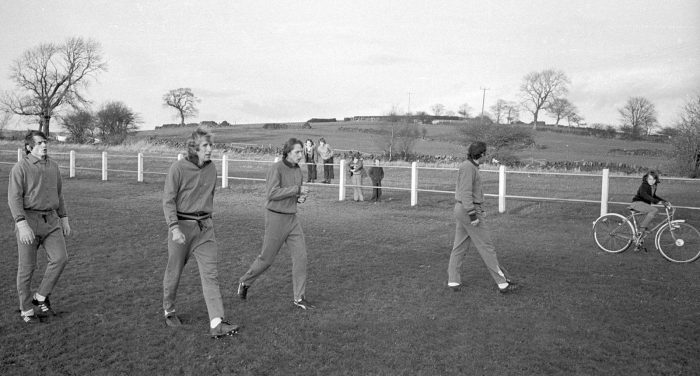 April 7th, 1975, had been a normal Monday for Thackley FC secretary Stuart Willingham – until the phone rang just after 5pm, as Willingham, now 79 recalls.

He said he was the UK representative of Barcelona FC, who would like to train at your ground tonight. I thought it was a joke and put the phone down. He called back and said Bradford City had given him my number, as they had a training session, and their ground wasn’t available.

I was due to meet the directors of my employers, the Johnson Corporation for a meal that night and was fortunate, with Barcelona’s Dutch connection that Johnson’s had a subsidiary in Amsterdam and that I could delay my arrival.

And Barca’s enquiry was well-timed. With Thackley hosting Ossett Albion the following day, Dennyfield would not have been available.

Situated on Bradford’s northern fringes, Dennyfield in the 70s was a tidy railed-off enclosure, open on one side with a wooden stand on the other. Thackley’s dressing rooms meanwhile, were post-war prefabs built by the players. “It was a decent standard for the time,” says Willingham, who has been at the club for 51 years, 37 of them as secretary.

The Barcelona players, including Johan Cruyff, Johan Neeskens and Spain international Carlos Rexach who were staying at the Baron of Beef hotel a mile away in Idle, were ferried by taxi to the ground, where the biting wind and exposed location gave the Barca squad a taste of the environment they would face at Elland Road two days later.

Photos at the time showed a clearly perished Cruyff, blowing on his hands for warmth, and Willlingham discussing matters with Rinus Michels, Barcelona’s former Ajax and Holland manager, outside the ground. The Barca coach was grateful for the hospitality; “Nothing was too much trouble for the Thackley people.”

“I had to get people together at short notice,” says Willingham, “which wasn’t easy, with no mobile phones.”  And with Thackley’s equipment locked up after a series of break-ins, the players made do with old, slightly mis-shaped footballs. 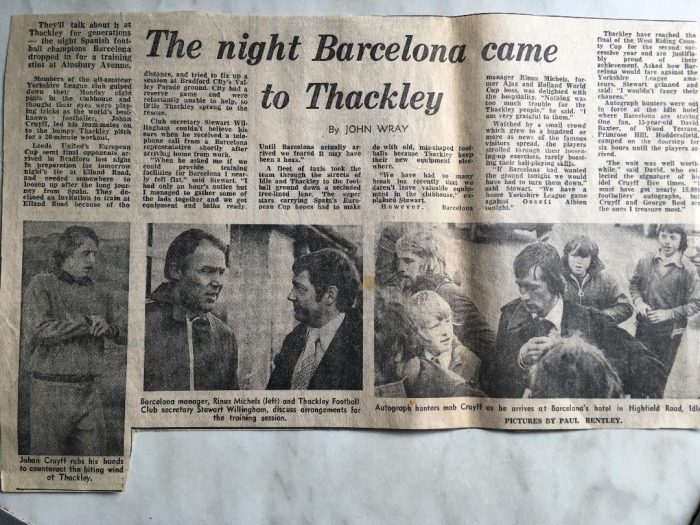 As word spread of Barcelona’s arrival, a crowd of about 100 onlookers and autograph hunters gathered. “After the session,” recalls Willingham, “the Barcelona squad came in the bar like any other players but were on soft drinks – Coke and so on. The players and manager, Rinus Michels were brilliant. It was a surreal experience.”

The Coke bottle used by Cruyff was kept behind the bar for years, “until the new cleaner threw it out”.

Forty-five years on, Barcelona find themselves ‘relegated’ to the Europa League, while Thackley, still playing at a modernised Dennyfield, have maintained their level rather better, in mid-table of the Northern Counties (East) League Premier Division.

A return visit for the Catalans, however, may depend on Leeds’ next European outing. In other words, don’t hold your breath.