“We were brilliant, absolutely brilliant,” said Neil Lennon after Sunday’s 1-0 win against St. Mirren in Paisley. Hardly. Lennon’s gushing surmising seemed somewhat exaggerated in the wake of a victory that came well into stoppage-time after Gary Hooper bagged his 10th goal of the season.

Anthony Stokes and Cha Du-Ri made nothing of two half chances that were the best on offer in the first half, and it was the home side that dominated over their illustrious visitors in the second. However, the result was a welcome respite from the grief Lennon must have been suffering after last Wednesday night’s away loss at Hearts. A vitriolic dispute with the main official as well as the sideline one led to the Celtic boss being sent to the stands, which was shortly before his side conceded their second on the night in a 2-0 loss.

Lennon now waits on an SFA decision on the punishment it is to hand out, and on Sunday he pointedly praised referee Iain Brines stating his handling of the St. Mirren game was “absolutely brilliant”.

The victory closed the gap at the top to a single point after Rangers had gone four clear on Saturday evening. Aberdeen were the perfect antidote for a Gers side who were on the wrong end of a surprise midweek scorline of 3-0 at Hibernian.

Aberdeen went to Glasgow for the second time in a week and left it on Saturday evening with 11 goals against, and zero for, against the Old Firm, in those seven days.

Mark McGhee’s valiant attempts at a positive front in midweek press conferences was very obviously lacking where it mattered — on the pitch. Although Rangers deserved little more than their 2-0 win at Ibrox, the abject nature of the Dons fight resembled Audley Harrison on the ropes later that night. Aberdeen were beaten before they ever crossed the white line. If the Dons continue to put in performances that this viewer witnessed they will be relegated, and no amount of fighting talk will be able to mask the fact that McGhee seems unable to rile his dressing room. 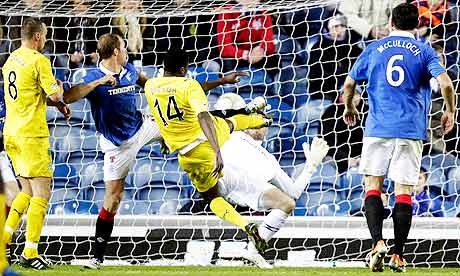 Although his exit would seem a likely option for the boardroom the crux of the matter lies in their finances, and with McGhee unwilling to step down they have extended his stay of execution on the back of a compensation demand they are allegedly unable to pay right now. The latest defeat has Aberdeen hovering just above the basement side Hamilton, who went down to Inverness 3-1 at New Douglas Park. The win ensured Caley kept up their recent run of good form and they remain undefeated in away league fixtures in close to a year.

Hearts added St. Johnstone’s scalp to their recent conquests with a 2-0 win in Perth. Kevin Kyle opened the scoring in what has been a brilliant week for himself, after he was included in Craig Levein’s Scotland squad for this weeks’ friendly against the Faroe Islands. Ryan Stevenson rounded off the scoring for Hearts in the 90th minute with a well taken effort.

After the aforementioned midweek upset Hibs continued their mini-revival with a Derek Riordan brace helping them to a 2-1 win over Motherwell at Easter Road. ‘Well could have jumped to third with a win but they failed to capitalise on Nick Blackman’s early leader. Riordan then ran roughshod over some clumsy Motherwell defending and had his two goals bagged before the interval.

At Tannadice ex-UCD striker Conor Sammon continued his rich vein of form as he grabbed Kilmarnock’s goal against Dundee United. Killie were caught napping from the resumption of play, however, and within a minute Johnny Russell had stole in to prod home the equaliser.

Elsewhere, as Scotland prepare to take on the Faroes in tonight‘s friendly, Craig Levein has stated his intent to find possible new recruits to bolster his sides’, thus far, tumultuous Euro qualifying campaign. Levein plans to start Wolves’ defender Christophe Berra at centre-half alongside Gary Caldwell in the friendly at Pittodrie.

Given the Faroes’ spirited result against Northern Ireland last month this is a potential banana skin for a Scotland side who will be experimenting in the wake of a poor performance against other minnows (Liechtenstein) of late.

“That’s always the case in matches like this,” said Levein. “But I want the opportunity to work with the players again and I want to get to know them.

“This is an A game. It gives [players] a Scotland cap in recognition of what they are doing at their clubs. And if we can find one or two that can be part of the group then it has been successful.”