An excellent two-goal comeback by ten-man Chiang Rai United to stump a previously rampant Buriram United provided the perfect setup for what is widely expected to be one of the craziest Thai League seasons in recent memory. 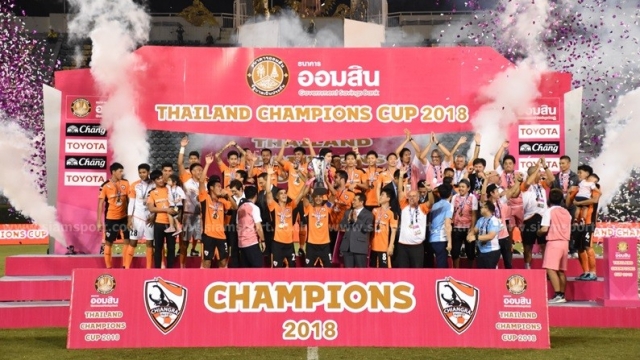 Buriram United, the defending Thai League Champions, took on FA Cup winners Chiang Rai United, in the fabulously named ‘Thailand Champions Cup’ at the Supachalasai National Stadium in Bangkok last week, with the result likely to send shockwaves across a nation gearing up for the start of its domestic league in two weeks time.

Buriram opened the scoring after a dominant opening period, with new signing Edgar Bruno Da Silva linking up with long time fan favorite Diogo Luis Santo to put the Thai Champions ahead after only four minutes. The ‘Thunder Castle’ would add a second just over 17 minutes later, and looked far and away the better side.

Despite being reduced to ten men when Chiang Rai Unite defender Atit Daosawang accumulated two bookings in quick succession, the side from Northern Thailand fought back in style.

New signing Cleiton Silva played an excellent pass to set up Siwakorn Tiatrakul just before the half time break, before fellow debutant Victor Cardozo scored from a corner to level the score shortly after the hour mark.

The drama continued in the dying minutes, due in no small part to a contribution from the first ever use of the Video Assistant Referee in Thai football.

Diogo received his marching orders when we was judged to have lashed out at Piyaphon Phanchikul as the tension in the stadium grew even greater.

It seems as if the moments in which the referees intently stare at their screens as entire stadiums hold their breath are to set become a fixture in football.

As the 90 minutes drew to a close, Chiang Rai United were able to withstand the pressure from an incensed Buriram side, taking the game to penalties.

The ‘ABBA’ system turned out to be yet another modern invention that greatly added to the spectacle, as it significantly elongated the process, allowing every single player in the team to take a shot from the spot before finally settling the matter.

Chiang Rai’s newest superstar signing Cleiton Silva missed the first penalty, but was given a chance to redeem himself as he ultimately put away the winning spot-kick to send his supporters into delirium.

The result of this ferocious encounter will most certainly have lasting impacts on the Thai League, but exactly what those topics will be is certainly a point of contention.

Chiang Rai now have two pieces of silverware to build on going into next season, including their FA cup triumph at the end of last year.

Pre-season was difficult for ‘The Beetles’, as the squad was massively overhauled and replaced with players who had more experience playing in the Thai League.

Their starting lineup seems slightly stronger than last season, but it is the perceived weakness of their potential rivals that they will be hoping to capitalise on.

Bangkok United look far less formidable this time around, after losing Dragan Boskovic, who scored 38 goals in 33 games last season, and Mario Gjurovski, who contributed to a goal every 70 minutes.

Muangthong United are also set to lose three of star players for the upcoming season, with Teerasil Dangda and Theerathon Bunmathan moving to join J-League Sanfrecce Hiroshima and Vissel Kobe respectively, while goalkeeper Kawin Thamsatchanan has already signed a permanent deal with Belgian side OH Leuven.

That being said however, it would be foolish to write off either of those sides going into the new season.

However, if the title race is going to go down to a two-way tussle between Buriram and Chiang Rai, a precedent has already been laid down for a remarkable title race.

With a large number of Chiang Rai’s players having once represented Buriram, including newly signed star striker Gilberto Macena and coach Alexandre Gama, the rivalry is likely to run deep when the sides meet again the upcoming season.