it’s very, very early into the 2015-16 Ligue 1 season so any overarching analysis must be taken with a massive grain of salt. We’re only 5.3% through the season and as last season proved for a lot of teams, nothing can really be deciphered with any sort of validity until perhaps 10 weeks into the season.

That being said, it’s been curious to see how Lyon has reshaped their attack for this season. Lyon sold winger/forward Clinton N’Jie for around €17 million after just completing his first season in Ligue 1 last season. Claudio Beauvue was brought on earlier this summer from Guingamp and Lyon only a few days ago signed Mathieu Valbuena from Dynamo Moscow.

The moves themselves make a lot of sense. I’ve written about Clinton N’Jie previously and how divisive he is as a prospect. I’m more Pro-N’Jie than most people but €17 million for only one season of production is very good business even if N’Jie realises his potential and becomes doubled that worth.

Lyon used some of that money to sign Valbuena, who has a proven track record as a playmaker in Ligue 1 and had a good season in 2013-14 when he was last in Ligue 1 with Marseille: 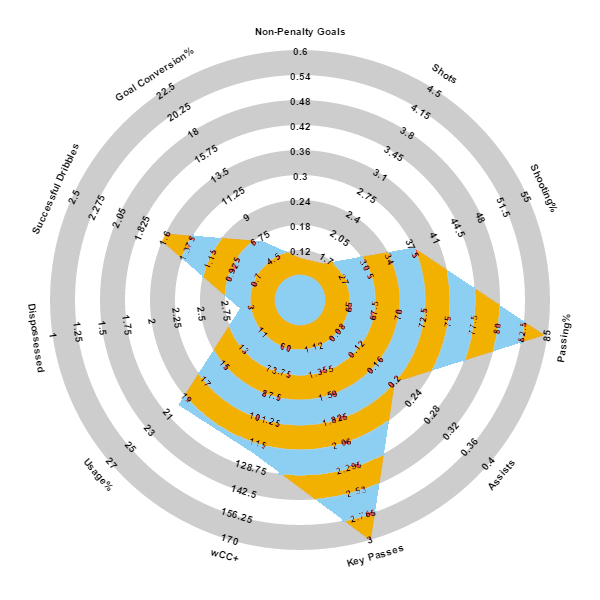 Valbuena debuted on Saturday against Guingamp in Lyon’s customary 4-1-2-1-2 formation in behind Nabil Fekir and Alexandre Lacazette. On talent alone, this could be the most fearsome attacking trio in Ligue 1.

Mathieu Valbuena has a credible profile as a creative playmaker whether as a winger or as a #10. Nabil Fekir is a special talent, perhaps one of the best talents to ever come out of the Lyon academy and Lacazette is the best striker since Karim Benzema in the late 2000’s.

It was only one game but the attacking prowess from Lyon was very subpar with Valbuena on board. Lyon only created 11 attempted shots against Guingamp, netting an expected goal value of 0.64. Only two shots from Lyon came from the central part of the penalty area and the entire six yard box, otherwise known as the danger zone.

Through the first two games this season, Lyon are ninth in expected goals for and seventh in shots coming from the danger zone.

More importantly, the attack against Guingamp and in the second half of their season opener versus Lorient looked clumsy, uninspiring and the total antithesis of the squash buckling Lyon side that gave PSG a genuine title fight last season.

Even though there was a lot of evidence to say that some of that squash buckling goodness was just Lyon over performing, they sure as hell looked a lot better  back then than they do now.

The only offense that Lyon have seemed to create through the first two games has been from magical moments that Fekir has created. Again, Nabil Fekir is a special talent and him having the ball is generally a good thing.

But if your entire attack rests on him having to do something with the ball, it can lead to results like the one against Guingamp, where a lucky bounce to Beauvue for his goal ended up being the game winner late in the match.

Valbuena himself was more or less a peripheral figure in the match and looked somewhat uncomfortable in the new Lyon setup. Obviously this is normal for a guy who just joined less than a week ago and got rushed into the side to start against Guingamp.

He should feel slightly more comfortable come next weekend once he goes through a full week of training with the club.

However there is a genuine question even with more time for Valbuena to get acclimated with Lyon, just how well the Valbuena/Lacazette/Fekir trio will work out this season.

Valbuena’s signing means that Beauvue will likely be used more as a substitute for Lacazette when Lacazette isn’t able to play, which is probably the best role for him on Lyon. Beauvue wasn’t particularly impressive versus Lorient last Sunday as he and Lacazette as a front two failed to compliment each other.

Lyon last season crossed the ball the least per game, created the second fewest chances from corners per game and attempted the third fewest headed shots.

One of Mathieu Valbuena’s greatest strengths as a playmaker is his ability to cross the ball from wide areas into the danger zone and create headed opportunities, whether on dead ball situations or in open play. This is Valbuena’s chance creation map back in 2013/14 with Marseille: 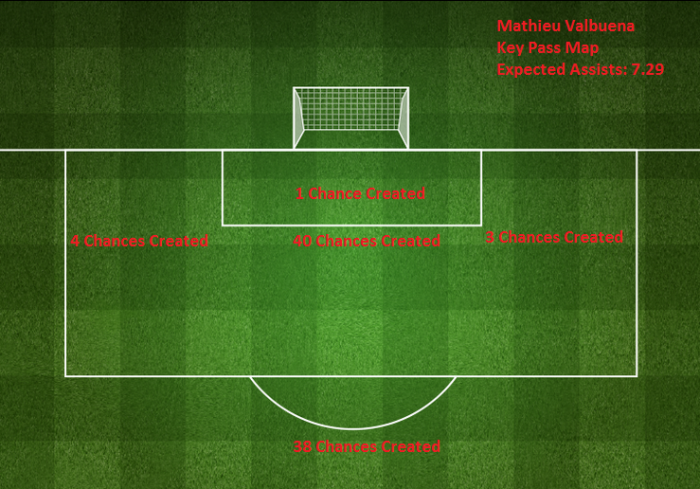 Overall, 31 of the 40 chances created by Valbuena in the danger zone ended up in headed shots. Now if Lyon will somehow try and play the Beauvue/Lacazette combination more often, perhaps this could be massaged some more cause Beuavue is a very good header of the ball.

But if not, it seems like Valbuena will have to alter his game quite a bit to blend in with others, which at that point how much is Valbuena’s natural game being compromised.

It’s only one match and all the potential issues outlined here could simply amount to nothing. Valbuena might not have to alter his game at all and the Lyon trio could wreak havoc on Ligue 1 and the Champions League this season.

However, if the issues exhibited against Guingamp continue to persist and aren’t a one-off, Valbuena will more than likely have to alter his game if Lyon want to have a second straight successful season.