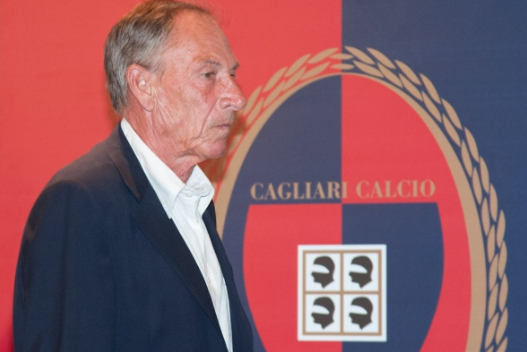 Roma’s goalkeeper Mauro Goicoechea rolled the ball out to Daniele De Rossi, who carried it forward into midfield. Having considered playing a long sweeping pass upfield, Roma’s vice-captain instead knocked a short ball into Marquinho, who quickly curled it to Eric Lamela, stationed wide out on the right.

Michael Bradley, the central midfielder, did not think twice about charging forward to provide Lamela with an overlapping run; in doing so, Bradley joined the Argentine, De Rossi, Marquinho, Francesco Totti, Dani Osvaldo, Dodo and Ivan Piris inside the opposition’s half.

The move soon broke down and the loose ball fell to Cagliari’s Victor Ibarbo, who collected it in his stride and drove forward on the counter. Roma’s defensive structure was non-existent – the team’s shape chaotically fragmented. Marco Sau was picked out twenty yards from goal and, although the striker’s dipping effort came back off the crossbar, his team-mate Francesco Pisano followed in untracked to sweep the ball past Goicoechea and give the Sardinian visitors a 4-1 lead.

Marquinho fired in a late consolation, but the damage was done: Roma’s manager, Zdenek Zeman, in his second spell with the Giollorossi, was sacked the next day. It was, the Czech later admitted, one of the most disappointing moments of his career. Two years on, however, and Zeman would not mind a repeat of that scoreline this weekend.

When Roma meet Cagliari at the Stadio Olimpico on Sunday, Zeman will be in the away team’s dugout. The 67 year-old was unveiled as the Rossoblu’s new manager at a press conference alongside the club’s new owner Tommaso Giulini in June, ushering in an exciting new era for fans of the Sardinians. Despite his failings at Roma – Cagliari’s supporters, who witnessed just one away win throughout the whole of last season, will not forget that famous 4-2 victory in 2013 in a hurry – and despite a winless start to this campaign, there is something thrilling about Zeman, a chain-smoking eccentric unyielding in his commitment to attacking football.

“A horizontal pass is futile”, Zeman exclaimed in an interview shortly after being appointed as Roma manager for the second time in 2012.

In my football I try to eliminate futile things. We must always try to do something with meaning.

Zeman admits that he is impatient, disregarding a possession-based game on the basis that it gives the opposition time to set themselves up defensively and close off any gaps that could otherwise be breached; instead, the veteran manager advocates direct attacking, his players wired to move the ball forwards at every opportunity. Zeman’s sides play a hard-running, high intensity game at breakneck speed, pressing high to win the ball back and then immediately looking to exploit holes in their rivals’ setup.

Defending is a secondary consideration and largely manifests itself in the last-ditch form, with little evidence of an overriding strategy to close off angles or cover space efficiently. All resources are dedicated to going forward, an approach that is rarely adapted or tailored to the particular opposition or changing circumstances of a given game.

“Whenever we attack”, Zeman explains, “all three forwards have to be in the penalty area while two of the three midfielders come forward too. That way, the opponent is pinned back, and once the ball gets into the box, we are more likely to score because we have more men there”.

The openness of this brand of football may be exhilarating, but it has its pitfalls too. “Zeman really is a dreamer”, pundit and ex-midfielder Massimo Mauro exclaimed after Lazio comfortably dispatched of Roma in 2012. “Always the same football, always the same defeats, yet he never takes a step back”.

Zeman has been dubbed the ‘Beautiful Loser’ in his adopted homeland, and it is true that his aim to overwhelm each and every opponent with relentless attacking is wholly impractical. The lack of sensible balance in the 67 year-old’s teams has meant that Serie A clubs have tended to look elsewhere when appointing a new coach: between late 2000 and landing the Cagliari job this summer, Zeman spent just nineteen months in charge of a team in the top-flight of Italian football.

The ‘Beautiful Loser’ tag does not appear to bother the Czech, though, the former PE teacher asserting that “there is nothing dishonourable in coming last if you do so with dignity”. He certainly has a point, and it is wholly incorrect to proclaim, as some do, that history only remembers the winners – Holland in 1974 and Brazil in 1982 have proven that losers can leave a lasting impression, particularly in a low-scoring sport such as football where dominance does not always translate into goals.

There is, moreover, something enchanting about Zeman’s belief that managers are not duty-bound to merely win games, but also to provide the watching public with an entertaining spectacle and an abiding memory that transcends the result. This philanthropic view of football as a public good is refreshing, yet it is curious that Zeman – a romantic idealist with grand visions of football as a social commodity who refuses to compromise his attacking principles – has spent almost his entire career in the Italian game, traditionally obsessed with the result and nothing else.

Cagliari will be hoping that an entertaining style of football does not come at the expense of points on the board this campaign. Lining up in Zeman’s customary 4-3-3, the Rossoblu have been predictably attacking in their opening two games, yet remain without a win after a 1-1 draw with Sassuolo and a 2-1 home defeat to Atalanta.

Nevertheless, the front three have shown promise, Diego Farias and Andrea Cossu providing speed and direct dribbling on the flanks and Marco Sau troubling centre-backs with clever movement and excellent link-up play. In midfield, club legend Daniele Conti has great responsibility as the deep-lyer, collecting the ball from the central defenders and moving it forward as quickly as possible while his partners Lorenzo Crisetig and Albin Ekdal focus on making late runs into the box or moving laterally to overload the wide areas.

Cagliari’s pressing is relentless and often unconditional, and can lead to the midfield three being dragged out of position as they harry opponents. When this is combined with the offensive nature of the full-backs Antonio Balzano and Danilo Avelar – whose overlapping runs allow Farias and Cossu to move inside and flood the penalty area – it can force the centre-backs, Luca Rossettini and his namesake Ceppitelli, to defend one-on-one against rival forwards on the break.

Given Zeman’s obsession with verticality, a form of what Louis van Gaal terms ‘provocative pressing’ may suit Cagliari better: rather than attempting to win the ball back as high and often as possible, Cagliari could entice the opposition up the pitch by allowing them to move forward freely, before launching collective pressure to win the ball back followed by quick passes in behind to exploit the space vacated.

For Zeman, though, any change in style – however minor – would be an admission of defeat.  A slight dilution of Cagliari’s aggressive proactivity would certainly improve their defence solidity and make them a more rounded team, but there is little chance of it happening under the Czech, calcio’s biggest fundamentalist.

The football served up at the Sant’Elia is sure to be thrilling, and Zeman certainly seems better suited to a club of Cagliari’s standing, away from the pressure and shining lights that engulf the country’s major sides: the Rossoblu are a solid Serie A outfit, but they lack the prestigious history and pedigree of the likes of Roma, Lazio and Napoli, three of Zeman’s former clubs.

Indeed, it is further down the ladder that the 67 year-old has enjoyed much of his success, his most notable achievement coming in the early 1990s when he led Foggia into Serie A and then almost into the UEFA Cup in their debut top-flight campaign. Taking Cagliari back into Europe for the first time in over twenty years would rank among Zeman’s greatest ever accomplishments. But, for now though, a 4-2 win at Roma would more than suffice.