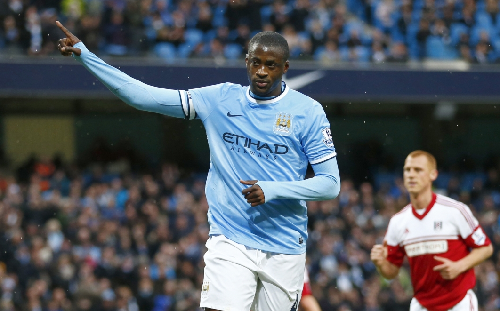 As Yaya Toure tore through the Aston Villa defence to score his 20th league goal of the season last night, it wasn’t just City fan who sat back and marvelled at what was yet another moment of magic from a player who has been one of the most dominant forces in the Premier League.

How can a man so big move so fast? How does he have such quick feet and guile to go with the raw power? Yes, it was against a side already 3-0 down in injury time but that shouldn’t take away from the brilliance of the Ivorian’s solo effort.

Manchester City fans have been privileged to watch the soon-to-be 31-year-old light up the Etihad Stadium for four seasons now and if anything, he just keeps getting better and better.

With one game to go against West Ham United on Sunday, Toure is only the second midfielder to reach the 20-goal mark in a single Premier League season after Frank Lampard in 2009/10.

He has attempted (2333) and completed (2093) far more passes than any other player in the league this season, with a very impressive 90% accuracy, and also chipped in with eight assists.

A spot in the PFA Team of the Year was the least that the Toure deserved for guiding City to the brink of their second Premier League title in three years, and it was baffling to see him end up third behind Steven Gerrard in the Football Writers’ Player of the Year award (Luis Suarez was first).

Even though plenty are now lauding Toure’s performances, it’s worth remembering that when he was signed in the summer of 2010 the knives were firmly out in certain quarters.

Toure is not actually that great. He’s not a creative genius who will get backsides off seats but a defensive midfielder who stops players who can.

While hindsight is a wonderful thing, the above from award-winning journalist Brian Reade in The Mirror couldn’t have been more wrong in his assessment of Toure, who can now consider any critics firmly answered.

Indeed, his influence has been so strong in games that matter over the past four seasons that he has been bestowed with the nickname “Mr. Wembley” for the performances that ended City’s trophy-less drought.

In the 2011 FA Cup semi-final against rivals Manchester United, it was Toure who came up with the winner, a low angled shot past Edwin van der Sar in a tight 1-0 win.

Just weeks later in the final, he was again on hand to slam home a shot from inside the penalty area to see off Stoke City.

Last year he put in a Man of the Match performance at Wembley as City beat Chelsea to again reach the FA Cup Final but, like so many of his team mates, was off colour as they surprisingly went down to Wigan Athletic by a single goal.

Toure went a long way to making up for that in March of this year as it was his long-range stunner that proved to be the catalyst for a comeback win over Sunderland in the Capital One Cup Final.

Of course, the Community Shield is another prize played for at the home of English football and Toure bagged the opener in the 3-2 win over Chelsea in August 2012.

It’s not just in the cup competitions that his importance has been felt; when City beat United 1-0 on their way to the league title in 2012, it was Roberto Mancini’s often utilised tactic of pushing Toure forward behind a lone striker that kept Sir Alex Ferguson’s side at bay as they chased a vital equaliser.

City began that game with both Sergio Aguero and Carlos Tevez up front, and when the time came to introduce Nigel de Jong to tighten things up, it was Tevez who made way and Toure who was pushed into a more advanced position.

When goals were needed in the penultimate game of the campaign against Newcastle United at St. James’ Park, it was Toure who delivered a brace and that win left the destination of the Premier League trophy in City’s hands.

Mancini was notoriously conservative when he took over from Mark Hughes in December 2009, using de Jong, Gareth Barry, and Patrick Vieira in holding roles as he built from the back first.

Having played as a centre back shortly before leaving Barcelona, Toure was typecast into a defensive role by plenty, including Brian Reade, when £24 million was paid for his services.

…giving a quarter-of-a-million quid every seven days to a defensive squad player who no other club would have touched for that kind of money and whose name won’t sell shirts, is insanity on a previously unimagined scale.

Ignoring the part about selling shirts, Reade did have a point when it comes to the money City were willing to stump up to get Toure to join, and no doubt it was part of the reason he chose to move to England from the Spanish giants.

It was evident though from his early games as a City player that Toure was not going to be the shield in front of the back four, and he played closer to the strikers than the back four.

While there has been some frustration at his languid demeanour on the field, it is very rare for him not have some influence on a game.

If Manchester City go on to win the Premier League this Sunday as expected, they stand to make close to £100 million in prize money. With that in mind, the wages being paid to a man once seen as a glorified defensive midfielder don’t seem so bad.