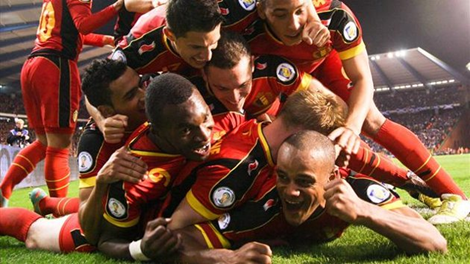 Football is not the first thing one things of when someone mentions Belgium. Instead, the mind tends to think of Chocolate or Ale, or even Tintin and Poirot. With no World Cup appearance since 2002, and no appearance at the Euros since 2000, perhaps this thinking is justified. However, there are a number of footballers that can perhaps help Belgium become a great football nation in the next few years.

The man to replace Petr Cech, perhaps. Courtois was purchased by Chelsea from Genk in 2011. He is currently playing on loan to Atletico Madrid. Cech once described the keeper as the best young talent in European Football.

Kompany is the current captain of the national team and his club side Manchester City. In recent seasons Kompany has become one of the best defenders in the Premier League, and has been just as important for his national side.

The first of many to have learnt his trade at Ajax in Amsterdam, Vertonghen was made captain of the Dutch giants before transferring to Tottenham in 2012. Vertonghen is solid in defence and capable of sneaking forward to score impressive goals.

Vermaelen is another of Belgium’s defenders to receive the armband for his club side. After five years at Ajax, Vermaelen transferred to Aresnal in 2009, and after the departure of Van Persie became their captain. He has proven to be a very competent defender in recent seasons.

Before Vertonghen left for London, Alderweireld paired up well with his national team partner in a solid Ajax defence. Alderweireld is a very talented player, learning his trade in the Ajax youth team since 2004, and is aggressive and strong on the ball.

De Bruyne was purchased from Genk in 2012 by Chelsea. Currently on loan to Werder Bremen in the Bundesliga, de Bruyne has shown himself to be an adaptable footballer, capable of playing in the central midfield, attacking midfield or winger roles.

Witsel was an important player in the Benfica side that reached the 2011-12 Champions League quarter-finals. The midfielder transferred to Zenit in 2012, and has already impressed the Russians by scoring a number of important goals.

While playing for Standard Liege, Fellanini won the 2007-08 Belgium league. Since arriving in England in 2008 the Belgium midfielder has impressed many with his ball control and on-field versatility.

Hazard was an important player in Lille’s 2010-11 Ligue 1 triumph. Since moving to Chelsea in 2012 he has become a fan favourite, with his brilliant flair in the attacking midfielder or winger roles. Under RDM Hazard was often employed in the dynamic midfield three that pulled apart many defences.

Mirallas developed his football in the Standard Liege youth team, before transferring to France, Greece and finally to England. Since arriving at Everton in 2012, Mirallas has been a consistent player frequently relied on to come off the bench as an attacking winger.

Chelsea purchased Lukaku from Anderlecht in 2011, and comparisons were immediately drawn between the 1.9m tall striker and Chelsea’s own Didier Drogba. Lukaku is currently on loan to WBA and has already scored a number of important goals.

4 thoughts on “XI reasons Belgium can become a great team”