Mesut Özil has come under yet more widespread criticism due to his recent performance for Germany against Algeria. Despite netting the decisive goal, Özil was below par throughout. Any stats regarding him completing the most passes in the final third, or creating the most chances are simply hiding away from a hard truth. Stats like these, and indeed his goal, can easily be cherry picked and manipulated to find some merit in every players performance, but for all watching the match – it should have been apparent that something was clearly wrong. 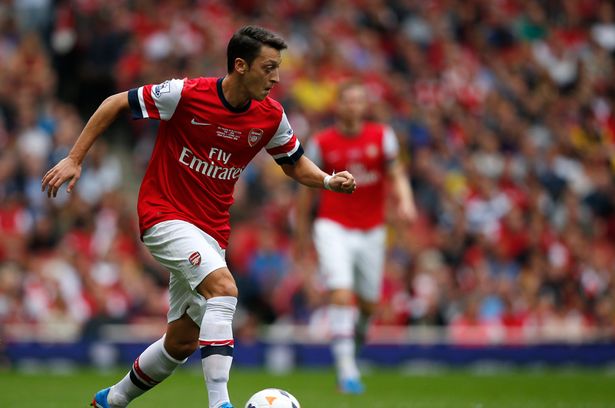 Back in February I wrote an article in defence of Özil after the Arsenal – Bayern Munich game at the Emirates, as I felt (and still do) that he was unfairly singled out, not for the first time, when the team had been outplayed. Certainly, play with ten men up against Bayern Munich – with Yaya Sanogo in front of him – there was little for Özil to do – and he won the penalty he saw saved, so that puts that argument to bed.

Yet, on Monday night, I feel the criticism was in part deserved. Yes, it was difficult for him: having to play out of position in a very poor Germany team on the night warrants some sympathy. But, the Özil of a year ago (or indeed the last World Cup) would have thrived off such a game. The old Özil would have probably still drifted in and out of the game, but would have found that defence splitting pass in the 120 minutes, if not the 90. Against a tiring and well organised but ultimately limited defence, he had the capability to be the difference but (as far too often) he just wasn’t. The fact he is yet to register a single assist this tournament is telling.

I often hear as a defence of Özil: ‘if you thought we were buying someone who would work 110%, be omnipresent etc… You clearly don’t know Özil.” But this is nonsense, the Özil of Real Madrid did not run into blind alleys, or misplace 10 yard passes, or fail time and time again with the same through ball idea. The fact is, he is not playing to his full ability and he only really has in a handful of games this season. Indeed, even that has been wasted a lot of the time as when he has produced a Madrid-esque performance, such as against United at the Emirates, Arsenal simply didn’t have the players fit and able to finish the chances.

So, what is wrong?

Well. There are several things that may be contributing, but I think the biggest factor is probably fatigue. In three seasons at Madrid, he only played the full 90 minutes 25 times. This year, he has completed 80 minutes or more 32 times. Add to that he hasn’t had a winter break (as his body is accustomed to) and he has had to adapt physically to the Premier League, you can see why this would have been a hugely physically challenging season for him.

The World Cup is probably the last thing he needed, let alone 120 minutes playing out of position in a team that was certainly doing him no favours on the night. He does need to adapt to the Premier League and a more physical style but as the experience of many Premier League success stories shows, the second season is often far more productive than the first, Dennis Berkgamp certainly springs to mind. This is why it would probably be more objective to judge him in the second season rather than the first. Thus, fitness and a new physical challenge for him is likely the first factor diminishing his perceived level of performance.

The second factor is his teams. Both Germany and Arsenal have a common problem, their strikers. Germany have so many talented midfielders that Özil was actually forced out wide yet in neither side can you find a world-class finisher with a bit of pace who will thrive off Özil’s service. Klose is fantastic but he cannot play 90 minutes in those conditions and Müller tends to create his own chances rather than working off a provider. In reality, the closest Özil has got to the kind of players he had at Madrid (Benzema, Higuain, Ronaldo) is probably Theo Walcott – and it is telling that in the one (and only) game where both Özil and Walcott have played 90 minutes together, at the Stadium of Light, Özil created three clear-cut chances and got an assist, a performance fully deserving of the man of the match accolade on his debut.

If next season Arsenal are able to sign someone who can thrive off of this, as well as keeping Walcott fit, we may well see a whole new Özil. Of course, the natural counter argument to this is that ‘if Özil was truly world-class he wouldn’t be dependent on the players around him’ – and there is an element of truth here, but consider his, who are the top number 10s in the world? Make a mental list of three. I suspect Silva, Koke, Isco, Mata, Fabregas are all recurring themes. Now ask yourself how many of these have flourished without fast, clinical players in front of them. Very rarely, if ever, will you find these any of these players without significantly better support in the team than Özil was left with when Walcott, Ramsey, Chamberlain, Wilshere et al all seems to simultaneously get injured. Yes, the best players in the world look good even in average team, that is why they’re the best – but for playmakers especially, it is important not to underestimate the value of the players around him. At the moment, for both club and country, Özil doesn’t have the right ones.

The third factor, and the greatest of all, is that Özil hasn’t actually been that bad. Now this isn’t hypocritical, as I accept that against Algeria he was well below par – most notably in the second half – and the same can be said for many of his Arsenal performances. He’s probably only replicated the ‘Madrid Özil’ on about five or six occasions for Arsenal, and only once against a big team.

That said, despite what you will probably hear, Özil was absolutely not the worst player in that Germany team on Monday. Schweinsteiger was anonymous, Müller was barely a two out of ten, the two full backs were failing in both their attacking and defensive duties, leaving Mertesacker and Boateng massively exposed to such an extent that Neuer was operating as a third centre back on occasion. When criticising Özil, a sense of perspective is needed I feel.

It is right to call him out if it he is holding the team back, or seriously underachieving whilst keeping more deserving players out of the team, but this has not been the case when he has been criticised. I seem to remember one game where he came under particular scrutiny was when Arsenal lost 5-1 at Anfield. Does anyone else find that absolutely ridiculous? Arsenal lost 5-1 with no holding midfielders and a left back in Monreal who wouldn’t have been able to track Sterling with a stun gun and a large coil of rope, yet it was Özil who got singled out.

If next season Özil fails to perform for Arsenal, and in doing so denies talented players like Chamberlain, Cazorla and Wilshere from playing in that position behind the striker (all of whom have expressed their desire to) then it may be about time to drop him and even think about selling him back to Germany or Spain, but that sort of action is a long way off yet.

With a year’s Premier League experience, a good preseason (and hopefully a bit of rest) under his belt, and the right players around him – I remain confident we will see Özil thrive in the Premier League, in the same way he did at the start of last season before injuries, tiredness, media pressure and Giroud’s frankly annoying affair (for a while after this saga he barely looked a PL player let alone an Arsenal one) all began to negatively affect Özil’s performances.

With all of that behind him he still has the ability to recreate his Madrid form; with a new physical aspect to his game he may even become a better player. But this does need to happen sooner rather than later, the first step will be a match winning performance in the World Cup semi finals…

11 thoughts on “What is wrong with Mesut Özil?”