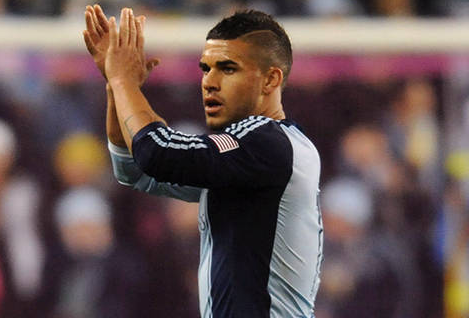 With David Beckham no longer a factor on the park in Major League Soccer, an opportunity has opened up for other English players to grab some of the limelight.

Two strikers in particular, Bradley Wright-Phillips of the New York Red Bulls and Sporting Kansas City’s Dominic Dwyer, have started the new season in great form for their respective teams.

While Dwyer is a relative unknown back in England, Wright-Phillips spent the early part of his career with Manchester City in the Premier League, scoring twice in 40 appearances.

After dropping down the divisions to play for Plymouth Argyle and Charlton Athletic, the 29-year-old turned down offers in England to head across the Atlantic Ocean in July last year.

“The standard would definitely surprise those who don’t follow the league,” he said of MLS.

“The Designated Players are obviously fantastic but the others are technically good as well. It’s physical, there are a lot of athletes, but teams try to play out from the back – the right way as far as I’m concerned.”

Last season’s top goal scorer for the Red Bulls was Tim Cahill with 11 goals but the Australian has never been an out-and-out striker and has spent time on the sidelines recently through injury.

Thierry Henry also hit double figures, while Fabian Espindola bagged nine but he has since moved on to DC United so there is a hole to fill.

Wright-Phillips took some time to find his feet, scoring just once at the tail end of last year, but has hit the ground running for the 2013 Supporters’ Shield winners.

Indeed, just last week he became the first Englishman to score an MLS hat-trick when he netted three times against the Houston Dynamo.

“If I’d known it had never been done before, then I don’t think I would ever have managed it – I’d have been trying too hard,” he said of the milestone.

“It’s something I can now look back on, something that’s always going to be there no matter what. My dad [ex-Arsenal striker Ian Wright] and brother Shaun have both sent me congratulatory texts.

His partnership with Henry and the imminent return of Cahill gives the Red Bulls, who started the season with some disappointing results, one of the league’s most potent forward lines.

Wright-Phillips’ fellow countryman Dom Dwyer is also enjoying his time in the States, though his road to MLS was a bit more complicated.

The 23-year-old has become a mainstay in the Sporting Kansas City starting line-up this year but had to work hard to get his shot at the big time.

Born in West Sussex, Dwyer spent time with Norwich City’s academy before moving to the US in 2009 to try an alternative career path.

He excelled at college level and his performances for the University of Florida ultimately led to him entering the 2012 MLS draft where he was selected by SKC near the end of the first round.

“I remember a lot of people saying to me that if I go to America, then my football – or soccer – career is done,” Dwyer told Sports Illustrated last year.

“‘You’re never going to be a professional’; that’s one thing that stuck in my head. I had that from quite a few people.”

His rookie season yielded just 14 minutes of playing time before he became the benefactor of a new system that allowed MLS sides to align themselves with third-tier clubs.

A subsequent relationship with USL Pro side Orlando City, who will join MLS in 2015, saw Dwyer join bang in 15 goals in 13 league matches, as well as three more in the U.S. Open Cup.

After being recalled to SKC in June, he was a bit-part player for the rest of the season but did enough to earn a start in the MLS Cup win over Real Salt Lake in December.

Now, in 2014, he is leading the line for the competition’s reigning champions and bagged a brace in the recent 4-0 victory over the Montreal Impact.

“I was pleased to get a couple of goals, obviously,” he said after the game.

“I needed it. The last game, I thought I played well and was just unlucky. I thought that was coming again today, when the keeper saved it with his face.

“But I just kept going and got chances, and we closed the game out well.”

Both Dwyer and Wright-Phillips will be keen to keep their early season form going for what are expected to be two teams challenging for MLS Cup come the playoffs in October.