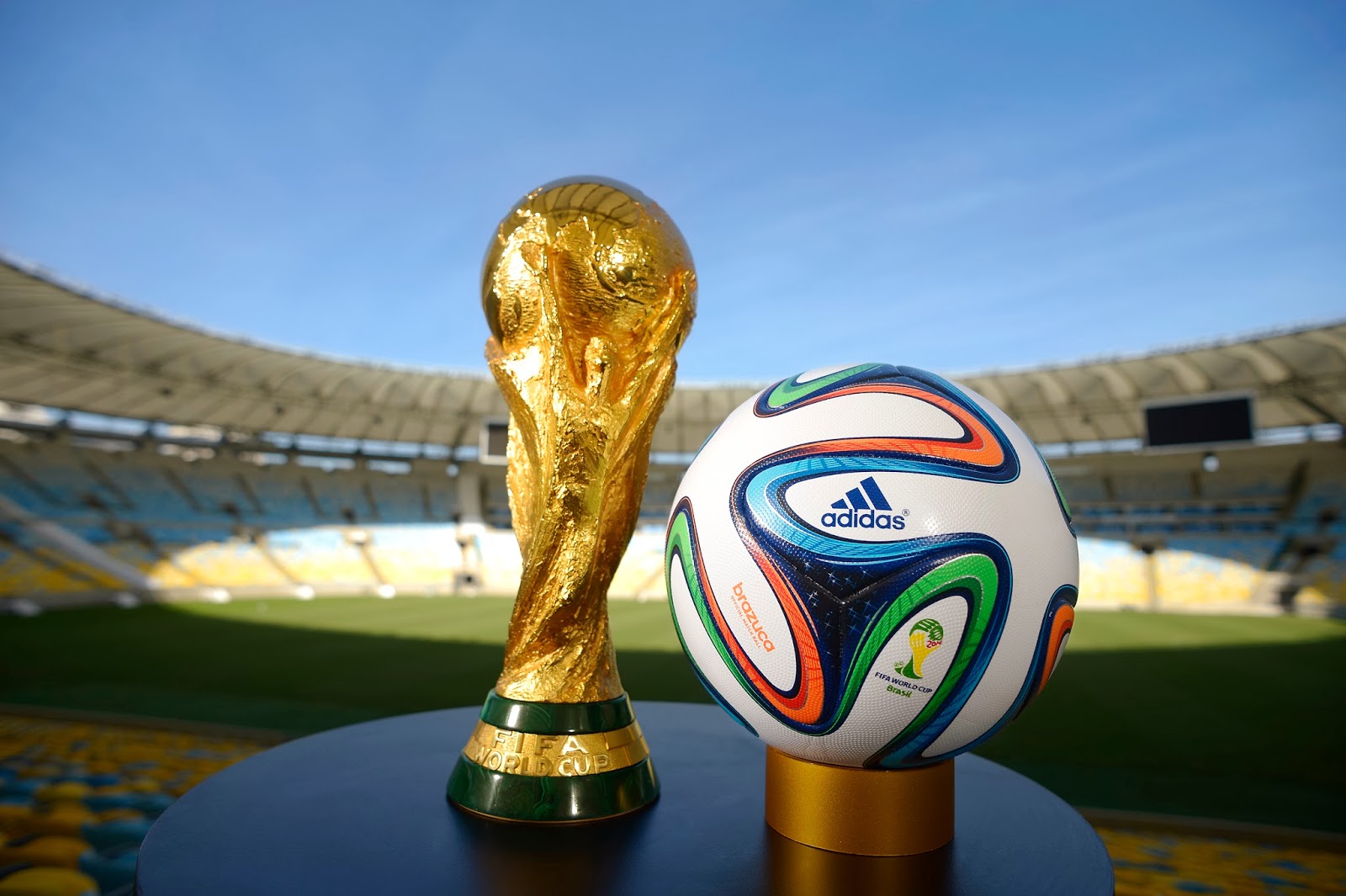 A – Absentee IX Let us begin by bowing our heads in reverence for those who will not be with us at this summer’s tournament –  Petr Cech, Ashley Cole, Marek Hamsik, Kevin Strootman, Arda Turan, Gareth Bale, Radamel Falcao, Zlatan Ibrahimovich, Marco Reus and, most heart rending of all, The Republic of Ireland and its traveling green army.

B – Brazuca We’ve had the Tango, Tricolore, Teamgeist and Jabulani. Now we have the Adidas Brazuca. It boasts numerous technological features and a snazzy design, but none of that will stop goalkeepers (Who aren’t sponsored by the German manufacturer) complaining about it before the first round of games are over.

C –  Caipirinha Forget all of that ‘Budweiser™ – official FIFA beer sponsor’ malarkey, immerse yourself in Brazilian culture whilst enjoying the action with a cool Caipirinha, the national cocktail. Made with Cachaça, sugar-cane based spirit, a few of these will make even Honduras V Switzerland a classic.

E – El Cole: The Birdman Fans of a certain ‘vintage’ will go misty-eyed at mention of Colombia’s Birdman. Columbia’s return to the World Cup after a 16 year absence will allow a whole new generation to experience the multi-colour ornithological lunatic for the first time.

F – Fuleco the Armadillo The World Cup’s official mascot, based on the tatu-bola armadillo that rolls into a ball to defend itself. According to FIFA “Fuleco is a confident, proud Brazilian armadillo. Although he does not talk, he is very curious and extroverted, adventurous and loves to explore everywhere he goes”. Fair enough.

G – Group of Death Equally obligational as dark horses is the labelling of a particular group as one so impossibly difficult it may have been drawn by lucifer himself. The term originates from Mexico 1970 and has stuck ever since. This year’s tournament sees the ‘Group of Strewth!’ as Australia have drawn Spain, Chile and The Netherlands.

H – Heat Four years ago in South Africa, despite plugging our ears with vuvuzela-proof cotton wool, something didn’t sit right with us. For a World Cup it seems just plain weird seeing players donning thermal wear on the pitch in front of spectators clad in overcoats. This summer sees a welcome return of blasting heat, including Manaus where humidity reaches a doctor-bothering 78%.

I – Injuries Despite the conspicuous absence of metatarsal talk, injuries in lead up to the tournament has already claimed noticeable absences including The Netherlands Strootman and Colombia’s Falcao. Expect the heat and passion to claim a few more high-profile names before the trophy is lifted in July.

J – Juntos num só ritmo™ (All in one rhythm™) The Official Slogan of the FIFA World Cup™ decided upon by a joint FIFA-Brazil Ministry for Sport committee which is apparently aimed at conveying the soul,fun and rhythm of a Brazil-based World Cup, and in no way yet another example of FIFA’s™ attempts to trademark™ every™ single™ word™.

K – Klose This summer’s tournament will be the German striker’s fourth World Cup, in all probability his last chance to break the World Cup goalscoring record. The (soon to be) 36-year old isn’t expected to be a starter, but a mere two goals will bring his tally to 16, breakage Ronaldo’s record.

L – Logo Wars Since 1998 a war has been raging in football. After Europe, Asia and Africa the battleground has reached South America. Nike come into this tournament leading the way with the majority of kits emblazoned with its ubiquitous tick logo, but don’t expect German rivals Adidas to go down without a fight.

M – Maracanã If Wembley is the home of football, then the Estádio do Maracanã is where football heads for a break from the mundane. Newly refurbished, the arena may not hold the same capacity as it did for the 1950 tournament, but still retains the allure and history that has made it one of the most iconic in the world game.

N – National Anthems Standing tall prior to each match, who will sing theirs the loudest? Who will stand silently, with a face like thunder? Who will shed a tear? Which Anthem will win your approval? France’s rousing La Marseillaise? The teary-eyed Star-Spangled Banner? Or perhaps the blood-soaked lyrics of Algeria’s Quassaman?

O – One-Colour Kits Gone are the blue Spanish shorts, the navy England ones. New rules from FIFA means all teams will be wearing the same coloured jerseys, shorts and socks. It’s just not the same anymore, goddamit.

P – Protests The citizens of Brazil haven’t exactly welcomed FIFA’s travelling carnival with open arms. Images of protesters lining the streets in Brazil have popped up in recent weeks, will there be more when it kicks-off – potentially causing havoc to schedules and transport?

Q – Qualifiers A total of 203 teams attempted qualification for this summer tournament, so the 32 countries can count themselves as a privileged bunch. The likes of Germany and the Netherlands qualified with ease, but won’t have such comfort in difficult group stages. Uruguay and Ecuador finished lowest of the South American qualifiers but are hotly tipped for progression into the last sixteen.

R – Referees Howard Webb put himself in the spotlight in 2010 with a questionable final performance, particularly for not sending off Nigel de Jong for his karate kick. There’ll be no Frank Lampard repeats however, as goal-line technology is finally in full flow.

S – Seleção There is a giant cloud of expectation hanging over the Brazilian national side as they go in search of their sixth world title. Luiz Felipe Scolari has returned to try to guide the team to glory, having done so in 2002. Gone is the aging squad that fell flat in South Africa, introduced is a younger generation dominated by talent at the top of Europe’s elite. All the conditions suit A Seleção for success, they have the home fans and the star in Neymar. It’s theirs to lose.

T – Tactics Strikerless teams, false 9s, inverted wingers… it could all be put aside in a World Cup dominated by centre forwards. Diego Costa is the obvious one, but Edin Dzeko, Gonzalo Higuain and Daniel Sturridge will all have big roles to play for their respective nations.

U – USA! America’s World Cup preparation has been dominated by the decision to omit Landon Donovan, but otherwise they boast a talented squad which will showcase the strength of its domestic league. This is Jurgen Klinsmann’s first World Cup since guiding Germany to third place in 2006, if he can make the right USA show up they can throw some banana skins into a difficult group.

V – Vanishing Spray Don’t worry, Robbie Fowler. The white lines you’ll see scattered across the field is from the referee’s vanishing spray, which he uses to mark out ten yards from the point of a set piece which the wall will have to stand behind. It lasts for about one minute.

W – We are one (Ole Ole Ole) The Official World Cup Anthem by Rapper Pitbull featuring Jennifer Lopez, we apologise in advance… [youtube:”https://www.youtube.com/watch?v=TGtWWb9emYI”]

X – Xavi & Co. Xavi, Iniesta, Sergio Ramos, Iker Casillas, Fernando Torres et al. are aiming for their second World Cup winner’s medal and an astonishing fourth international title in a row. This dynasty is like nothing football has ever seen. They’ve done it before, have fresh talent in the ranks – can they retain the title?

Y – Youngsters From Raheem Sterling to Thibaut Courtois, Raphael Varane to Romelu Lukaku, the World Cup is absolutely heaving with young talent and will showcase some of the best young players in the world. Who’ll standout the most?