2006 World Cup finalists France will be looking to upset the odds again as Raymond Domench’s much un-fancied side take on South Africa, Mexico and Uruguay in Group A. Making his debut at a major international tournament, Yoann Gourcuff could become a global sensation in South Africa.

A graceful and elegant dribbler, Gourcuff began his professional career at Rennes, his performances brought a high-profile move to Italian giants AC Milan in 2006.

Despite originally being seen as the Rosseneri’s natural successor to Kaka’, chances were few and far between at the San Siro. The 23-year-old’s career has consequently been revived in his homeland with Bordeaux, helping them claim the Ligue 1 title in 2008/09.

While 2008/09 was certainly Gourcuff’s best to date with the playmaker chipping in with 12 goals and 11 assists to aid Bordeaux’s title charge, 2009/10 has been less straight forward with Laurent Blanc’s side limply surrendering their crown.

Recently Gourcuff has stated his respect for Blanc and believes if he were to leave then there would be a strong possibility he would follow.

“If he goes to a big European club, and he wants me, it could prove possible because I know him and I have worked with him.”

Although since the revelations, it has been announced that Blanc will join the French national team after the forthcoming World Cup, it leaves Gourcuff’s immediate future up in the air.

After making his international bow in 2008 against Sweden, Gourcuff’s growing reputation has led to him becoming one of the key figures in France’s tilt at capturing this summer’s World Cup.

Gourcuff, who plays just behind the frontline striker(s), has also been tipped to fill the void left by French legend Zinedane Zidane. The Ligue 1 player of 2009 was a regular throughout qualifying for coach Raymond Domench and is expected to continue in South Africa as of France’s main attacking outlets.

With such astronomical presences to follow, Gourcuff’s likeness to masters Kaka’ and Zindane may not have helped the youngster but with his natural ability and eye for goal it would surprise little in France if he were to make a significant impact on the 2010 World Cup.

Three-time World Cup winners Germany could be many punter’s outside bet for this summer’s tournament, despite a relatively modest playing squad, the Germans reached the semi-final in 2006 and final in 2002 respectively. 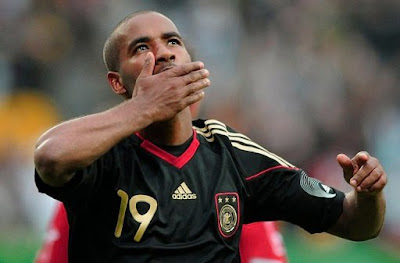 After scoring a recent brace against Malta, Brazilian-born Claudemir Jeronimo Barreto, or Cacau, may force his way into Joachim Low’s starting XI, despite only attaining a German passport in February 2009.

The 29-year-old failed to impress his native Brazil and opted to make himself available for German selection when he gained citizenship following a five-year spell in the country. In May 2009 Cacau was consequently called up for Germany and made his debut against China.

The striker went on to make just one start in qualifying, a 1-1 draw against Finland, although he has featured in the last two German friendlies and could provide a goal scoring threat for Low’s side in South Africa.

The Stuttgart forward has netted 13 goals in 19 starts in the Bundesliga this season and also impressed against Barcelona in the last 16 of the Champions League. Cacau, who is equally adept at playing just off the frontline, is renowned for his predatory instincts and ability to score with either foot.

In spite of Cacau’s late development on to the international scene, it’s fair to say a move away from Germany is unlikely after signing a contract extension until 2013. Although in March he had stated a desire to leave Stuttgart with Blackburn and Bolton reportedly interested.

With German coach Low, seemingly preferring one striker up front it could be a battle between Miroslav Klose, Mario Gomez and Cacau to lead the line in Group D of the World Cup.

Follow the rest of our World Cup articles here.