In the first of BackPageFootball’s World Cup scouting articles, Matthew Wood looks at players to watch from Algeria and Argentina.

Once proclaimed as the ‘next Zidane’ by supporters in France (and no, it’s not Bruno Cheyrou), now playing in Serie A with Lazio, Mourad Meghni could provide the creative spark to boost Algeria’s aspirations of making it into the knockout phase of the World Cup.

Originally born in France, Meghni played for his native country at youth level, including an under-17’s tournament, playing alongside Florent Sinama Pongolle and Anthony Le Tallec. Meghni became a sensation at youth level and was snapped up at the tender age of 16 by Italian club Bologna. Three years later and the youngster was making his debut in Serie A but Meghni explains the comparisons to the legendary Zinedane Zidane were too much.

“The injuries and associations with Zinedine Zidane have certainly not helped. Although I was obviously flattered to be mentioned alongside such an incredible player, even if I tried not to think about it too much, it inevitably put a little bit of added pressure on me.”

Bearing an ever-so-slight frame, Meghni has also had his fair share of injury problems and the playmaker’s best form at Bologna was often interrupted by a persistant back problem. In 2008 Meghni made the move to Lazio, and while the former French youth international is by no means a regular first team player, the 25-year-old has started to show some of the promise he developed at such an early age.

In 2009, Meghni expressed a desire to play for the country of his father’s birth, Algeria. On August of the same year his wish was granted as he made his debut in a 1-0 friendly win over Uruguay and has yet to be omitted from a squad ever since.

Often described as an intelligent player with impressive technical ability, Meghni may well have to produce the best performances of his career if Algeria are to overcome England, USA and Slovenia in Group C of the World Cup.

With such a catalogue of international stars at Argentina’s disposal it’s not easy to pick out a name that many of you won’t be familiar with. However, 22-year-old Angel Di Maria is a someone that not every football fan may yet be aware of. 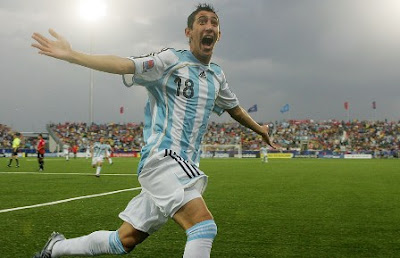 The Benfica starlet is renowned for his dribbling ability, sweet left foot and outrageous skill. The winger first came to prominance during the Fifa Under-20 World Cup, scoring three goals and dazzling spectators with his exciting performances. Portuguese side Benfica soon moved in and club president Luis Vieira claimed that Di Maria would be the perfect replacement for the outgoing Simao Sambrosa after completing his move from Rosario Central.

In 2008 Di Maria claimed an Olympic gold medal with Argentina in Beijing – scoring an extra time winner against Netherlands in the quarter finals. National coach Diego Maradona was clearly impressed by the shy midfielder and has heaped praise on the youngster.

“Angel has the quality to be a worldwide superstar within the next two years. I have always followed his career closely and his level has increased enormously since he’s been in Europe.”

Di Maria, who possess a somehwat skinny frame, could well be chomping at the bit for a place on the left-hand side of Maradona’s Argentina XI at the World Cup if he continues the impressive form he has shown at Benfica this season. His performances have also come to the attention of Europe’s top clubs with Manchester United and Chelsea reportedly interested. If given his chance in South Africa, Di Maria could add value to his already growing price tag.