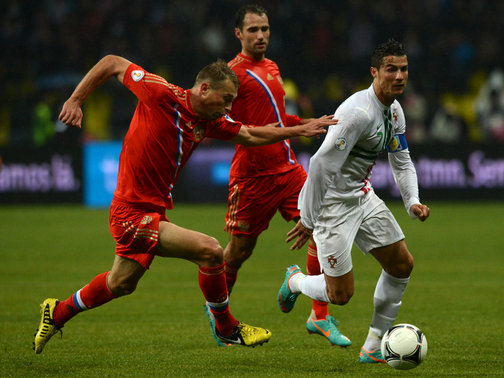 In UEFA zone World Cup qualifying, there are still four automatic berths in Brazil to be decided as well as seven runners-up/play-off spots.

Belgium, Germany, Italy, the Netherlands and Switzerland have all already won their groups and are thus assured of a place at the World Cup next June.

Here are the permutations for the final day from each of Europe’s nine groups:

Belgium‘s win in Croatia on Friday means that Les Diables Rouges will play at the World Cup for the first time since 2002. Croatia will finish second but to make absolutely sure of having a good enough record to qualify for a play-off spot they will need to avoid defeat in Scotland.

Italy qualified as group winners with two games to spare. Four sides can still come second though. Bulgaria, who have the best goal difference, and Denmark are on 13 points, with the Czech Republic and Armenia on 12. Bulgaria welcome the Czechs on Tuesday, Denmark play Malta and Armenia visit Italy. The runner-up from this group is likely to be the side that misses out on a play-off berth as this is the group with the worst record of second placed sides across Europe.

Everything bar the minor placings have been decided in Group C. Germany assured themselves of qualification thanks to a commanding 3-0 win over the Republic of Ireland on Friday night while Sweden beat Austria 2-1 to secure a place in the play-offs.

The Netherlands were the first European nation – along with Italy – to ensure their qualification, which the Oranje achieved two games ago. The battle for second place is tight and is between three sides; Turkey and Romania are level on 16 points from their nine games while Hungary are two points adrift in fourth. Turkey are at home to the Netherlands while Romania, four behind in goal difference terms, entertain Estonia and Hungary host Andorra, who they are likely to beat but will still need other results to go in their favour.

Switzerland won the group on Friday night thanks to a 2-1 win in Albania. That leaves the second place a two way tussle between Iceland and Slovenia with the Scandinavians enjoying a one point advantage. With Norway and Albania out of the running, Iceland know a win in Norway would clinch a play-off while Slovenia, who boast a superior goal difference, visit Switzerland.

This group had been very close all along and Northern Ireland’s 1-0 win over Russia looked to have brought Fabio Capello’s side right back to the chasing pack but the Russians now have a three point lead over Portugal in second place and these two nations are the only two still in contention. Russia travel to Azerbaijan knowing a draw would send them to Brazil while a win for Portugal over Luxembourg is still likely to only be enough for a play-off place.

As they head to Lithuania aiming to seal a first-ever qualification, Bosnia and Herzegovina have a 17 goal goal-difference advantage over Greece with both nations having tallied 22 points thus far. Greece host hapless Liechtenstein and will almost certainly win meaning the Greeks will need a favour from Vilnius if they are to top the group and qualify automatically.

The four-way race was effectively reduced to two on Friday as England proved to be too good for Montenegro and Ukraine beat Poland. England are a point above Ukraine so will qualify by beating Poland at Wembley. Any slip from the Three Lions though and Ukraine would overtake them by winning in San Marino. Montenegro are all but mathematically out of the running.

Spain are three points ahead of second placed France so the world champions only need to draw at home to Georgia to seal qualification. France host Finland knowing that even if Spain do not lose, a play-off place is the worst they themselves are assured.