Cause when the going gets tough, the tough gets going

When the going gets rough

The tough get rough. 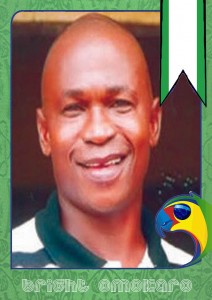 Nigerian football, especially in the 1960’s and 1970’s, was perhaps no place for shrinking violets. There was a need to be physically and mentally tough in a league that might have made Norman Hunter blanch. Nigeria has a history of producing hard defenders such Taribo West, Sunday Eboigbe, Emeka ‘The Bulldozer’ Ezeugo and Nicholas ‘Thunder’ Ukadike.

One of the toughest was Bright Omokaro, who with Sunday Eboibge were known as ‘The Destroyers’.

Born Bright Edobor Omokaro in 1961 he is known by nearly all [including his family] as   10-10. He grew up in the Cook Road area of Benin City, playing football on the streets. He had a successful youth career with Bendel State [as a midfielder] before moving to New Era College, recognized for producing talented young players. In 1978 Omokara was invited to join the Nigerian junior team ‘The Flying Eagles’ followed in 1980 by an invitation to train with the senior team. It was during this that Omokaro changed position to defender.

After starting his senior career at Bendel Insurance, ’10-10’ moved to New Nigerian Bank FC in 1982 and would be part of the team that won the WAFU Nations Cup in 1983 & 1984 and the league title in 1985. Omokaro would go on to play ASEC Mimosas in Abidjan, ACB Lagos, Flash Flamingoes FC, and Abiola Babes before finishing his career at Shooting Stars SC between 1993 and 1996 during which the team won the Nigerian Premier League [1995] and were runners-up in African Cup of Champions Club in 1996.

During his career, Omokaro represented Nigeria in two World Cup qualifying campaigns, the 1988 African Cup of Nations and the 1988 Seoul Olympics, however it was at the 1988 African Cup of Nations in Morocco that he gained his name. In the semi-final against Algeria with Nigeria reduced to 10 men, Coach Manfred Hoener asked Omokaro to go in hard on his tackles and reduce Algeria [who had already used their substitutes] to ten men. Omokaro duly obliged. The name ’10-10’ was born.

Omokaro may not have been the best footballer to play for the Green Eagles but he is arguably the archetypal defender of his times – physically as well as mentally strong and as hard as nails. 10-10 may just have been the hardest of them all.