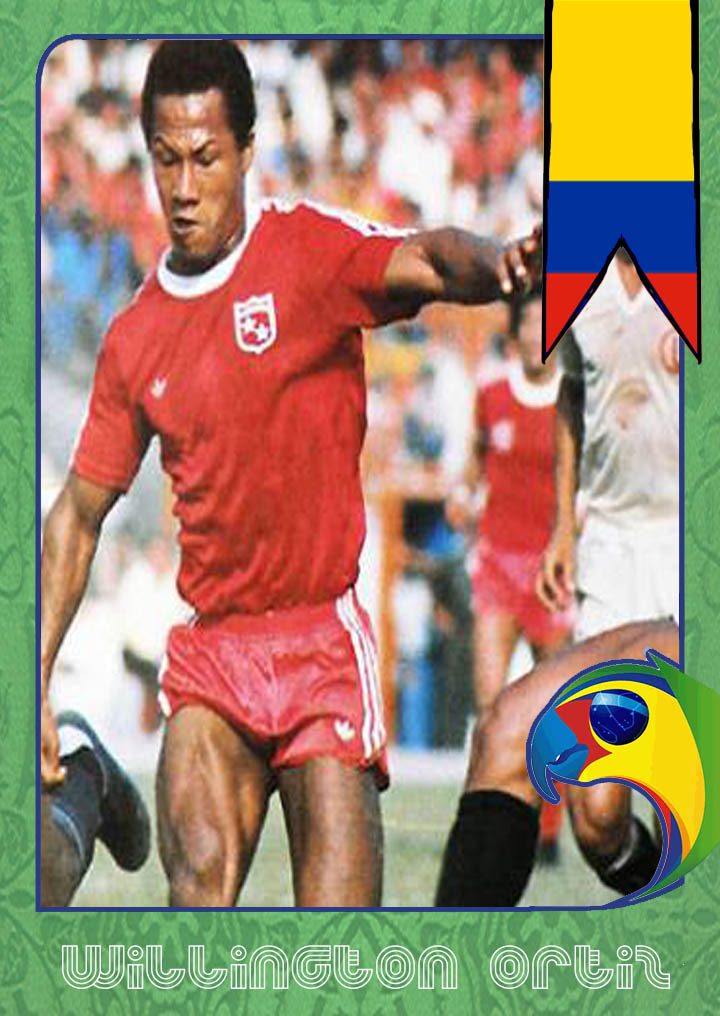 Di Stefano, Best, Schuster, Weah, Cantona, Brady, Ginola – just some of the great players never to have appeared at a World Cup. One name that should be included in the list is Willington Ortiz. Born Willington Ortiz Alfonso Palacio in 1952 in Tumaco, a port city near the Ecuadorian border “El Viejo Willie” would become recognized as one of, if not the best footballer in Colombian history.

Joining his local youth team, Ortiz’ skills were soon noticed and he left Tumaco for Atlético Girardot before joining the youth ranks of Millonarios in 1971. He made his senior debut in a friendly against Internacional de Porto Alegre – scoring the winning goal. Along with Alejandro Brand and Jaime Morón, Ortiz would form “la tripleta goleadora” that would propel Millonarios to the league title. In the process ‘Old Willy’ would earn a place in the 1972 Olympic team. This would be a prominent period for Los Embajadores. League runners-up in 1973 and 1975 before winning the title again in 1978; Copa Libertadores semi-finalists in 1973 and 74 as well as participating in the 1976 and 79 editions. Ortiz was instrumental to the team.

In 1973 Ortiz made his debut for the Colombian senior team and would make 49 appearances at national level over the next 12 years, getting to the final of the Copa América in 1975.

Skillful, fast and talented Ortiz was a target for big defenders, [Ortiz himself had praise for two Oscar Bolanos and Oscar Muñoz for their technical abilities]. It was another Antonio ‘Gringo’ Palacios with a horror tackle who was feared to have ended Ortiz’ career in 1979.

His return from injury was followed by a move to Deportivo Cali [rejecting offers from Barcelona and Valencia]. Whilst success was elusive for Los Azucareros, Ortiz continued to enthrall most markedly in an away leg of the 1981 Copa Libertadores to River Plate’s all-star cast. Ortiz dazzled, ending by scoring the winning goal.

In late 1982 Willington transferred across town to América de Cali and La Mechita [The Fuse] era began. In a fearsome partnership with Juan Mauel Battaglia, Ortiz won the league title in the next four seasons and were runners-up in the Copa Libertadores in 1985, 86 and 87.

Ortiz retired in 1988 with 215 goals in over 700 appearances. Ortiz had everything, strength, power and pace coupled with dribbling, feints, anticipation and vision. He leaves an indelible mark on Colombian football.