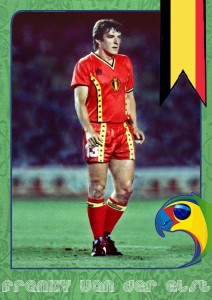 Defensive midfielders don’t tend to be ‘Flash Arrys’, aren’t necessarily meant to get noticed but just get on with the job in hand. They tend to be underrated and only appreciated when they’ve gone. Franky van der Elst bucked the trend. Most player of the year awards go to the top scorers, the playmakers, the players that have you out of your seats. Van der Elst won the Belgium Golden Shoe twice.

Born in Ninove, Belgium in April 1961, van der Elst’s youth career at Blau-Wit Lombeek was followed by a move at 17 years old to Racing White Daring Molenbeek [RWDM] in Brussels to begin his professional career. His debut came at the end of 1978-9 season when he replaced Johan Boskamp who the next season would be his coach. Under Boskamp, who appreciated the young player’s defensive attributes, van der Elst was able to establish himself over the next few seasons as the mainstay of the team in centre midfield. However, bigger clubs were noticing van der Elst and in the summer of 1984 he moved to Club Brugge.

Club Brugge were intent on revitalizing an aging team and van der Elst would join Jan Ceulemans and for a short spell Jean-Pierre Papin. It wasn’t long before van der Elst made his national team debut in a World Cup qualifier against Greece. In doing so he would be joining the golden generation at international level under Guy Thys which saw The Red Devils go to five major tournaments. In total van der Elst would make 86 appearances for Belgium up to 1998.

At club level, The Blauw-Zwart lifted the league title in 1988 and again in 1990 along with the Super Cup. Times were changing though; transfers and injuries saw players leave and Ceulemans retire with van der Elst replacing him as captain. Over the next eight years – all with van der Elst leading, the team would win three league titles, three Belgian Cups and five Super Cups.

Still with Club Brugge, 1999 saw his final year as a player. At the end of the season after 466 appearances for the Blauw-Zwart, van der Elst retired.

Strength in leadership and strong as a player [as you need to be to play the defensive midfield role], van der Elst patrolled the midfield, protecting his defence not just with his ability in the tackle [the sliding tackle his specialty] but with his positional sense and his command of the midfield which gave such a steady platform for his teammates such as Ceulemans and Enzo Scifo to go forward.