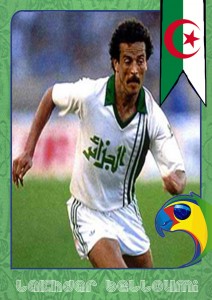 The Fennec Fox playmaker will perhaps forever be associated with one of the greatest World Cup shocks in history when Algeria downed the mighty West Germany 2-1, Belloumi scoring the winning goal.

Born on the 29th December 1958, in the Faubourg Faidherbe area of Mascara, the youngest son of Bachir if Belloumi. By the age of 12, Lakhdar was in the youth team of a local club Olympic Sempac. Coming up through the club ranks he moved to the junior team and by the age of 16 he had made his debut for the senior team in a 3-0 victory over El-Amria Oran.

However, he was still an amateur and to relieve the financial burden on his family, Belloumi moved to SCAF El Khemis, 150km away from home. A year later he returned signing for Ghali Club de Mascara. After one season, he moved to MC Oran in 1977. There would be a constant movement between these two clubs during Belloumi’s career.

Not yet 20 years old, 1978 would see Belloumi called into the Fennec Foxes squad for the first time by Rashid Mekhloufi and the 1978-9 season he would finish as top scorer in the league with 11 goals. His career was on the move when as part of his military service he moved to MC Alger between 1979-81. His time at the club was not particularly successful as he only appeared in around half the games possible. Internationally was a more qualified success. In March 1980, Algeria made the finals of the African Cup of Nations [losing to Nigeria] and reached the quarter finals of 1980 Olympics. Belloumi by now was an integral part of the team and in 1981 would be voted African Player of the Year.

The end of his military service signaled the end of his time at MC Alger and he returned to GC Mascara. He would stay five years during which he would win his first league title.

Revenge was taken by knocking Nigeria out of the 1982 World Cup qualification, and then came Spain and West Germany. As is well documented Algeria went home at the end of the first round following what is still known as the ‘Game of Shame’.

With the exception of a year at Al-Arabi SC [1988-9], Belloumi would see out his career switching between GC Mascara and MC Oran – where he would win a second league title before retiring in 1999. For Algeria there would be further appearances at the 1986 World Cup and the 1982, 1984 and 1986 African Cup of Nations.

A gifted, intelligent and skillful attacking playmaker, Belloumi is perhaps the greatest footballer to emerge not just from Algeria but Africa. Belloumi deserves recognition for more than just that one moment against West Germany, but that one moment arguably epitomized the promise that African football held.