Having had my last accumulator rudely scuppered by a rather dull 0-0 draw between the Ivory Coast and Portugal, the World Cup duly decided to rub it in by allowing the Swiss to beat the favourites Spain and simultaneously splash a further helping of egg on my face. 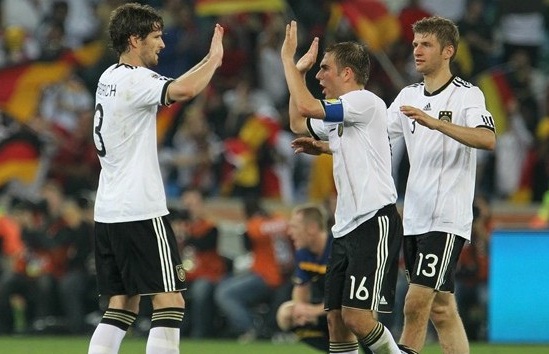 Despite this, I have come back for more and hopefully we can do a little better this time. Select the teams in CAPITALS to win.

Before the tournament had kicked off, this match looked difficult to predict. But, after the first round of matches, it appears to be a whole lot easier. During a largely uninspiring first six days of the World Cup, Germany were the only team to produce anything like compelling football with a 4-0 win over Australia. Serbia, on the other hand, struggled to find a rhythm and lost 1-0 to Ghana after conceding a late penalty.

Whilst Serbia are a team with the capacity to come back from a disappointing first match, the strength of the Germans, aided by their extra six months experience with the now infamous Jabulani ball, should be enough to seal a second victory.

Japan will have taken confidence from a valuable 1-0 victory over Cameroon in their first round match in group E. However, they will have to produce some performance to beat an experienced Holland side that have a number of world class players.

Holland secured a 2-0 win with a gritty opening performance against Denmark on Monday and are a team that is usually comfortable on the ball and creative in attack. With an abundance of midfield talent and more than capable finishers they should find a way to unlock what will be a resilient Japanese side.

Backing England to win is sometimes ill-advised and, in fact, actively discouraged. But it will take a monumental error, worse than that of Rob Green’s in their first match, for England to fail to beat Algeria who are ranked 22 places below them in the Fifa world rankings.

England quite simply have to win in order to have any chance of topping group C. And with the second round of matches already looking to be more open and producing more goals, Fabio Capello’s men should have no trouble in taking three points off Algeria on Friday.

Having had Tim Cahill sent off for a late tackle on Bastian Schweinsteiger during their 4-0 drumming against Germany, Australia will be without their midfield talisman and best player for this crucial clash in Rustenburg on Saturday.

With only a win good enough to keep them from crashing out at the group stage, the Socceroos will have their work cut out against a strong Ghanaian side who have the passion, energy and support to go some way in this competition.

Paraguay will have taken great confidence from their 1-1 draw with World Champions Italy on Monday. In a game that took place in very difficult conditions they looked strong in all areas, albeit against a rather lackluster Italian opposition. Paraguay were comfortable on the ball and their patience in attack, together with the return of striker Roque Santa Cruz should see them able to break down a resilient Slovakian defence over 90 minutes.

Italy began their World Cup defence with a disappointing performance against Paraguay in Cape Town. An injury sustained in that match by veteran goalkeeper Gianluigi Buffon will see him miss the match with New Zealand on Sunday, but this is unlikely to affect the result.

Italy are in a similar position to England in that they must win their two remaining games to have any chance of winning their group. Despite many believing Italy do not have the strength to retain the World Cup, they should overcome a New Zealand team ranked 78th in the world without too much trouble.

Every accumulator needs one result which is considered questionable. And in this accumulator, that result is this one. I am a big fan of backing African teams in this World Cup and in the Cameroon, I see a team with the potential to ruffle a few feathers.

Having put in a rather uninspiring performance against Japan on Monday, you could be forgiven for writing Cameroon off. But, their captain Samuel Eto’o played wide on the right and had limited affect on that game. If Eto’o plays down the middle, Cameroon have a real chance of penetrating the Danish defence and giving themselves a fighting chance of progressing to the last 16.