This year’s World Cup will not be remembered for tactical innovation, we can be sure of that. What was obvious is that the prevailing 4-2-3-1 wind continues to blow a gale, this time covering South Africa in a thick dusting of holding midfielders and players playing between the lines.

With 40% of teams deploying a clear 4-2-3-1 at some point during the tournament, the system really has managed to spread to all areas of the footballing globe. Added to this, a higher percentage of teams played a variation of a one-man striker system (even Sven gave up his playing a 4-4-2 for a 4-3-3) further illustrating the paradigm shift in world football.

In the 2006 World Cup, the most popular system was still the regimented 4-4-2 with eight teams using it as their primary system. In fact, only two teams, Portugal and Ivory Coast, used the 4-2-3-1 as their preferred formation throughout their World Cup campaign. Seemingly, within four years a coup d’état has taken place, removing the once popular 4-4-2 with a violent surge to a 4-2-3-1.

So why is the 4-2-3-1 popular now? Well, it offers the opportunity for teams to dominate the midfield area, getting extra numbers in midfield and subsequently are able to control possession. The importance of keeping possession is becoming more and more of a mainstream belief in management, and by playing one-striker up-front, it allows a team to do this. 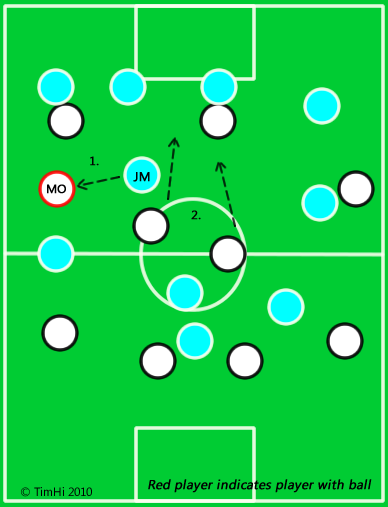 It also allows for players to play between the lines, floating around the midfield and defence, able to roam between full-backs and centre-backs – positions which make him hard to track in a 4-4-2 due to its rigidity.

What this leads to is the necessity for a holding midfield player, someone who can sit and close down the space available for that roaming attacking midfielder. The implication is that this holding midfielder is the second-striker, resulting in teams playing a 4-1-4-1 or a 4-2-3-1.

However, when playing only one holding midfielder as Argentina did, this midfielder can be moved around by the attacking midfielder, leaving acres of space for the opposition’s central midfield to push forward and find lots of space. This happened during Germany vs. Argentina, where Mascherano, in his tracking of the impressive Mesut Özil (1) was pushed to the flanks, allowing the opportunity for the German central midfielders to control the game and push forward (2). >>> 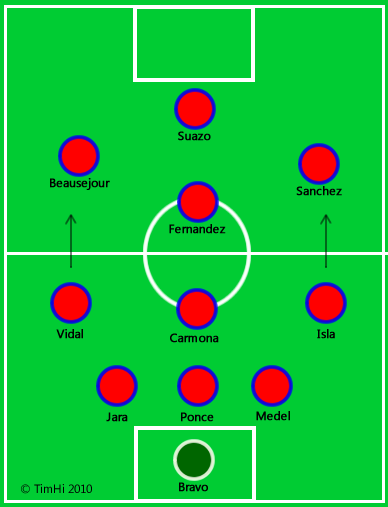 These trends led to there being little innovation at the 2010 World Cup, with only a few sprinklings of wing-back systems that usually spice things up a little. With the tournament being devoid of anything fresh, everyone’s eyes were firmly locked on Marcelo Bielsa’s Chile team, whose 3-3-1-3 system was anticipated with much gusto.

They did not disappoint, their hard-pressing and youthful energy impressed pundits and bloggers alike. “Finally, something different!” they said, then against Spain these words  quickly transformed to “Wow, they’re extremely aggressive aren’t they?” as Marco Estrada got sent off and ultimately sent the Chile side back home as they played a defensively- strong Brazil side in the second round, where they inevitably lost.

This was a shame, since they were causing Spain great problems in midfield, always looking to ‘hunt in packs’ without the ball, closing down in two’s and three’s, making life difficult for Spain to pass the ball around midfield as they like to do.

Bielsa’s system was a fresh breath of air, momentarily removing the stale heat produced by the prevalence of 4-2-3-1’s in the tournament. 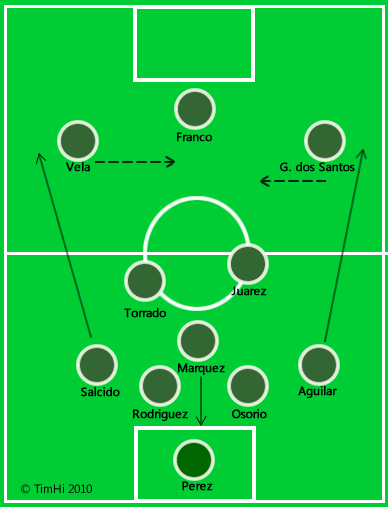 Another Latin American country offered viewers a different system, this time it was Mexico, whose fluid changes from a back-four to a back-three must have had viewers startled and confused, resulting in shock, “What, how can this be? How can you change from a flat-back four to a flat-back three at a blink of the eye? What is this? Some Latin American voodoo football?”

It’s not actually magic at all; just simple movement (something supporters of England this summer may not be aware of). With Rafael Márquez just playing in-front of the back-four, this allowed him to comfortably drop deep behind the centre-backs when they had the ball (a reverse libero perhaps?). This gave great defensive protection as well as having extra numbers in midfield. This was best illustrated against South Africa in the first match of the tournament, where the marauding runs of Aguilar and the impressive Carlos Salcido were fantastic to watch.

Their runs were complemented by the two wingers / attacking midfielders, Vela and dos Santos, who looked to both run between the midfield and defence and cutting inside. By starting out-wide and then cutting inside, it brought the South Africa full-backs in following them, making their defence very narrow. Subsequently this allowed Salcido and Aguilar to exploit the space in-front of them to great effect.

All in all, it was pretty dull but this was to be expected given the visible trends in football these days. This World Cup was very much about the 4-2-3-1, even Brazil’s lopsided system can be placed in the 4-2-3-1 ‘box’ – but there is (optimistically) hope on the horizon.

With Dunga leaving after this World Cup, surely the Brazilian footballing bodies would want a manager who empowers and sticks to the traditional Brazilian footballing traditions of flair and creativity in the next World Cup. Also, with Maradona having now just extended his contract to work the next World Cup, you never know what he could devise and put in place for Brazil 2014. They’ll all want to impose a footballing style and legacy that will trouble Spain’s recent successes, hopefully leading to tactical variations and originality that will hopefully breathe fresh air into tactical innovation in the future.