Goal of the Tournament

Player of the Tournament

There are a number of names that particularly stand out, David Villa, Diego Forlan, or perhaps Thomas Mueller – it  really comes down to personal preference, and who stood out for you. I’ve gone for Germany’s Bastian Schweinsteiger, who’s midfield performances particularly in the knock-out rounds were perhaps some of the best individual showings of the competition. The man who was once a very good wide player, has suddenly become one of the best centre midfield players in the world. You can vote for your own PotT here.

Young Player of the Tournament

Again, there were a number of capable candidates for this category. Staying with Germany, the likes of Thomas Mueller (20) and Mesut Oezil (21) were fantastic throughout the tournament. Ghana, the youngest squad in the tournament, had a couple of fine young players such as Kevin Prince Boateng (23), or Andre Ayew (2o). But my young player of the tournament comes in the form of Portuguese left back Fábio Coentrão (22) for his fantastic performances in the so called group of death, and against Spain where Portugal’s World Cup may have come to a premature end. It is also impressive that he was considered to start for Portugal, having spent the last two season’s in the Portuguese Liga away from Benfica on loan.

Team of the Tournament

In terms of sides who ended up in the final eight of the tournament, few stood out as a particularly exciting, unmissable team. The big names, Spain, Brazil, the Netherlands, all had their flaws, and weren’t playing the exciting or entertaining football they are renowned for. Instead, teams like Germany were the enjoyable team to watch, scoring sixteen goals in total. But my team of the tournament is Uruguay, for their great blend of tactical implementation and player quality. Diego Forlan might have been the best player in the group stage, as Uruguay stormed to the last sixteen stage unbeaten. From there players like Luis Suarez, Diego Perez, Edinson Cavani and Egidio Arevalo were all superb, not to mention the terrific backline that kept a perfect record up until the last sixteen.

Team of the Tournament (individual) 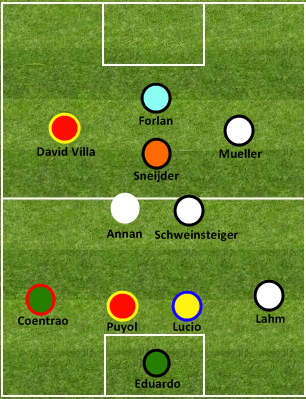 A lot of the decisions for my team of the tournament came down to personal preference. While the back four, maybe the back five were quite easy to narrow down, it got a little tricky when it came to the front six – you would like to fit the likes of Diego Forlan, David Villa, Miroslav Klose, Thomas Mueller, Mesut Oezil, Wesley Sneijder, Andres Iniesta and Xavi all into the one side, but it’s not possible. In goal I have chosen the Portuguese goalkeeper Eduardo, who conceded only one goal – which came in the 1-0 loss to Spain the final sixteen. He may have looked good behind a sturdy defence, but take nothing away from his ‘keeping stats, making the most saves in the tournament out of any goalkeeper who had reached the knockout rounds.

The back four was, for me, a rather easy choice. Lucio and Carlos Puyol were both terrific for their respective nations throughout the tournament, but special mentions to Gerald Pique of Spain, and New Zealand’s Ryan Nelson and Winston Reid. Full backs Fábio Coentrão and Philip Lahm were fantastic for Portugal and Germany. Honourable mentions to Carlos Salcido and Maicon in that department.

The front six, like I mentioned, were tough decisions, but I settled with a front three grouping of Diego Forlan, David Villa and Thomas Mueller, with Bastian Schweinsteiger and Ghana’s Anthony Annan in the central roles. Annan, for me, was particularly impressive in a very good Ghanaian side which went all the way to the quarter finals, and really should’ve gone one step further – although he didn’t come without competition from Sami Khedira, Diego Perez and Edigio Arevalo. The final position was a toss up between Xavi, Wesley Sneijder and Mesut Oezil, but the Dutchman was probably most influential for his team throughout the tournament.

Worst team of the Tournament

There were quite a few options for this award, but can you really look past France? Finished rock bottom of a group they really should have qualified out of, added to the squad turmoil that saw Nicolas Anelka be sent home, the captain and a coach have a row at training leading the whole team to boycott the session. The French government may now be involved to uncover what went all wrong, as Raymond Domenech is left without a job and some players having played their last few minutes of football for Les Bleus.

Match of the Tournament

There aren’t many matches that particularly stand out in this category. The group stage was notorious for low scoring, boring games while the knock-out stage wasn’t blessed with memorable clashes. Germany had a few entertaining games, their 4-0 victory over Australia was probably the first enjoyable game of the tournament. But our match of the competition is Uruguay 2-3 Holland in the semi-final, the game which also pulled our goal of the tournament. The five-goal game was very entertaining, considering what was at stake. An injury time goal from Maxi Pereira nearly got Uruguay back into the game, but the Dutch held out to reach the final.

Manager of the Tournament

Raymond Domenech. OK, terrible joke, but in this category a couple of managers stood out. Germany’s Joachim Low deserves credit for Germany’s third place position and their phenomenal tournament. Bert van Marwijk maay return to Holland a national hero for getting the Oranje into a World Cup final, the man is already a hugely popular manager in his home country. Uruguay coach Oscar Tabarez’s formation change in their second game against South Africa may have changed their tournament, while Marcelo Bielsa created an uorthodox and exciting Chile team which nearly everyone wanted to witness. Our manager of the tournament, however, is Spain’s Vicente Del Bosque. The right set-up, the courage to drop one of the best strikers in the world and lead his nation to a long awaited World Cup victory is some achievement. If talk that he wants to retire after the tournament is true, he can put his feet up and rest easy knowing he was the man who landed the elusive trophy Spain have wished for.

Moment of the World Cup

It aroused plenty of arguments and debate, but you have to admit it was one of the most memorable moments in recent World Cup history. I am of course talking about Suarez-gate at the end of extra-time in the quarter final clash between Uruguay and Ghana. Suarez cleared the ball of the line with his hands, denying Ghana a winning goal and a historic semi-final spot. Suarez was sent-off, and the penalty from Asamoah Gyan to send Ghana through was struck of the bar – after scoring two penalties already in the competition. You couldn’t write it. An unforgettable moment that will long live in the memory. Especially for the unfortunate penalty taker.

There were quite a few candidates for such an award. Some of the South American sides will be back even stronger next time around, Argentina for example, the squad should be pretty similar and the players will have plenty of experience gained. In terms of youth, Ghana and Chile will both be aiming for 2014 as another chance to take a few steps forward. Ghana had the youngest team in the competition this year, the experience gained will be hugely beneficial. Chile played some sensational attacking football, but the quality of youth in the side will be around in four years time. Mexico were unlucky against Argentina to crash out in the last sixteen stage, but have some fantastic young talent that could take them a long way in Brazil.