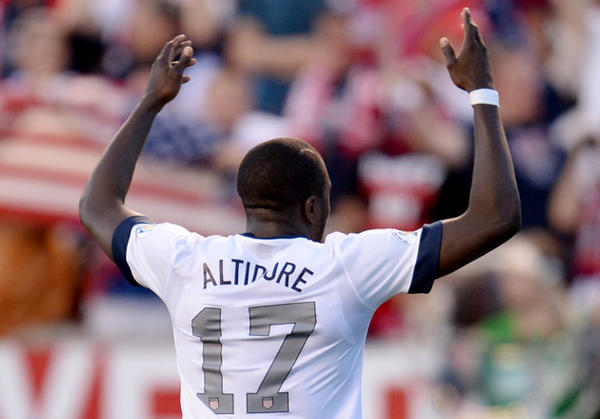 It is almost fifty years since England won their one and only international tournament. Bobby Moore lifting the Jules Rimet trophy following a 4-2 win over West Germany on home soil, the nation’s only trophy in the English FA’s cabinet.

That being said, the idea that their much mocked footballing cousins from over the Atlantic could win a World Cup before them isn’t one that is given much thought. But, if this World Cup has taught us anything, it’s that football is wildly unpredictable.

No-one saw Spain’s total collapse coming before the tournament. There could hardly have been one bet placed in Costa Rica on the team dismissing both Uruguay and Italy so easily and, for all the talking down beforehand, who in England saw them packing their bags before a full week had elapsed from their opening match? France now look to be Europe’s best hope of arresting a growing slide and countries from the CONCACAF, the laughing stock of football for so long, look to be in the ascendancy.

The actual beauty of the World Cup is how it ignites our childhood passion for football. Even the most jaded of us, the ones turned off by the dominance of oil rich clubs and the, anything but, Super Sunday matches, come alive again during these summers. But if us Europeans are the disgruntled, mid-life crisis adults reliving our youths, than across the Atlantic they are the toddlers taking their first glorious kicks of the ball.

For decades football, or soccer, has tried in vain to break through the dominance of made in America sports like baseball, American football and basketball. Pele and the New York Cosmos came up short, the North American Soccer League dissolving in 1985, and most attempts after that have floundered.That seems to have changed with the formation and growth of Major League Soccer (MLS).

It is just over twenty years since the the league was formed, a requiste to the successful 1994 USA World Cup hosting bid, but it is only the past ten years that it has really come into its own. With nineteen teams currently involved and two more, New York City FC and Orlando City SC, due to join next year, the league looks to be gaining in support across the country. David Villa has become the latest European star to cross the pond, following the likes of David Beckham, Thierry Henry and Robbie Keane, in joining the recently formed New York club for their inaugral season, and the attendance figures for the league have a growing average of around eighteen thousand. Nothing to match the sparkle of the Premier League yet, but it is a promising base with which the national side can work from.

With the league in a solid place, Jurgen Klinsmann, the current USA head coach, has been given a remit to work with the MLS and help change the face of American football. The results so far are encouraging, as the US have recorded famous victories over Italy, Germany and Mexico, qualified easily for the World Cup and won the 2013 Gold Cup. Even more encouraging from the side is how well their opening game win over Ghana was received back home.

Media outlets like the New York Post put them on their front page, whilst a highlights video of American fans, from Kentucky to California, celebrating John Brooks’ late winner went viral. Suddenly it seemed like the hard work of Klinsmann, the previous head coach, Bob Bradley, the United States Soccer Federation and the MLS had paid off. If that level of support even half continues than the future is bright for the national side. One thing we all know about Americans is that when they take to something they generally not only want to win at it but they want to become the best.

The main worry for them is in continuing an upward trend in results to keep the growing interest sustained. They may not win the World Cup in 2018 but they need to show that they are starting to move towards being contenders. The other worry is how long a soccer season is for kids in high school, as American sports usually come in short bursts. High school football lasts from August through December, and that’s only if your team makes the State Championship. High school baseball lasts an even shorter time, from February to April in most states. Soccer runs a ten month schedule in most countries and the danger is that American teenagers either won’t take to that or won’t want that type of commitment interfering with their main sports. MLS, and the national side, need to convince these athletes that soccer is a viable career option for them, otherwise they’ll be left picking up the scraps from the other sports.

In comparison to the USA, the hopes of the English national team supporters seem to be at an all time low. The 2010 World Cup was seen as a watershed moment. Struggling to get out of a group they were expected to dominate, one that included the US, they were humiliated by their old rivals Germany in the second round. The much vaunted Golden Generation of Beckham, Steven Gerrard, Rio Ferdinand and Michael Owen had come and, mostly, gone with nothing to show for it. The Premier League was blamed, Fabio Capello was ousted and the English FA went back to the drawing board with a new chairman in Greg Dyke. So far his main idea has been to introduce a fifth tier to the English football league and to allow the major clubs, like Manchester United, Arsenal and Liverpool, to field reserve sides in it. That idea has already been completely rejected by the league members and looks to be dead in the water.

There is hope, of course, with young players like Raheem Sterling, Ross Barkley and John Stones. They all have talent and promise and could all make it to the top of the game, but then England have never lacked talent. Gerrard, Beckham and the rest have all been to the very top of club football, it’s just in international form that they’re found lacking. The cause and solution to this problem is unclear, but it doesn’t look like the FA or the current England manager, Roy Hodgson, have the answers.

The worry for England is that they continue to drift in the same manner as they have done for forty plus years whilst the rest of the footballing world continues to pass them by. As galling as it sounds to traditional football supporters from England, if the MLS continues to grow, and Klinsmann’s plans take flight, than it won’t be long until their special friends from the States pass them by too.

One thought on “Will the USA win a World Cup before England?”