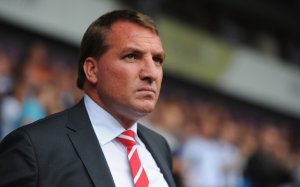 For Brendan Rodgers, there was a hint of a wry smile at the questions posed to him speaking after a rather routine win against an impotent West Ham at the weekend. As usual the Ulsterman chose his words carefully, deflecting the notions of a title challenge – yet at the same time acknowledging that the health of the club he took over nearly one and a half years ago has improved dramatically.

The aim for the club – he said – was to be part of the conversation. And with the club sitting joint 2nd coming into the festive period it’s  certainly true that the club is moving in a positive fashion since the stagnation under the previous managerial mis-steps.

Rodgers deserves praise for his role in the club’s resurgence, even though as Robbie Deighan pointed out on this website previously, the improvement between Rodgers and his predecessor, on paper at least, isn’t as definitive as some would have you believe. Though only the myopic would doubt that the Anfield club is responding well the methodology employed – sealed envelopes n’all.

One of the key tenents of Rodgers’ regime has been the notion that the club is in a period of slow progression, or as modern football speak would have it a ‘project in transition’. Rodgers carefully chosen words seem to be directed at both the fans and media; to perhaps dull the overeagerness of small portions of the former – still pining for the halcyon days of the 70s and 80s – and avoid the spotlight of the latter who would never pass up an opportunity crank up the hype.

For us it’s just about one game at a time

Liverpool’s Christmas fixtures could stand to define their season. This Sunday they travel to Spurs, a fixture the visitors have lost since 2008. Tottenham have misfired so far this season, yet Roberto Soldado’s exploits in the Europa League will give Andre Villas Boas cause for hope. Conversely Vertonghen’s omission from the Spurs defence because of injury could mean a day of hefty returns for Luis Suarez.

If Liverpool are to have a merry Christmas the Uruguayan will be key to their success; doubly so as they will be without Daniel Sturridge and now captain Steven Gerrard. The blow of the captain’s absence may be softened by the impressive form of Jordan Henderson – whose performances have led to talk of perhaps an inclusion in the England squad for next summer – but there is no doubt that the loss of such an influential player at a relatively important time of the season must provide Rodgers with food for thought in terms of his long-term vision for his team. Anyway, I digress.

The game versus Cardiff shouldn’t provide too many problems for the reds, whose home form has been exemplary. What will provide a more than substantial test of Rodgers’ squad will be the double-header of Manchester City away and then Chelsea at Anfield three days later. The Citizen’s home form has been as impressive as Liverpool’s and the squad size available to Manuel Pellegrini should allow for some rotation, enough at least to counter fatigue – a luxury that Rodgers’ does not have.

The game against Chelsea, with whom they share second spot, could be the most defining of the run of four games – an acid test as to whether Liverpool have the mettle to mix it with title challengers after a grueling run of games. Rodgers certainly has expressed confidence in his team, much as one would expect:

Yet the pertinent question to ask before this run of games is what would Rodgers really settle for behind closed doors? And if, hypothetically, Liverpool only come out of the four games with three or four points to show for them how will Rodgers react – if at all – in the January transfer window? The manager has expressed trepidation in splurging in January, pointing out that Liverpool won’t be buying “for the sake of it”.

The gut feeling is that Rodgers’ won’t be pushed by a bad run of results to panic buy. Liverpool’s management must know that their team is probably performing ahead of their own expectations and dropping back down to sixth or seventh at this point of the season wouldn’t be a total disaster. Liverpool have a very winnable set of games in January and only Arsenal at home should provide a real test the following month. The manager is probably mindful of the risks splurging in mid-season in pursuit of glory probably slightly ahead of their station at this point – a much more sensible policy would be to take stock at the end of the season.

One mitigating factor in how hard Liverpool push this year is the future of star player Luis Suarez. Each spectacular goal must fill Rodgers with both joy and worry – he knows that it’ll be a struggle to hold onto the 26-year-old, particularly if he impresses at the world cup. The deciding factor in whether he does stay in the North-west may well be whether Liverpool will be playing in the Champions League next season – qualification for which is probably the most competitive it has ever been in the Premier League. 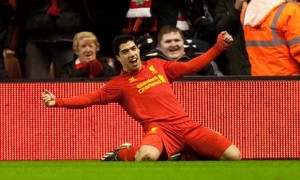 And so Rodgers is left with a rather delicate – and unenviable – juggling act to perform at Liverpool. The manager knows the benefits of a slow, organic progression a club should make and that the burden of premature expectation, particularly from fans, can easily lead to capitulation. In contrast the prospect of loosing such a unique talent could risk Liverpool’s progression stalling in itself; so does Rodgers go for broke on the promised land of midweek continental competition? Or does he ease off the accelerator and temper over-expectation?

It will be an interesting few weeks for all concerned, not least Brendan Rodgers who is finding himself in rather uncharted territory.