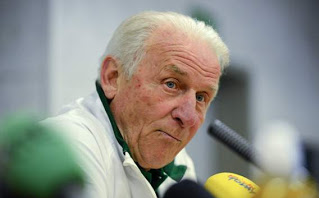 Following the belated arrival of Robbie Keane from the United States, as well as Glenn Whelan and David Forde’s return to training following Monday’s precautionary absence, all of the 23-man Republic of Ireland senior international football squad has now assembled at their training base in Malahide on the outskirts of north Dublin.

When asked about super star Swedish striker Zlatan Ibrahimovic, Trapattoni imparted a typical pearl of wisdom stating:  ”Zlatan is Zlatan.”  Yes, thanks for that nugget Trap.

Following the annus horribilis that was 2012, Trapattoni, who turned 74 on Saint Patrick’s Day, sought to emphasize the positives following a 2-0 friendly win over Poland at the Aviva Stadium last month when stating:  ”I have seen their (i.e. the Irish player’s) confidence this morning, and you just have to look at the game against Poland because the balance and the commitment and the technical ability that they showed, all of that makes me very, very confident.”

While beating Poland was a good result for Ireland, the result hid a lot of negatives.  Having been dominated for the majority of the game, with the Poles enjoying some 60% of the territory and possession, it was the visitor’s wastefulness in front of goal which cost them the game.  A goal in each half from Ciaran Clark and an excellent finish from Wes Hoolahan eventually earned the spoils for the home side when the visitors deserved at the very least a share of those spoils.  The result had little to do with the manager’s tactical acumen but of course, a similar scoreline in either game over the course of the next week would be more than welcome from all with Irish interests.

Two points or more from these next two crunch qualifiers will keep Irish hopes of a World Cup qualifying play-off berth alive.  Anything less than that and The Boys in Green will be out of qualification contention and left competing for the minor placings in the Group for the remainder of the campaign. Four points would be a more than satisfactory return and with the next clash after that an expected three points against the Faroese in June, Ireland would still be in with a good shout come September’s double header return against the Swedes and Austrians.  Six points over the course of this week would make the Irish firm favourites for that coveted play-off spot.  It would take a very brave – or foolish – man to bet on the latter outcome however.

Sweden are a much stronger proposition than the Poles.  Very unlucky to be eliminated from Euro 2012 by one point at the group stage, Erik Hamrén’s side have gotten off to a solid start to their World Cup qualification campaign.

In stark contrast to the Irish travails against Kazakhstan, the Swedes opened their campaign with a comfortable 2-0 win over the central Asian nation.

The Scandinavians followed that up with a 2-1 win over the Faroe Islands.  Again, the scoreline doesn’t reflect everything here.  Sweden enjoyed more than 80 per cent possession on the night and had 12 shots on target compared with one (the goal) for the home side.  The Irish of course also eventually overcame the Faroe Islands with something to spare with the result finishing 4-1 in Torshavn, following a tepid 0-0 score at the end of a poor opening 45 minutes in Europe’s fourth smallest international footballing capital.

There is then both nation’s performance against Germany.  The Germans are a fantastic young side and were it not for one of the best teams in the history of international football (Spain), Joachim Löw’s men would be arguably the best in Europe, if not the world.  The way Ireland miserably surrendered to Die Mannschaft at Lansdowne to suffer the worst home result (a 6-1 defeat) in the nation’s home competitive international footballing history was a performance which shone even this magnificent German side in a considerably brighter light than it deserved.

The result of this qualifying campaign meanwhile was Sweden’s 4-4 draw with Germany.  The Swedes, having trailed 4-0 after 55 minutes in Berlin to the Germans four days after Ireland had been hit for six proceeded to mount a remarkable comeback and eventually secured the most famous point of their footballing history.

The result set records on a number of fronts.  It was the first time that Germany had surrendered a four-goal deficit and only the second time in their history that Die Nationalelf has conceded four goals or more in a senior international as well as the first time that Sweden had recovered from a four goal deficit to avoid defeat.  Having gone 4-0 up, the Germans took their foot off the pedal.  An Ibrahimović inspired Sweden deserved immense credit for punishing the Germans to the maximum for their sleepiness at the wheel however.  Bear in mind also that before Ibrahimović scored Sweden’s first goal at the Olympiastadion (61 minutes), the Germans, just like at the same point of the game in Dublin barely four days earlier, were also four goals to the good.

Of course, just because Team A (Germany) hammers Team B (Republic of Ireland) at Team B’s home ground and Team C (Sweden) draws with Team A at Team A’s home ground in front of a partisan crowd, doesn’t necessarily mean that Team C will beat (or hammer) Team B at Team C’s home ground.

Sweden however are a side on the up and in their 6’5″ taekwando black-belt Ibrahimović, the northern Europeans possess a weapon which is potentially lethal.  Trapattoni has stated he will not man-mark him.  To this observer, that could prove to be a fatal mistake.  As his goal against England in November (see clip below) clearly illustrates, Ibrahimović is a man who can produce something out of literally absolutely nothing.  In defence of Trapattoni, the big question here is; with centre-half stalwart Richard Dunne missing through injury for this pivotal pair of qualifiers, who would man mark the man born in Malmö to Bosnian immigrant parents?  It’s a question which provides no obvious answers though Ibrahimović will of course need to be closely monitored if the Irish are to have any hope of securing a positive result.

The Swedes play at their brand new Friends Arena which also doubles as an ice hockey rink.  Temperatures are expected to hit -10⁰C by the time of the 8:30pm (local time) kick off on Friday night.  The Swedes have been asked whether they will close the retractable roof on the night, to which they have replied:  ”We will do whatever suits the Irish least.”  Whilst Irish players are familiar with playing in inclement conditions, they will not be familiar with playing at temperatures of ten below zero and a wind chill factor expected to make ground temperatures several degrees lower that that.

Having played three times already this calendar year (winning the two game King’s Cup in January and losing 3-2 to Lionel Messi’s Argentina last month), the Swedes will be considerably more familiar with each other than their opponents.  While The Boys in Green had a positive result last time out with the win over the Poles, one swallow does not make a summer.  Following what had been a truly dreadful dozen or so games, the swallows metaphor is particularly apt when applied to Ireland.

The likelihood is that the home side will have comfortably too much for their Irish visitors on Friday night, irrespective of whether the roof is closed or not.  That would leave Irish hopes of qualification for Brazil 2014 teetering on the brink with a win over Austria next Tuesday an absolute necessity to maintain any remote hope of even an outside chance of qualifying for a World Cup qualification play-off berth come the denouement of this campaign in the middle of October.