Kevin De Bruyne is unaccustomed to facing uncomfortable questions of his value to any given cause.

Whether he is turning out in the colours of Manchester City or the Belgium national football team, the classy midfielder has a tendency to catch the eye. The problem with setting such lofty standards is that any supposed dip is going to be dissected in minute detail. Elite performers are accustomed to operating under such microscopes, but silencing detractors can be a tricky business. 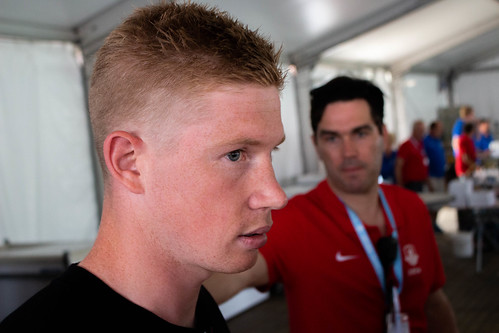 “catchlights” (CC BY 2.0) by lukasmoreels

Reputations take years to build but can be undone in a matter of weeks. That is not to say that De Bruyne is a spent force – far from it. He is the reigning PFA Player of the Year and has claimed that particular prize in each of the last two seasons.

An enviable collection of major honours has been accrued with City, and Pep Guardiola’s side are currently priced at 4/5 odds on the English Premier League outright betting markets to successfully defend a Premier League title in 2021/22. The Citizens are in the fortunate position of being able to rest and rotate without damaging their standing in the eyes of those handing out English Premier League tips, with their star-studded squad loaded with talent.

De Bruyne has, however, been one of the first names on the team sheet for over six years now and would be expected to lead by example as more trophy bids are pieced together on multiple fronts.

Will De Bruyne get back to his best?

City have no concerns when it comes to De Bruyne, with Guardiola eager to point that the Belgian will remain a prominent part of his plans regardless of whether an individual slump is hit. He has said of a talismanic part of his squad:

You cannot imagine how good he is. When you are playing millions of games, you have highs and lows. I know what he is doing. He knows he has our support always. I was a player and you cannot perform incredibly well all the time. There is no human being who can play in a creative way every three days. They cannot do it.

De Bruyne has been doing that ever since he returned to English football from Wolfsburg in the summer of 2015. No longer a Chelsea flop, his standing as a Premier League assist king was rapidly established.

He has also reached the 70-goal mark for City but found the target just three times – while providing one assist – through his opening 14 appearances in 2021/22. Injuries, it would appear, are starting to take their toll – De Bruyne’s battle-hardened body won’t bounce back like it once did. Careful coaching and game management is the way forward from here.

It would be unwise to write De Bruyne off, as class will always be permanent, but it remains to be seen whether he can get back to his awe-inspiring best.