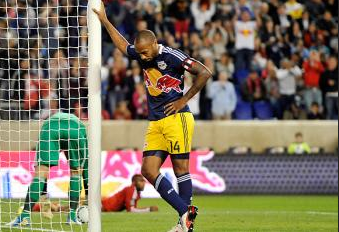 “It might be my last, it might not be my last All-Star game”, the words of Thierry Henry in the immediate aftermath of Wednesday night’s MLS All Star game against Bayern Munich.

The Frenchman, who turns 37 later this month, has so far given no indication about his plans after the 2014 campaign, though there is no doubt that he still has something to offer to Major League Soccer.

Henry was a starter for the All Star team that claimed a surprise 2-1 win over the German Champions in Portland, and he has been in fine form for the New York Red Bulls so far this season.

A new partnership with former Manchester City and Nottingham Forest striker Bradley Wright-Phillips has yielded a total of 23 goals so far, and the Red Bulls are the top scorers in the Eastern Conference (joint second overall).

However, they are a long way off the pace in 10th on the combined Supporters’ Shield ladder having finished top in 2013.

A year of mediocrity and minimal impact in the postseason would be a disappointing way for a legend of the game to bow out should Henry opt to hang up his boots come December.

“I’ve got a year left on my contract and I still feel good. So I’m going to enjoy it and we’ll see come the end of the year,” he said back in February.

“You know yourself when it’s the moment to go. When I get that feeling, I’ll stop, but that’s not yet the case. But when I do retire, I think I will stay connected to football in some way.

“I feel good in New York, but my life is in London. I have my daughter there, my house. I think my future is in that city.”

As recently as last month though, Red Bulls’ Global Director of Soccer Gerard Houllier stated that he believes this season will be Henry’s last as a player.

“I’ll have a talk with Thierry soon and of course I’ll know. I have an idea — I think he wants to retire,” Houllier told Big Apple Soccer.

“I think he wants to retire but we need to check with him.”

Whether that materializes or not remains to be seen but there can be no debate about how successful Henry has been in MLS and the additional attention he has brought to the league from abroad.

With 47 goals in 119 games, Henry has silenced the critics who questioned the decision to give him a multi-year deal to join MLS from Barcelona back in 2010.

“Thierry can be dangerous from everywhere and understands very quickly what he can take advantage from,” said Wenger.

“He was sharp today in the one against one and you could see why he was a great player because when he played in midfield his passing was excellent.

“He has vision as well and you could see that he can play everywhere.”

That vision has been has been vital to the Red Bulls this year, with Henry currently averaging an assist every two games.

An appearance for the All Star team was never really in doubt and, despite many supporters being against the concept; Henry believes it’s a great occasion to be part of.

“It’s good to see guys and be able to talk to them about their family, about where they’re from, about their culture, about whatever,” he said when speaking to reporters earlier this week.

“Not just, ‘You kick me, I kick you back.’ You have to battle, and that’s the way it is in the game, but it’s nice to be around and have fun also.”

It’s hard to imagine that there would be too many complaints from Red Bulls fans if Henry was to prolong his career for another year or two of fun.