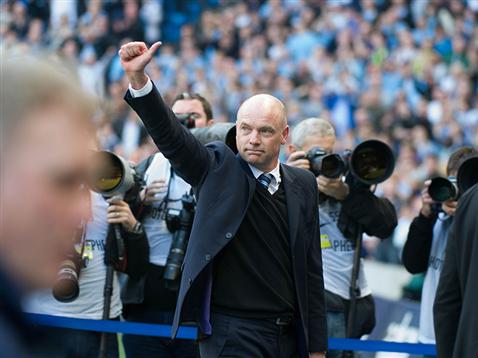 On the 2nd December 2013, with Wigan having lost four of their last five games and sitting 14th in the Championship, Owen Coyle was dismissed as manager after a mere six months in charge. Only five points separated them from 21st placed Millwall and the unbridled glory of their FA Cup triumph against Manchester City seemed decades ago.

However, under the guidance of the young and relatively inexperienced Uwe Rösler, they have now rather unbelievably booked their place once again at Wembley for a semi final showdown with the odds on favourites Arsenal and sit in seventh place, level on points with Brighton and just three points behind Nottingham Forest – with two games in hand on both of them.

This all comes without having a real recognised goalscorer in their team, with Manchester United loanee Nick Powell their current top scorer on ten goals and Marc Antoine Fortuné their only recognised striker to have amassed as many as five goals this season.

So, just what has been behind the Wigan revival? A team who – only three months from flirting with being dragged into the relegation dogfight – now look a good bet to return to the Premier League via the play offs and will go into an FA Cup semi final with Arsenal full of belief, having already won at the Etihad. A venue which right up until Jose Mourinho’s Chelsea visited had boasted a 100% record in the league, seeing off the likes of Arsenal, Liverpool, Tottenham and Manchester United.

The main factor in Wigan’s revival has been first and foremost their defence. They have kept seven clean sheets in fourteen league games under Uwe Rösler, having only kept five in eighteen games up to this point, a small but not insignificant improvement. In these fourteen games they have leaked an average of 0.7 goals per game having averaged over one conceded before Rösler’s ascension. Yet, it is these small margins that have made a real difference for Wigan.

According to the Squawka performance index, Wigan’s defensive score has been 107 per match since the takeover as opposed to 56 per match under Owen Coyle and their newfound defensive capabilities were showcased for all to see in their victory over Manchester City, where the defensive three of Ramis, Crainey and Boyce limited Manchester City to a speculative goal from 30 yards out and really not much else.

Sure, luck played a part as well and had Edin Dzeko had his shooting boots on then it might have been a slightly different story but looking at the statistics, City only managed to muster two shots at Scott Carson other than the goal itself, with five being blocked and five off target – hardly the signs of an onslaught with City breaking through the lines time and time again.

This result comes after a run of five successive  victories against opposition such as Nottingham Forest, Brighton and the Premier league outfit, Cardiff. Stark contrast to the miserable November and December endured during Owen Coyle’s final days.

However, a more disciplined and organised defence does not alone take you to the play offs in the Championship after being within five points of the relegation cohort. Another factor that is possibly at play is the unique training methods that Rösler favours, and has brought with him from Brentford to Wigan. He not only takes the lead on ‘several training sessions a week’ if he is to be believed,  but has a clear footballing philosophy and has set about revolutionising Wigan’s style of play.

According to a leading Wigan fan group: “He wants the team to play with quick transitions between attack and defence and a high line to close down space and press the opposition defence… with little interest in the teams’ passing the ball 540 times  strategy. ” Clearly then, there has been an overhaul from the perhaps ineffective and even dogmatic football that Wigan seemed to insist on playing during their final – slightly less glamorous – Premier league years into a more direct style with Rösler publicly stating on many an occasion that it was his ambition to have had an attempt on goal within three seconds of entering the opponent’s final third. Compare this with the speed of build up at Swansea or Arsenal at times, the teams that Wigan are often said to have tried to emulate, and the scale of this stylistic revolution becomes apparent.

Rösler now faces the task of motivating his side to an all important three points on Wednesday night against Sheffield Wednesday – likely to be a ‘back to earth’ event by anyone’s standards and must now come to terms with having to play two games a week, every week, without fail, between now and their semi final clash with Arsenal. This includes crucial games against not only  QPR and Leicester but also fellow play off hopefuls in Leeds, Watford and Ipswich all of whom are in with a shout of making the top six at the end of the season given a decent run of results.

The toughest test is yet to come for Wigan undoubtedly and Rösler may yet encounter the same problem that Phil Parkinson ran into at Bradford that surreal ‘cupsets’ are often followed by big league comedowns but Rösler’s down to earth mannerism, intense training methods and indeed, the fact that Wigan do have a lot of Premier league players still in their side make this a slightly less likely possibility.

One can only marvel at the scale of Wigan’s success in footballs oldest cup competition. For the Championship side on a shoestring budget to, for the second time in the space of a year knock out of the FA Cup one of the best sides in world football is absolutely remarkable, but this is not even the height of Rösler’s achievement. They now look set to go and enter the play offs and with so much Wembley experience in the last two years few would bet against them were they to reach the final. Put simply, so far he has worked little short of miracles at the DW. Perhaps the honeymoon period will eventually wear off .

The brutal nature of the Championship does often mean that the success of your season can flip on the back of a few bad results and clubs can go from dancing with the play offs to struggling for survival. Does anyone remember when Blackpool were top of the league after twelve games? Well they now sit 19th and six points off the relegation zone having played more games than all three of Charlton, Yeovil and Barnsley.

However, in all likelihood Wigan are more than safe. And maintaining current standards whilst even allowing for a slight dip would likely see them scrape into the play offs – an unbelievable position to be in given the state of affairs just three months ago.

If Rösler can indeed keep up this remarkable level of success as he has in this first three months at Wigan, he will surely find himself managing in the Premier League, be it with Wigan or otherwise.