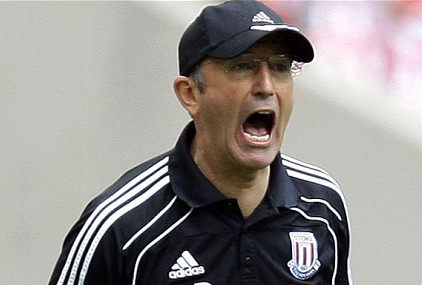 There comes a time in every man’s life when he must walk away. From a woman, from a job, from a friend, or foe, at some point everybody must choose to depart. For Stoke City manager Tony Pulis, that moment is surely close.

The Potters form has nosedived in the second-half of this season and Pulis has come in for considerable flak from supporters, who have become increasingly disappointed with their sides seeming inability to progress, both in terms of playing style and league position, over the past 12 to 18 months.

That Peter Crouch and Jon Walters both scored in the recent 2-0 win over QPR to all but secure Premier League football for another season is pretty much irrelevant. Likewise, that a win at home to Norwich on Saturday would cement their safety for a fifth successive season. As Batman proved in ‘The Dark Knight’, if you stick around long enough as a hero, you’ll only become a villain.

It would be doing a disservice to his entire second tenure at the Britannia Stadium, for that to happen to the 55-year-old. The Staffordshire club were nothing more than a middling Championship side on his return in 2006, replacing Johan Boskamp for a second spell as manager.

That Pulis led them to promotion two years later, and his since retained his record of having never been relegated, is nothing short of admirable. Throw in an FA Cup final appearance and a Europa League run, and it’s been borderline marvellous.

However, recent difficulties have led to supporters wanting a new direction for their club. When Pulis’ rudimentary style of play was yielding positive results fans didn’t mind it. Now that it isn’t, it’s another stick to beat him with.

And given how poor recent results have been, perhaps it is rightfully so.

A run of two wins in 15 league games isn’t good enough at any standard, nor is the dreadful return of 30 goals in 34 matches. Mix in Pulis disappointing record in the transfer market – Charlie Adam and Wilson Palacios to name just two who have signed for considerable fees and struggled – and the fact that only Chelsea, Manchester City and Liverpool have a higher net spend in the past five years, and Potters fans will argue they deserve more. Perhaps they do.

But that shouldn’t take away the excellent job that Tony Pulis has done in taking what was a run-of-the-mill second tier club and establishing them in the top-flight. Stoke City are without a shadow of a doubt in a far healthier position on the pitch now than they were pre-Pulis.

But the man himself would be doing his legacy more harm than good if he continued at the Britannia Stadium into 2013/14.