“This image says it all…. don’t go Lio “, tweeted Lionel Scaloni after Lionel Messi announced his retirement from international football in 2016. Scaloni himself had just hang up his boots and would soon go into coaching.

Little did he know how decisive a part he would play in gifting one of the most talented players of all time his first ever international trophy with Argentina. 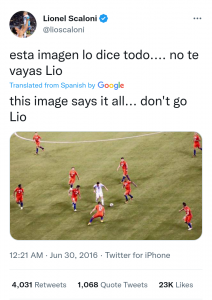 Lionel Messi had just lost his third final in a row with Argentina. Two Copa America finals and the 2014 world cup final. He was distraught. Clearly befuddled by the defeats, his pronouncement would not last and he was soon donning the blue and white of La Albiceleste.

He would come back, save his nation from the humiliation of not qualifying for the 2018 World Cup, get outclassed by a young French team in the knockout stage, lose another Semifinal in Copa America 2019 but eventually win the Copa America 2021 final at the Maracana. Much to his relief.

Can Lionel Messi go one step further at the grandest stage of them all? Can Messi finally deliver the World Cup to Argentinians and get Maradona-like status in his country?

In many ways this question has already been answered. Argentina had become a team solely reliant on the individual brilliance of Messi but they always fell short of glory. Maradona’s 2010 Argentina team had one plan and one plan only, give the ball to Messi. Messi as we can all remember dazzled us with his runs with the ball but they were never a ‘team’. The Germans humiliated them.

Alejandro Sabella would construct a much more solid Argentinian side in 2014. But even they fell short when it mattered most. The 2018 World Cup was more of a circus for Argentina.

So why exactly do I think Argentina will win the World Cup?

There is a feeling of unity and sense of purpose with this Argentinian side. They’re not just teammates they’re friends. And they are united by their universal love for their captain.

When he (Messi) becomes your captain you’d go to war for him.

We see this in every Argentina game when their captain is fouled, they run to defend him with De Paul leading the charge. They are approaching games with a do-or-die mentality.  The words leaving everything on the pitch have real meaning with this side.

The reaction when the final whistle goes against Brazil in the Copa Final perfectly sums up this Argentinian side and their love for their captain. As Didier Deschamps showed in 2018, team cohesion is key to any successful side in the World Cup and Argentina currently have that.

2. Support from the Arab world

The Qatar 2022 World Cup has been controversial in many ways. But from a footballing perspective, the location, like all World Cup hosts, will definitely have a big influence as to who wins the tournament.

Despite the lack of rich football history, Qatar, like many other Middle East nations, is a football mad nation. And central to this is Lionel Messi. The little Argentine is almost worshipped (in a football sense) in Qatar and I get the feeling that the home support will tilt towards Argentina.

The reception the Argentine team got when they landed in Qatar was also impressive. It’s unfamiliar territory for most teams and the more you feel at home the better.

Argentina have never lacked the talent, quite the opposite. They have always had a ridiculous amount of talent, especially going forward and this has not always been a blessing.

There was a lack of industry in the 2018 side, it was everyone working for themselves. The result was a disjointed team that had to depend on their captain to drag them through the group stage.

Lionel Scaloni identified this. The young coach sought to create a side that was not only solid but one that could get the best out of their attacking players without too much reliance on Messi. He emphasised on work rate, intensity and control of games.

The emergence of Emi Martinez cannot be emphasised enough. The Aston Villa keeper has transformed the Argentine back line from a feeble, shaky side to a more dependable unit. Argentina’s first really decent keeper since Romero. Nicholas Otamendi and Cuti Romero the bedrock of the defense.

The midfield trio of Leandro Paredes, Rodrigo De Paul and Giovani Lo Celso have been crucial to Scaloni. Locelso will be a big miss in Qatar and it remains to be seen who replaces him in midfield. Angel Di Maria, Messi and Lautaro Martinez the front three.

The good thing with Scaloni is that he has had time to experiment. The Argentine side heads to Qatar well familiar with what their coach expects of them.

The international stage has been dominated by European sides since Brazil last won the World Cup in 2002. Argentina know the pain of losing to European sides only too well. In fact, Argentina have been knocked out by European teams in each of the last four World Cups. Three of them against Germany and one against France.

The South American sides have had to sit and watch as their European counterparts dominated the biggest stage. Despite all their talent they could not cope with the level of investment that Europeans put into the game and the brand of modern football was far superior to Brazil and Argentina. Evidence of this could be seen in Germany’s 7-1 demolition of Brazil and France beating Argentina 4-3 in more recent Word Cup matches.

But as usual things tend to change and this World Cup comes around when many European sides are not at their best. Germany are a side in transition under Hansi Flick, while France, despite their wide array of talent, just lost two of their starting midfield and will also likely field an inexperienced backline. Belgium’s golden age is gone, Spain you feel don’t have the killer instinct in front of goal, England will fall short as they usually do, and the European champions Italy are not even in Qatar.

It’s the first time in a long while that the two dominant South American sides are going into a World Cup in top shape and certainly look a match for any European team. If La Finalissima is anything to go by, Brazil and Argentina have finally closed the gap on the European giants.

5. The man himself, Lionel Messi

There was once a time when it seemed Messi didn’t look forward to going for international duty with Argentina, that he reserved his best performances for Barcelona because he felt more loved there.

The Argentinian shirt felt heavy, the weight of expectation was too much. You could see it in his face, he felt overwhelmed at times.

It’s crazy how one title can change everything. The outpour of emotion when he won the Copa washed away all pressure Messi felt. He now looks at winning the World Cup not as an expectation but as an opportunity. And that I believe is the difference this time.

The team is finally structured to thrive off his strengths. He will likely not be the top scorer but he will be behind everything good that Argentina does.

This will likely be Leo’s last World Cup and I think it’s his best shot at winning it. Argentina head into the tournament unbeaten since 3 July 2019, a 35-match unbeaten run. This is hugely important in tournaments, as we saw with Italy in the Euros.