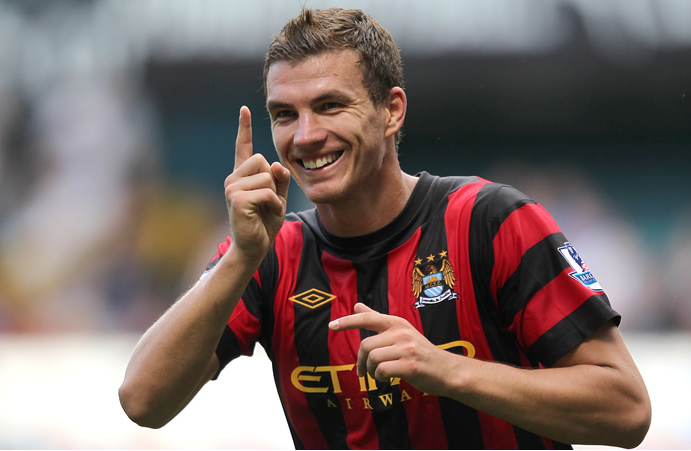 Prior to the start of the season, in a post on whether Edin Dzeko would be a ‘Man City slicker or a £27m flop,’ I concluded that if given a run in the side then Edin Dzeko would score goals and prove the doubters wrong. The reason for this, alongside the fact that he is a quality player, was that he took a season to bed in with former sides Teplice and Wolfsburg before showing his true potential.

Well, Edin Dezko has had his time to acclimatise with Man City and get used to the hefty price tag that he admitted had weighed on his mind. Although it’s still early days this season, through three games Man City are already enjoying the fruits from the garden of Edin.

Just as with Teplice and Wolfsburg, Edin Dzeko had a struggling start with Man City

When Edin Dzeko was transferred from his native Bosnia to Teplice in the Czech Republic, he struggled out the gate in his first season, with just 3 goals in 13 games. As Dzeko adjusted to the Czech league, the next campaign would see him net 13 goals in 30 games – a sign of things to come.

Wolfsburg then took him to Germany, where again he would have trouble in his first year, scoring just nine times in 33 games, but just as with Teplice, Dzeko’s second season would see him score 36 times in 42 matches, catching the eye of scouts all around Europe, including Manchester City.

Last season after his huge transfer, although there were glimpses of potential, Edin Dzeko looked like a player who was off the pace and out of sorts. Just two goals in fifteen premier league matches, and a further four goals in both the FA Cup and Europa League would see Dzeko finish with six goals in twenty-one matches – a goal every 219 minutes in all competitions – most definitely not the mark of a £27m man.

Just as before, Edin Dzeko is having a breakout second season

This season, Edin Dzeko has started with a bang. A goal in the Community Shield was followed by strikes against Swansea and Bolton; then came Sunday’s four strikes as Dzeko detonated Spurs. Suddenly the doubters have been silenced and the £27m price tag looks like money well spent.

Dzeko has scored an average of a goal every 67 minutes so far this season – every 43 minutes if you don’t include the Community Shield. What’s more, he has been lethal in front of the net. He’s taken just 14 shots, 10 of which were on target for his 6 goals. Although the new season is only three games old, the disparity between his last Premier League campaign and this one is dramatic:

Not only has Edin Dzeko been accurate this season, but he has also shown his versatility. He’s scored three goals with his right foot, two with the left and one with his head – demonstrating that he is a striker with the complete array of weapons.

Despite the goals, Dzeko’s passing has gone un-noticed

In addition to the goals, what may have gone un-noticed this season is that Dzeko has shown that he is also looking to become a provider. He only made seven key passes in Premier League games last season, this time around he already has 11 in just three games – only Frank Lampard with 12 key passes has more.

This is a good sign that he is not just looking to get on the end of everything but also create as well. Although he is yet to record an official assist in the Premier League, it’s only a matter of time before they start to flow like the goals.

What’s to come from Edin Dzeko?

If history has taught us anything, it’s to learn from the lessons of the past. For Edin Dzeko, that lesson is that after getting used to a change of scenery, he has been deadly. His initial season in Teplice saw him net just 3 goals in 13 games. The next year he would score 13 in 30 matches, attracting the attentions of Wolfsburg.

After Dzeko moved to Germany, the cycle would begin again. He would only score 9 times in 33 matches in his first season in the Bundesliga. The next year he would score 36 times in 42 matches, as his history of being a second year star repeated itself.

Although we’re only three games in to the new season, the same kind of turnaround for Man City would see him score in the region of 24 goals in the Premier League this campaign. With six strikes already, if he continues to get a run in the side over the wantaway Carlos Tevez, who’d bet against history repeating itself for a third time?