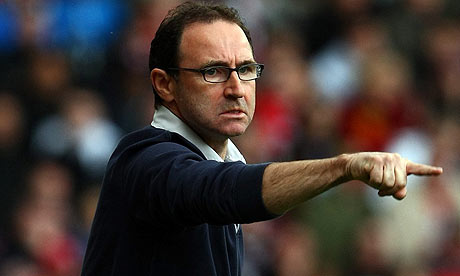 So Giovanni Trapattoni has finally stepped down as Republic of Ireland manager by “mutual consent” following five and a half years at the helm.

It’s a change which has come at least 11 months too late. Trapattoni achieved the nation’s first qualification for a major tournament in ten years by qualifying for Euro 2012. Ireland of course lost all three games in that tournament with a record which was the joint worst of any nation to qualify for the European Championships.

After that, the Irish started a difficult World Cup qualifying campaign with a scrambled and fluked 2-1 away win in Kazakhstan thanks to two goals in the last minute having trailed since before the half-time interval.

That was followed by a 6-1 hammering at the hands of Germany in Dublin last October. It was the joint worst Irish defeat in the nation’s competitive history, but what was even worse than that was the insipid nature of the Irish display. Calls for the manager’s head were beginning to become deafening, but he clung on to his job, with many suggesting that was largely because the beleaguered FAI couldn’t afford to pay off his – and his assistants Marco Tardelli and fitness trainer Fausto Rossi – bumper contracts.

So the Italian axis at the head of Irish football continued until tepid defeats at the hands of Sweden and Austria have now finally ensured that there will be no trip to Rio next June.

So who should be the next Republic of Ireland manager? Here I will discuss the leading candidates, their merits and foibles.

MARTIN O’NEILL is currently without a job and is odds on favourite with many bookmakers.

O’Neill is of course familiar with the British and Irish game, he was a massive success as a player, winning the European Cup twice, so players will respect him. O’Neill also of course has plenty of achievements as a manager and can achieve great things with limited players.

O’Neill also of course achieved much success as a club manager, leading Celtic to three Scottish League titles in five years in charge as well as the 2003 UEFA Cup final. At 61 years-old, O’Neill is also the perfect age to take up what is effectively a part-time role and he is also of course currently out of work, which would certainly be attractive to a cash strapped FAI given that they would not have to pay compensation to another footballing body.

O’Neill’s long-time assistant, John Robertson, has however recently had a heart attack, so it’s uncertain as to how willing he would be to get on board, and of course how willing O’Neill would be to take a job without his right hand man by his side.

MICK McCARTHY  has emerged as the second favourite for the role.

Mick of course feels he has unfinished business in the role having been hounded out of the job following the infamous “Saipan affair” back in 2002.

Mick is of course manager Ipswich Town at the moment however and he loves the day to day involvement of the club game. Mick would also be reluctant to resurrect all the Saipan stuff again, though he has plenty friends within the FAI, with Chief Executive John Delaney stating in the immediate aftermath of Trapattoni’s sacking that Ireland played “attractive football” under the last man to lead the nation to the World Cup back in 2002.

Mick is well liked and respected by Irish players, has a track record of achieving big things with limited players, is very familiar with the British and Irish game and style of football, speaks the language and would be welcomed back by most fans, so there are plenty of positives regarding the Barnsley native’s son of a Waterford father who led the nation to the World Cup finals as both captain and manager.

ROY KEANE is also being well backed by bookmakers.

Keane is currently out of a job which would of course make him something of a desirable option given that there would be no contract to be bought out.

Keane however does not have a particularly successful track record as a football manager. Yes, he achieved promotion to the Premier League with Sunderland in his first season in charge of the club, but that was having spent a record of close to £100million on player’s transfer fees before eventually jumping ship before he was sacked a season and a half later with the club on the brink of the Premier League relegation zone.

Following a disastrous time in charge of Ipswich Town, Keane left the club with the Suffolk outfit on the brink of the Championship relegation zone, so to say his would be a risky appointment would be something of an understatement.

Keane is of course also a somewhat temperamental character and has plenty of enemies within the FAI – including Chief Executive John Delaney. Employing Keane could also resurrect the whole mess that was the sorry Saipan affair, which surely nobody wants. I therefore believe that the odds on him becoming next Irish manager should be longer than the 16/1 on offer.

CHRIS HUGHTON would be a good choice as Republic of Ireland manager.

Hughton is an amiable character who won more than 50 caps for the nation and played at Euro ’88 – the nation’s first ever major tournament.

He became manager in his own right at Newcastle United and led the club to promotion to the Premier League in his first season in charge back in 2010, before bizarrely being sacked that Christmas with the club sitting mid table in the Premier League.

The first black man ever to play for the Republic of Ireland then took charge of Birmingham City. In the club’s first European campaign for 50 years, he led them into the group stages of the Europa League courtesy of a 3–0 aggregate win against Portuguese side Nacional.  During October, Birmingham won four and drew one of their League matches, an achievement for which Hughton was named Championship Manager of the Month. That season he led the club to fourth place and the Championship play-offs before going down 3-2 over the two legs of the semi-final against Blackpool.

At the end of the 2011–’12 season Birmingham gave Norwich City permission to talk to Hughton about their vacant managerial post, and he signed for the Canaries in June 2012 leading them to 11th place in the Premier League last season.

Hughton is very popular with players who have worked under him, he is a disciplined, methodical manager who plays a passing style of football.

His contract at Norwich (circa €500,000) could be difficult for the FAI to pay-off however and Hughton loves the day to day involvement which club management brings so he could therefore be a long shot to get the job.

BRIAN McDERMOTT was born in Slough to Irish parents and has always maintained that he regretted choosing to play for England at underage level. In an interview last year, McDermott revealed that he was a supporter of Sligo Rovers and that one of his goals was to manage the Republic of Ireland national side one day.

McDermott enjoyed a highly successful four year period in charge of Reading, winning promotion to the Premier League at the end of the 2011-’12 season.

In February this year, McDermott was named Premier League Manager of the Month for January after guiding his side to victories over WBA and Newcastle United as well as a hard-fought draw with then third place Chelsea.

In early March, despite his success in January, McDermott was sacked from his position after a run of four successive league defeats. Nigel Adkins took over but couldn’t prevent the Royals from avoiding Premier League relegation.

At the end of last season, McDermott took over as Leeds manager on a three-year contract, so paying out that deal could be a major stumbling block to FAI bosses should they be interested in McDermott’s services. It looks like McDermott will be waiting until later in his managerial career before taking over as Irish manager.

SEÁN O’DRISCOLL might be the way to go should the FAI want to consider a cheaper option.

O’Driscoll was announced as Bristol City manager on a 12 month rolling contract in January of this year, so there would be only a few months of a comparatively small contract to pay off.

Having managed Doncaster Rovers on a very tight budget and Nottingham Forest and with extensive experience in the Championship and League One, O’Driscoll is also familiar with managing lower league players – as many within the current Republic of Ireland set up now are.

O’Driscoll has also won three senior caps with the Republic of Ireland back in the 1980s and is familiar with football and football people in this part of the world. He could also be procured for about €400,000-€500,000 or less per annum, which would be a figure the FAI would like to see but he is unlikely to be a big enough name for bosses at Abbotstown.

BOB BRADLEY is a long shot. The former USA national team coach is currently in charge of the Egyptian national football team and faces a two-legged played off which would see the Pharaohs qualify for the World Cup should they win. Bradley’s contract would then be at an end after the World Cup so it could be perfect timing for FAI bosses.

Bradley of course enjoyed considerable success in his previous incarnation as USA boss, leading them to CONCACAF Gold Cup triumph back in 2007 as well as guiding the States to the knockout stages of the 2010 World Cup.

Bradley of course has an Irish connection, has enjoyed considerable international footballing success and could be procured for as little as €500,000 per annum, though he is not familiar with football on this side of the Atlantic which therefore makes him a long shot at best.

One thing that seems certain is that the FAI will take their time in making an appointment, though it will likely not take the 100 days taken to appoint Trapattoni. The Republic’s next competitive game is against Germany in Cologne on 11th October. With front line centre halves Richard Dunne and John O’Shea both suspended, it could be a chastening experience on the banks of the Rhine for the Boys in Green.

The Republic look almost certain to finish fourth in this qualifying group which will likely mean slipping to third seeds for the Euro 2016 qualifying draw in December, though 24 nations (almost half the nations involved) will qualify for that tournament in France.

So plenty food for thought for whoever the next Irish manager will be. One thing that seems certain is that the next few years will be a period of transition for Irish football and qualification for Euro 2016 – despite the 50% increase in qualifying nations – would be a phenomenal achievement for the new man in charge.