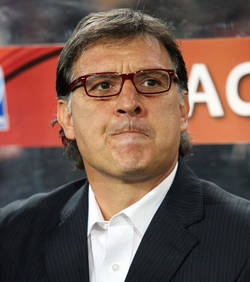 Barcelona have wasted no time in appointing a new manager following Tito Vilanova’s stepping aside as boss over the weekend due to a recent recurrence of parotid gland cancer.

The man who will replace Vilanova in the hot seat at Camp Nou is one Gerardo Martino (pictured left). The 50 year-old is not well known on this side of the Atlantic Ocean, but at the end of his first season in charge, he coached his hometown club Newell’s Old Boys to the Argentinian Clausura title. He previously won a single senior cap for Argentina back in 1991 and managed Paraguay at the last World Cup in South Africa.

Martino hails from Rosario, which is also the home town of Lionel Messi and Messi (who also played for Newell’s Old Boys as a youth) has hailed Martino as “a great coach”, one who is known for getting his teams playing well.

South American football experts have stated that “This (Martino) is a coach to keep Messi happy.”

Martino is a coach who is known for playing a number of different systems, but left to his own devices he would play a 4-3-3 with two wide men and a ‘false’ number nine, again, a system perfectly suited to one Lionel Messi.

Martino has very little experience in European football. He played 15 games with Tenerife more than 20 years ago. He’s never coached in Europe. The Spanish public have however seen Martino’s work at its best though because he got Paraguay to their first ever World Cup quarter-final back in 2010. There they gave Spain a very good run for their money before eventually succumbing to a goal from David Villa barely five minutes from time.

Martino is known for playing a high line, trying to catch teams offside and/or hitting them on the break. His time as Paraguay boss was slated as being quite boring in terms of the standard of entertainment while the 0-0 second round draw against Japan (which Paraguay eventually won on penalties) at the last World Cup was said to be one of the most boring of the 64 game tournament. Martino is renowned as being a student of Marcelo Bielsa who coached him at Newell’s Old Boys and also hails from Rosario.

Following Vilanova’s departure, Barcelona were clearly looking for a coach in a hurry and the main priority for the hierarchy at the club was who could get the best out of Lionel Messi and who could they get into the job in the shortest space of time with the La Liga season set to start in four week’s time. Having left Newell’s Old Boys at the end of last season, Martino clearly fits the bill on both counts.

The man nicknamed ‘Tata’ holds the record for games played for Newell’s Old Boys (505) as well as being voted as the best player in the club’s history by fans of the club.

Following his successful spell managing Paraguay (which also included the 2011 Copa America final), Martino returned to manage Newell’s Old Boys, where he led the club to the Argentinian top flight title in his first season in charge and a couple of weeks ago the club lost on penalties in the semi-finals of the Copa Libertadores.