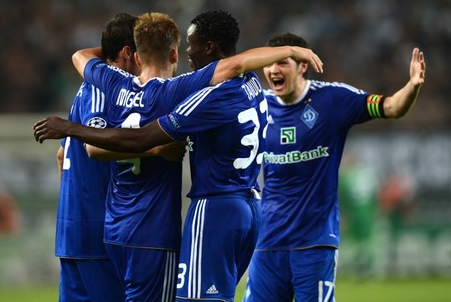 The domestic football league of the old USSR was a vast, vibrant, and powerful competition, containing as it did clubs such as the Moscow giants Dynamo, Spartak, CSKA – and occasionally Torpedo – as well as influential teams from the republics, like the Dynamos of Kiev, Tbilisi, and Minsk. Evidently, the league would have been exceptionally strong and closely contested – it was so strong, in fact, that it rose to second place in UEFA’s league rankings.

Playing in the league involved a lot of travel, but the standard was, clearly, very high – certainly higher than the standard seen in many of the newly-formed leagues we see today, although Russia and Ukraine do still maintain traditionally strong competitions.

The prime forces in the league were the aforementioned Moscow clubs, along with the Ukrainian powerhouse Dynamo Kiev and Dynamo Tbilisi of Georgia. For the most part, league-winning honours were dominated by Dynamo Kiev, Dynamo Moscow, and Spartak, who shared most of the titles. However, that is not to say that these teams had a total stranglehold on the championship crown; teams from outside the Moscow-Kiev axis frequently managed to break the hegemony, with Dynamo Tbilisi, Dynamo Minsk, Yerevan Ararat, Dnipro, and Zenit all winning the league during the Soviet era.

Other teams, like Neftchi Baku (Azerbaijan) and Zalgiris Vilnius (Lithuania), salvaged some pride for their respective republics; although neither of these clubs ever won the title – their best results were 3rd places – their lofty finishes and competitive performances provided a great pickup for those too used to Moscow/Kiev dominance. Kairat Almaty (Kazakhstan), Pakhtakor Tashkent (Uzbekistan), and Nistru Chisinau (Moldova) also participated regularly in the top tier, although none of these teams ever managed to finish in the significant placings in the division.

Yerevan Ararat took the trophy home in 1973, to historic and hysterical celebrations in the Armenian capital. Rivalry between clubs from the different Soviet nations could be intense, particularly when the Moscow teams visited the outlying republics. As shown in Simon Kuper’s excellent Football against the enemy, it is true to say that in a communist society, your football club became a community to which you had chosen to belong. Football allowed Soviet citizens choice – to select their own team – which, in this era, was a rare luxury. To be a fan was to be free, and to be at a football match was to be afforded the opportunity to express oneself. The logical progression of this was that the clubs of the republics became an outlet for nationalism, as made apparent by the case of Ararat, but also by the de facto national teams that were Dynamo Kiev, Dynamo Tbilisi, Zalgiris Vilnius et al.

The team from Yerevan was, effectively, the national team of Armenia. In the aftermath of the club’s league win in ’73, there was a ‘national festival,’ with the victory driving home and developing Armenian nationalism. Indeed, the separatist movement that occurred in that country was influenced by Ararat’s success, going so far as to borrow songs and chants from the club.

Ararat, however, have entirely failed to transfer their success to the post-Soviet era. Since the dissolution of the union, Ararat have won just one Armenian league title. They have been transformed from a team emblematic of their nation, to one emblematic of the rot that has set in to many of the former Soviet footballing greats. Only twice in the 2000s did they even manage to claim a runners-up spot, and they have been completely overtaken by Pyunik as the footballing flagship team of Armenia. Pyunik themselves were founded in 1992, and personify the new, capital-driven breed of post-communist clubs as much as Ararat personify the opposite. From the time of their establishment, they have taken 12 Armenian Premier League titles – a stark contrast to Ararat’s sole success in 1993.

The Ukrainian story of Dynamo Kiev, Shakhtar Donetsk and co. has been told elsewhere, and is not necessary to examine in any great detail here except to point out that Dynamo, having won nine in a row from 1993-2001, on top of winning more Soviet titles than anyone else (13), can lay claim to just one Ukrainian Premier League win in the last five seasons. Shakhtar, conversely, have won 4 of the last 5 in Ukraine, but don’t boast a single league crown, Ukrainian or Soviet, before 2002. For further reading on this topic, Jonathan Wilson’s Behind the curtain is highly recommended.

Dynamo Minsk (variously Spartak Minsk or Belarus Minsk) were the prime representatives of Belarus in the Soviet league. They proved to be relatively successful, consistently featuring in the top flight and snatching a title win in 1982, as a result of which they took part in the European Cup the following season. Upon the collapse of Communism, Dynamo went on to dominate the Belorussian top flight in the 1990s. They have since ceded their place to newer, more cash-rich clubs such as BATE Borisov. Indeed, Minsk have failed to win the league since 2004, with BATE comfortably ruling the roost in Belarus in recent times. BATE, as with many of the nouveaux riches of Eastern European football, are a symbol of how private sponsorship, an economic approach focused on the generation of capital, and the use of Champions League revenue has been used in the wider region to challenge the previously colossal strength of the republican powerhouses. Essentially, they have repeated the success of Pyunik in Armenia by replacing a former giant of their nation as the dominant force in their domestic league. They now rule mostly unopposed in Belarus.

Over in Georgia, Dynamo Tbilisi followed a pretty similar path to their cousins from Minsk. Taking their affiliation with the Soviet Internal Affairs office, Tbilisi were a powerful and successful club – ever present at the highest level of Soviet football – and took a rare Soviet continental victory by claiming the Cup Winners’ Cup in 1981. They also reached the semi-final of that competition in 1982. As with Dynamo Minsk, Tbilisi ruled the newly-formed Georgian domestic league in the 1990s, taking 10 championships on the bounce – no other team won the title in that decade. They have managed to keep up their winning ways to some degree; however, their last league trophy came in 2008, and they took just two other championships in the 2000s. When compared to their 10 titles in a row from ’90-’99, 3 wins in the subsequent 11 years does seem a touch paltry. Dynamo Tblisi has proven itself to be something of a production line for player-exports over the past 20 years or so – some examples of this include Kakha Kaladze, Georgi Kinkladze, Shota Arveladze, Giorgi Demetradze, and Temuri Ketsbaia – but its importance has dropped in recent times as a result of the relative unimportance of its domestic league, as well as the lack of state-backing to the extent they had received in the past.

Further to this point, many formerly important Soviet clubs have remained so within their respective ‘new’ leagues, but have not succeeded in maintaining their level of dominance – in terms of title victories – as the years have passed. This is especially true of clubs, such as the Dynamos, who were recipients and beneficiaries of significant state-backing during the Soviet era and in the immediate aftermath of the breakup of the union. Such backing has, for the most part, disappeared. Subsequently, these clubs have been unable to wield the same influence that they previously possessed – both in a political and sporting sense – resulting in increased player-movement, a levelling of the financial playing-field, and a drop in the amount of fans supporting these teams.

Clubs from the republics whose dominance is fading all tended to benefit from strong political guidance in the past – something that is now waning. In modern times, many of these clubs still revolve around the Soviet model of existence, thus suffering from inefficient organisation, as well as an inability to raise sufficient funds to compete with other more forward-thinking clubs who subscribe to the relative value of progressive private ownership. Newer clubs not so tied down to the old methods have come to prominence as a result. In essence, we’ve moved from an era of state-sponsorship to one of private sponsorship.

Another reason as to why the former giants are struggling is that they are now competing at the same level on the pyramid as their compatriot clubs. Whereas in the Soviet era, other Belorussian, Georgian, or Ukrainian teams often competed in lower division than their national rivals, the fact is that now the likes of BATE and Metallist Kharkiv are competing, year-in year-out, in the same tier as their previously more illustrious masters. Because of this, the aura of invincibility and unattainability has worn off when it comes to the old footballing behemoths of the Soviet republics. The quasi-spiritual importance of teams like Dynamo Kiev and Dynamo Tbilisi is fading alongside their ultra-dominance.

This situation is not unique to clubs of the ex-USSR. Many clubs from other parts of the Eastern Bloc that were once state-backed and state-promoted have been falling by the wayside in recent times, making way for sides less identifiable with the communist era, something that is notable in particular in Romania, Poland, Hungary, and, in a quite specific way, East Germany. That, however, is a pursuit best left for another day and to an article with a different title.

3 thoughts on “What’s happening to the Soviet republican giants?”