Finally, after over a year of speculation and rumours, Manchester United have got their man. Jadon Sancho has joined the Red Devils for a fee believed to be around £73m, with a potential £5m in add-ons.

Following an impressive four-year spell in Germany, a move back to England made a lot of sense for the 21-year-old. There was plenty of interest in the young Englishman but ultimately, a move to Old Trafford was the right one for the England international.

A front three of Marcus Rashford, Mason Greenwood and Sancho spearheading the attack for United over the next decade or so sounds very exciting. The introduction of Sancho on the right-hand side will give the team more balance in attack and allow Solskjaer to keep Rashford on the left, where he is at his best.

Sancho is an exceptional young talent who in a few years can become one of the world’s best players.

During his time in the Bundesliga, Sancho has shown his ability to create chances and goals every season he has been there. In the last four seasons, he has racked up an impressive 58 assists in the Black and Yellow of Dortmund.

Although it seems he will play predominantly off the right for Manchester United, Sancho can impact the game from anywhere in the final third. The graphic below shows the areas in which he attacks the box and the type of pass he tends to play in those areas. 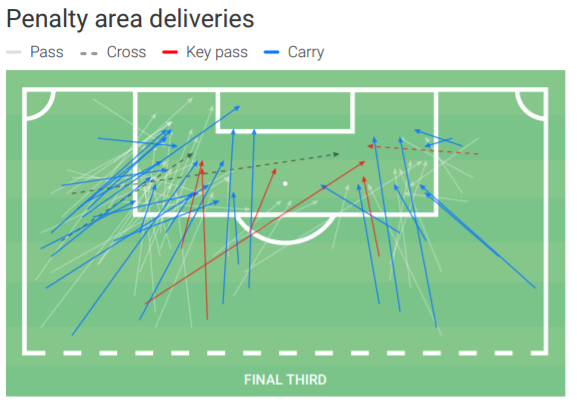 Most of Sancho’s assists and shot-creating actions are from either a cutback or a slipped through ball. Like most wide players these days, he rarely picks up the ball and delivers a hopeful cross. Everything he does around the opponent’s box is calm and calculated. Those cutbacks and through balls will suit the runs and movement of players such as Greenwood, Edinson Cavani and Bruno Fernandes perfectly.

Having watched back on his assists at Dortmund, the relationship he had built with Erling Haaland was a scary prospect. Haaland’s movement and powerful running made life easy for Sancho, especially on the counter. We know under Ole that United have looked at their best when countering teams with pace and power, and Sancho’s play-style will only take that to the next level.

Comparing the youngster to attacking players across Europe will show you just how good he has been. Averaging 5.33 shot-creating actions and 3.86 dribbles completed per 90, the former Dortmund man is in the top 4% across Europe’s top leagues. Remarkable output from a 21-year-old.

In the 2019-20 season, Sancho scored 17 goals in 32 league games, his best season to date. What’s most impressive was how clinical he proved he could be. A goal for every three shots taken with zero penalties.

Last season he only managed half of his tally from the previous year with eight league goals. However, that can be excused with all of the transfer drama of last Summer and the impact of Covid-19 on a youngster living away from home.

In the Premier League, the game is played at a much faster pace than the Bundesliga. However, with Sancho’s movement off the ball and calmness on it, I can see him having a similar impact to Heung-Min Son. Both players had a similar goal-scoring record in the Bundesliga, although Sancho was by far more creative in his time there.

Sancho’s movement off the ball, coupled with the passing ability of players like Bruno and Paul Pogba, could see the youngster turn into a goal machine for the Manchester side. The out-to-in runs that Sancho continuously makes will have Paul Pogba licking his lips. We have seen him excel on the international stage with players making those runs for him, and I expect his relationship with Sancho to bring goals.

The Premier League is full of goal-scoring wingers. Mo Salah, Sadio Mane, Raheem Sterling and Heung-Min Son have been lighting up the league for the past few seasons and Sancho will be aiming to follow suit.

Most important to Ole Gunnar Solskjaer is the balance that Jadon Sancho will bring to his team for this upcoming season. Rashford and Anthony Martial have struggled on the right side when asked to play there, and Greenwood, who has done well there, is more of a number nine than a wide player.

At times, under the Norwegian, United have struggled to break down teams with a low block. They can be predictable on the attack, with almost 50% of their attacks coming from the left. Teams know that Pogba, Fernandes, Rashford and Martial like to pick up spaces in that left channel, and Luke Shaw tends to join in with his overlapping runs.

With Sancho out on the right, it gives Manchester United another option. Previously teams would let the ball go to the right, knowing Aaron Wan-Bissaka won’t create much, but now it will change. It becomes a lot harder to defend for 90 minutes when a team can effectively utilise both wingers. We have seen Man City and Liverpool be successful in their title-winning seasons with a balanced and fluid front-three.

Sancho’s introduction will allow Greenwood a chance to lead the line at Old Trafford. Edinson Cavani impressed in his first season at the club but won’t be able to play every week and will be the perfect mentor for a young striker like Greenwood. The importance of this cannot be understated.

One of Jadon Sancho’s finest attributes is his attitude towards the game. He is a player with a lot of self-belief and, his confidence is admirable. The ambition to move abroad in search of first-team football at the age of 17 tells you all you need to know.

Rio Ferdinand, who is a long term admirer of the London native, said on his podcast FIVE that he heard a lot about Sancho as he came through the ranks at Watford and then at City.

“They’ve got Foden, they’ve got Sancho. Who’s better? Some are saying Foden, some are saying Sancho. Obviously, Pep comes to Man City and the difference is, from what I was told about him at this time, he’s expecting to play now. ‘I’m good enough, that confidence.”

“Also he’s got a good head on his shoulders, he loves football, wants to improve, listen and learn so if he just continues on that path the sky’s the limit for him really”

Sancho’s ability, combined with his confidence and ambition, proves to me that he will go right to the top. Still only 21-years-old, the sky truly is the limit. I, for one, am very excited to watch him grow as a player over the next few seasons at Manchester United, and I expect him to have plenty of winners medals by the end of it.

Drogheda United, Liverpool and Ireland supporter. I Completed a Sports Journalism course in DBS and write about the Premier League and International football for Back Page Football.