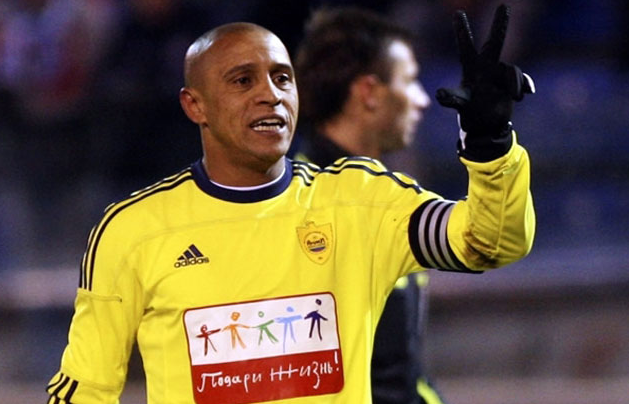 When Chernyshevsky had his famed novel published in 1863 little would he consider the title as appropriate for the current state of Russian football at all levels.  From the election of the new RFS (Russian FA) President, Tolstykh,  there were increased posturings by “fans” against the enforcement of rules by the ruling body, even some clubs (notable Zenit) made irresponsible gestures to the same authorities when their “fans” misbehaved.  Apart from the actual fireworks, there was the Roberto Carlos banana-gate (described in the following paragraph) and the roundly discussed statement by a “fan” group attached to the club.  For the 2nd city of Russia to step into the world football spotlight without winning anything or spending more of Russian natural resources on foreign players took some doing.

In March 2011 a Zenit fan was pictured handing a peeled banana to Anzhi’s Roberto Carlos.  After a search the offender was brought to book and his explanation – that he was about to eat the banana when he was caught up in a crush and pushed to the edge of the barrier and it only appeared that he was taunting the Brazilian with it.  In an irony lost on the bawling media (local and foreign), it was Roberto Carlos who grabbed international fame for his ability to hit banana free kicks around English walls, at least the “fan” didn’t try to explain his gesture as one of tribute to the Brazilian gent.  Later in the year on the banks of the Volga, Samara fans threw bananas at Roberto Carlos, this occurred right before the Dagestan side were to face FC Volga Ulyanovsk in the Russian Cup.

The local and foreign media wailed, gnashed teeth and rented lumps of scalp at the tragedy of racism in Russian football and how hideous the people were who went to football matches.  Even some respected Russian football journalists were caught up in this herd movement and bovinely moved to say how deep the problems ran in Russian society in general.  The national media suddenly cottoned on that there could be a story in a top flight side from the Caucasus playing a cup match in a small (population 700,000) provincial city against a 2nd Division (3rd tier) side and all the racism and hate that would result, it was sure to make great news!  What happened next was something that Chernyshevsky would have been proud of.

But before leaving Zenit there is the main story that warmed the cockles of the chattering classes and went so far as to have a Russian football expert (though that is stretched accolade for anyone let alone the learned Jonathan Wilson) shunt up on RTE’s “Morning Ireland” and Christopher Samba dreadfully misquoted after an ill-advised stitch up on BBC Radio 5 Live.  Both men were dragged out of bed to comment on the statement by the Landskrona “fan” club of Zenit that Zenit should produce more Russian players, give more Russian youngsters a chance and not sign players from outside of Europe, or players who are openly gay.  It is doubtful that the vast majority of reporters or talking heads who had lots to say actually read the statement in it’s entirety, if they did then they would come away with a far different take.  Like the Joe Duffy show where each successive call tries to outdo the previous one, or more appropriately the scene in Father Ted where Mrs. Doyle and her friend one up each other with tales of crime and horror, as the hours passed following the statement, the vitriol built to a giggling crescendo.

The bias against players who have “alternative sexual behaviour” would probably rule out most English Premier League players and more than a few European stars, though as with everything else, one angle will suffice to fill the silly season void before Sanata arrives.  That the BBC and English media were amongst the most exploitative of foreign outlets should come as no surprise.  The English remain extremely sore at losing out to Russia for 2018 and the current geopolitical “reset” between Russia and the USA has seen the UK caught in a limbo of doing business fully in Russia, the Russian way and lose out in the USA or trying to play the US way and lose profits.  Big business is making sure that the headline writers know what should be presented as newsworthy, the presentation corrupt and racist Russians and East Europeans is in vogue.  Yet little constructive advice has come from the country that invented, and continues to profit from, the hoolie culture that a large minority of Russian “fans” instinctively ape.

Which brings us back to what happened when Roberto met Lenin in Summer 2011.  Following a heart stopping penalty shootout win over 1st Division opponents, Volga knew they would host a former World Cup winner and genuine world star in the birthplace of Vladimir “Lenin” Ulyanov and Alexander Kerensky.  A committed left winger like Lenin wouldn’t have thought much of a Brazilian arriving for a football match in his hometown, doused as it is in memories of his family’s fall from grace following his brother’s execution for an attempt on the Tzar’s life.  Though a central player like Kerensky would have seen the chance for tolerance and culture to come to the fore, and it was with this attitude that the people of FC Volga and city of Ulyanovsk prepared for the match.  I was immensely proud of what the citizens of Ulyanovsk did – nothing!  They did nothing!  They were themselves, the city and region is heavily mixed in terms of nationality with Tatars, Chuvash, Mordvins, Asiatic peoples and other non-Russians, with sizeable numbers of non-European students and workers living locally.  People can walk the streets at any time day or night without fear and the prevailing local attitude is one of – Welcome to the homeland of Lenin!  It is a pure Russian emotion unlike the snobbishness or open fear in Moscow or St. Petes.  The initiative was simple – be ourselves, self-regulate and may your neighbour be your keeper.  So simple that it couldn’t seem to be true.

On behalf of the club I approached the English-language media (especially local) in Moscow offering inside views and full access to what was happening in the latest major day of FC Volga, however once they realised there was nothing to bleed with, they turned sour and ignored the situation.  I was told by the deputy editor of the oldest english-language paper in Moscow that unless I believed there would be a racist incident or anti-social behaviour, he couldn’t square it with his bosses to squeeze 2 lines into the next issue let alone send a journalist 900kms from the capital.  Nobody was interested in the fact that a non-European player (termed black by the media) would go to a formerly depressed area and play a football match.  What would there be to write about?  Football?  The Volga initiative was taken on board by the current RFS President, Tolstykh, and it is just one measure that can be taken.  However until the media buy in and allow football to flourish, and until “leading nations” come forward with constructive, sustained and locally tailored proposals for assistance, the fodder for tabloid media and “liberal” talking heads will continue to flow from the Russian game.