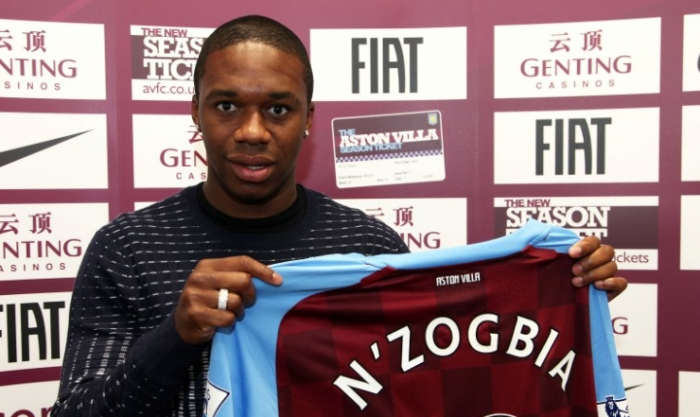 Charles N’Zogbia looked to be a great signing by Aston Villa after they lost Stewart Downing and Ashley Young in the summer. The French international had kept Wigan in the top flight last season and at £9.5 million, it appeared to be money well spent.

However, eleven games in to this Premier League season and N’Zogbia is failing to repeat his play from last year, finding himself on the bench on Monday night at White Hart Lane. So with just a single assist to his name for Aston Villa, just what has happened to Charles N’Zogbia?

Charles N’Zogbia enjoyed three seasons in the blue and white of Wigan, his best of which came last year when he scored 9 goals and assisted on 7 others. N’Zogbia had requested to be sold throughout the season, but this didn’t effect his form, as his attack minded play and eye for a shot at goal, helped the Latics to stay up on the last day.

His role at Wigan was primarily as a winger, who supported centre forward Hugo Rodallega. He was given licence to roam from the flank,  to come inside looking to shoot, which he did with regularity.

Since signing for Aston Villa, N’Zogbia is yet to hit his stride. He is still playing as a wide-man, but is now having to play more of a supporting role to Darren Bent and Gabriel Agbonlahor. Alex McLeish’s system is more defensive than that used by Roberto Martinez, and N’Zogbia now has to focus on winning the ball back as well as attacking.

If we break down his performances at Wigan last season and compare them against those for Aston Villa, we gain some valuable insight as to what has happened to N’Zogbia’s game.

Charles N’Zogbia going forward for Wigan last season had a very different look to the man who has featured in 11 Premier League games so far for Aston Villa. His offensive output has really tailed off in Alex McLeish’s system:

The three main things that jump out right away are the number of successful dribbles that N’Zogbia was making, the number of shots at goal he had, and the percentage that are hitting the target. These were three big keys to his success at Wigan.

This is also having a knock-on effect for his shots at goal. Last season with Wigan, he was taking a strike at the net every 52 minutes, whereas this season at Aston Villa he is taking a shot at goal every 69 minutes. A smaller drop off than his dribbling, but compounded even further when you see that he is hitting the target with just 9% of his shots, as opposed to 54% last season.

And the reason for N’Zogbia’s decline in his shooting percentage? He is shooting from further out, or just not at all, due to his deeper role at Villa.

If we take a look at two average position maps from a match for Wigan and one for Aston Villa, we can see how much deeper Charles N’Zogbia is playing:

For Wigan, N’Zogbia (10) was given license to roam and get forward. From the average position map above, we can see that he is playing in advance of Hugo Rodallega (20) and Tom Cleverley (15). Compare that to his last home match against Norwich City:

For Aston Villa, N’Zogbia (10) is playing a lot narrower this season, as he is tucked in behind Darren Bent (9) and Gabriel Agbonlahor (11), whilst also playing at a similar depth to Emile Heskey (18). With N’Zogbia being so narrow and deep, he is unable to get out and dribble at the opposing full back, which means his path to goal is more frequently blocked, causing him to shoot from further out.

If we also look at two heat maps of his passing we can see how his position has effected how he distributes the ball.

At Wigan (below), N’Zogbia’s freedom to roam can be seen, as he does virtually all of his work in the opposition half and his passing is more vertical in nature, probing around the box. This leads to more shooting opportunities and the creation of more assists through providing more key passes.

For Aston Villa (below), we can see his passing has a more horizontal in nature and done in deeper areas of the pitch:

His passing accuracy has remained exactly the same at 75% this season, so there is no drop off there, it’s the number of passes and the areas of the pitch that N’Zogbia is playing them in which has. He is now playing more defensive, square and backward passes at Aston Villa.

We’ve seen the effect of Alex McLeish’s system on Charles N’Zogbia going forward, but it has also seen him have defensive responsibilities too:

At Wigan, Charles N’Zogbia was involved in more 50-50 duels due to his attacking nature of playing high up the pitch, challenging opposition defenders from goal kicks and long balls out of defence. Where his game has changed this season is in ground tackling, where he is expected to do more to win the ball back in midfield.

So not only is he playing deeper and narrower than last season, he is also involved in making more physical challenges. He is making a difference on the defensive side, but not as big as the drop off in his offensive output from last season to this. So is it really worth shackling the offensive minded N’Zogbia?

What has happened to Charles N’Zogbia at Aston Villa?

Charles N’Zogbia arrived at Aston Villa as an attacking threat who could create and score goals. He had enjoyed the freedom to play high up the pitch and challenge defenders with his dribbling, then come inside in order to shoot or make key passes to generate goals whilst at Wigan.

Since his move to Aston Villa, he is now playing deeper and narrower in an attempt to support Gabriel Agbonlahor and Darren Bent. N’Zogbia’s opportunity to dribble at defenders has decreased, as has his shots at goal, passes to set them up, and overall effectiveness.

Alex McLeish has a more defensive minded system than Roberto Martinez, but if he wants to get the best out of N’Zogbia, then he needs to play him wider and encourage him to dribble more. That will stretch the opposition defence, providing more opportunities for the predatory movement of Darren Bent to profit from N’Zogbia’s probing runs and passing. Only then will the full potential of Charles N’Zogbia be realised.