It’s been two weeks since Arsenal were eliminated from the Europa League by Villarreal, at the hands of former manager Unai Emery.

It’s a bitter pill to swallow losing to the man they had sacked only 17 months ago. A real moment of revenge for the Spaniard and perhaps a sign of regression for the Arsenal side he left.

Their current manager Mikel Arteta has suffered a tough season in charge. Off the back of an impressive run after the return of football in June last year, which resulted in an FA Cup triumph, hopes were high heading into this season.

Finishing in 8th position as the season closed, it’s been a long, tough year with some good moments thrown in, most notably away wins at Old Trafford and Stamford Bridge. After a tough start to the season, the North London side struggled to find any consistency to climb the table. Arteta will have learnt a lot about himself and his squad during those tough times, and he will already be looking ahead to next season.

Lets take a look at where things have gone wrong, where Arteta can improve and if Arsenal can return to the top under current circumstances.

In the last number of years, one of Arsenal’s primary issues has been their dealings in the transfer market. Spanning over the tenure of three managers, some questionable decisions with incomings and outgoings have played a major role in the downfall of this side.

Firstly, their recent history with selling players has been awful. Letting players like Ramsey, Mesut Özil and Alexis Sanchez run down contracts – The latter going to rivals Manchester United. Similar to the sale of Robin Van Persie in the summer of 2012, Arsenal letting their best player leave to a rival club. The sale of Serge Gnabry for only £4.5 million another mistake. A failure to plan ahead and operate smartly by the board has resulted in the club missing out on big transfer fees and fall further away from those clubs they should consider rivals.

Their signings haven’t been much better. For years fans wanted the club to spend money to help challenge again and push on, just like they were promised after their move to the Emirates in 2006. Arsene Wenger had to put up with little backing in those years after the move, but ever since the signing of Özil in 2013, their spending has increased.

Spending big, however, doesn’t always guarantee success. Big money signings like Pepe, Xhaxa, Torreira and Mustafi haven’t helped push the team on and have all had some very rough patches in North London. There is still time for Pepe to come good, given his age, but so far he has been unable to nail himself down as a starter and consistently provide the quality he showed in France.

Ghanaian international Thomas Partey has struggled to have the impact expected of him following his summer move from Atletico Madrid. Some excellent performances early in the season showed what he could bring to this side. With some more smart signings to go alongside him, Arsenal have themselves a quality player.

The signings that have stood out, however, have been the free transfers from Chelsea. David Luiz in 2019 and Willian in 2020 said a lot about where this team are at currently. Willian, signing to a three-year deal on over £220,000 a week at 33 years-old. To the relief of some Arsenal supporters, it seems as though both will be leaving the club this summer.

This summer, the club need to implement a strategy in the transfer window. They could learn a lot from how Manchester City and Liverpool have gone about their business in recent years. Even Leicester have shown the success a good transfer structure brings. The Arsenal board have a lot to get right, and it needs to start now.

Arteta learning on the job

In his first full season, Arteta has struggled to build consistency within this squad. Plenty of changes in shape and personal has seen a constant yo-yo run of results. Injuries have been a factor but too many changes can hinder a team in building chemistry and understanding, especially when trying to bring new and younger players into the side.

Below show’s just how many players have played in each position. Quite alarming when you see just how often the team changes. Bakayo Saka, who has had a great season, is the one most often moved around. 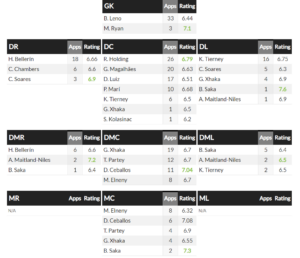 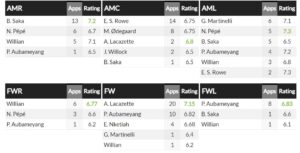 A struggle for Arteta this season has how often his team have found themselves a goal down. On 19 occasions this year, Arsenal have fallen behind, picking up only 12 points from losing positions with three wins and three draws. The issue isn’t so much the number of times they fall behind, it is more the lack of response you see from the team in these losing positions. Compared this to Manchester United who have trailed on 17 occasions but managed 31 points out of those games. It is certainly an area in which the Arsenal manager could improve. Maybe it’s motivational or, perhaps, it’s tactical but it definitely is a worry.

Going into next season, the former Man City assistant will know that consistency is key to success. Looking up at the team’s Arsenal should be competing with, you can usually predict the starting XI with the odd one or two changes. A strong core of the team has been difficult to find, but he will be hoping Thomas Partey and Gabriel can give that next season after a year under their belts.

Along with a consistent XI, Arteta will need to implement a consistent style of play and create an ethos at the club. Too often this Arsenal side cruise through games without any real ambition and conviction. The second leg against Villarreal being the prime example; the home game against Liverpool another. Arteta has an idea of where he wants this side to go and how they get there, but after such a torrid year, he needs to show some progression.

Since his move to North London in January 2018, Aubameyang has scored 85 goals for Arsenal. It’s one of the few signings in recent years that was worth every penny. He was named club captain in November of 2018 following Granit Xhaxa’s incident with the fans.

In September of last year, the Gabonese striker finally put pen to paper on a three-year deal worth roughly £250,000 a week. A lot of speculation about his future was put to rest.

Unfortunately for Arsenal fans, since then, Aubameyang has struggled to show his best form. Off the back of his solo quest to win the FA Cup last season, he hasn’t offered the same match-winning performances this season.

It has been his worst goal-scoring season so far at Arsenal. At times it has felt that without his goals, he doesn’t offer this team much. Players like Saka, Martinelli or Smith-Rowe bring a lot more energy and carry more of a threat. Rotating between the left-wing and up top could be the reasoning for this but as club captain, you expect a lot more.

His goals would have been crucial to any hopes Mikel Arteta had of a successful season. There aren’t many 20+ goals a season strikers around. As captain of the club, Arteta would have expected a lot more from the former Borussia Dortmund man. Although the manager has to take some criticism for how he has utilised the player, nobody except Aubameyang can be at fault for his terrible form.

Some off the field discipline issues occurred too. In the North London derby in March, the club captain was dropped to the bench as a result of these issues. Not exactly leading by example. Problems have always seemed to follow Aubameyang throughout his career and will continue to do so.

With such a drop off in performance this year and the fact he turns 32 next month, it is hard to see how he can bounce back to his best. Not favoured as a number nine by Arteta, and with plenty of young talent on the left-wing, Aubameyang’s time might be up. After such a huge contract extension, it may be hard to ship a player on those wages but, unless he can start next season on form, he should be worried about his place in this side.

It was a courageous move by the board to hire Pep Guardiola’s assistant without any head coach experience, but to sack him now would be to admit they have wasted the last 17 months. There is a lot more wrong at that club than just his inexperience. A new manager won’t fix the issues within the board and in the changing room. Not many in world football could deal with a football club run as poorly as Arsenal.

Looking ahead to next season, I think there is potential for Arsenal to climb the table. Though they are still a long way from the top four, a good transfer window signing some crucial additions to the starting XI (Centre-back, Central midfielder, Right back) and a good pre-season could see this Arsenal team improve massively. It may take a few years to revamp the squad, but they aren’t a million miles away. We have seen teams like Leicester and West Ham improve drastically in recent years with some diligent work behind the scenes and in the transfer market.

If the board decide to go their separate ways from Arteta then they need to go big on a proven manager. Another long term project with a young coach won’t sit well with the North London side’s fanbase. A change in manager would need to be someone who is guaranteed success. There are not many options in world football but a club with the stature of Arsenal is still a big job that will attract interest.

As we have seen with Thomas Partey, players will leave big clubs to join Arsenal, especially in today’s era where money is the driving factor. The same goes for managers. If Stan Kroenke is to stay at Arsenal, then he must do what he can to return that club to where it belongs.

Drogheda United, Liverpool and Ireland supporter. I Completed a Sports Journalism course in DBS and write about the Premier League and International football for Back Page Football.

One thought on “What has gone wrong at Arsenal and where can the club go from here?”