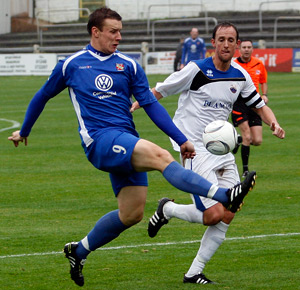 Bangor City welcomed mid-table Port Talbot Town to Fahrar Road on Saturday, and a large crowd was there to oversee what is likely to be Bangor’s last home meeting with Port Talbot before their move to their new stadium in January.

Craig Gardside put the home side into the lead after 14 minutes, Bangor continued to dominate the possession for the rest of the first half. The second half saw Mark Smyth double the Corbett Sports Premier League Champions’ lead in the 51st minute after a terrific effort from the Bangor midfield. Cortez Belle managed to grab one back for the visiting team ten minutes later. Belle’s goal sparked a late surge in pressure for Port Talbot, who looked close to equalising at several moments in the second half. Bangor City sealed the three points late in stoppage time when Les Davies hit home. Bangor now find themselves three places above Port Talbot in the standings, with The New Saints, Neath and Llanelli all above them.

Afan Lido welcomed Bala Town to the Marston’s Stadium in the day’s televised game, Afan Lido looked close to impressing the TV audience early on when an Andrew Hill effort narrowly went over the bar for a goal kick. Mark Connolly eventually broke the deadlock in the second half when his 51st minute free kick beat Chris Curtis in the Lido goal to send visitors Bala a goal up. Bala Town’s lead stuck and they emerged victorious, much to the disappointment of recently appointed (and ex-Neath) manger Andy Dyer.

Rhys Griffiths’ first minute wonder goal saw Llanelli go one up against visitors Aberystwyth at Stebonheath Park. The goal came from a marvellous Craig Moses run, Moses had beat the off-side trap before tricking a defender and turning on the inside to give the ball to Rhys Griffiths, who fired it home. The man of the hour Craig Moses doubled Llanelli’s lead just after the break when Moses beat Cann from a tight angle. Aberystwyth looked set to comeback after Chris Holloway was sent off in the 75th minute, sadly for the visitors, they couldn’t and the Reds did well to hang on to possession and ultimately seal the three points.

Carmarthen Town travelled to The New Saints on Saturday afternoon, and Matty Williams opened the scoring for the home team within the first ten minutes. Greg Draper got another one for the Saints just before the break, with Matty Williams making 3 – 0 ten minutes later. Christian Seargeant sealed TNS’ 4-0 triumph over lowly Carmarthen in the 69th minute, a comfortable three points for TNS, who stick to the top of the Corbett Sports Premier League with a two point cushion.

Sunday saw Newtown travel to nearby Airbus UK, both teams have been struggling as of late so both were keen to get a result from the game. Ryan Edwards took Airbus into the lead after thirty minutes, and Ian Sheridan doubled their lead ten minutes later. The second half saw an impression Newtown resurgence, Nick Rushton scored for the away team in the 66th minute, with Jamie Price scoring another four minutes later to equalise. Airbus managed to seal the win late-on when Ian Sheridan got his second of the game with five minutes to spare. A close game, but ultimately, Airbus deserved the points.

High-flyers Neath took on Prestatyn Town at home on Sunday, Chris Jones converted a penalty shortly into the second half to bring the home side into the lead. Former Port Talbot and Aberystwyth forward Luke Bowen doubled Neath’s lead a minute later. Ross Stephens hit home for Prestatyn in the 79th minute to keep the away side’s hopes alive, Jack Lewis sealed the win for Neath a minute later thanks to a wonderful assist from former-Bristol and Swansea striker Lee Trundle.

That’s it for this weekend’s action from the Corbett Sports Premier League, be sure to be back next time when some of the league’s biggest teams collide. Also, don’t forget to tune in to S4/C at 3.45pm on Saturday when Port Talbot welcome lowly Airbus. S4/C is available UK-wide on Virgin Media, Sky and on the S4/C website. Until then, hwyl fawr.