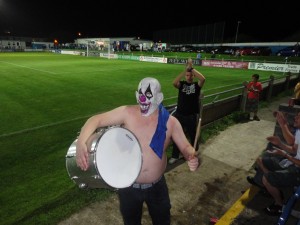 Matchday 8 in the Corbett Sports Premier League saw Port Talbot take the lead early in their home derby match with big spenders Neath on Friday night. Sacha Walters, who assisted by Lee John, scraped the ball past former-Port Talbot goalkeeper Lee Kendall after two minutes minutes, taking the home side into the lead. Twenty minutes later saw another former-Blue, Luke Bowen, equalize for the travelling Eagles after a huge blunder from Port Talbot Town’s Cortez Belle, who attempted to head back a Lee Trundle through-ball heading for Rogers but ultimately, failed. Just after the hour mark, Neath took the lead thanks to Paul Fowler, who controlled the ball outstandingly after receiving it from Neath captain and former-Swansea and Bristol striker Lee Trundle, and ultimately hit it into the back of the net. The match ended 2–1 to the away side Neath, sending home the rather healthy Neath away following home happy, but still leaving the Port Talbot Town faithful, as you can see in the picture, singing away proudly, knowing that the match could very well have favoured the home side on Friday night.

Carmarthen Town hosted Airbus UK on Saturday, Ryan Edwards took the away side into the lead after 16 minutes, only to see an Adam Worton own goal equalize for Carmarthen Town six minutes later, Nick Harrhy doubled the Carmarthen lead with ten minutes left in the first half. The game was over in the 45th minute after Airbus conceded a penalty to see Tim Hicks smash the ball into the back of the Airbus net. The second half saw a number of chances for Carmarthen, who could have won the game 5–1 after two stunning shots hit the woodwork. A comfortable win for Carmarthen, who are doing well so far in this season’s Corbett Sports Premier League campaign, Airbus however are looking a bit desperate.

A live TV audience saw Prestatyn Town entertain Llanelli AFC, who are flying off the back of a 2–0 win over Port Talbot Town and a 9–2 home win against Newtown AFC. The first half at Bastion Gardens saw a rather timid and generally lacklustre state of affairs, with Prestatyn Town just about getting the upper hand. The run of play very much stayed with Prestatyn at the start of the second half, with Neil Gibson’s shot for the North Walians almost causing ripples in the back of the Llanelli net but thanks to a wonderful display from Reds keeper, Ashley Morris, was prevented. Chris Venables nodded Llanelli into the lead with 19 minutes left on the clock after the ball rebounded off the post from a Craig Williams corner kick. Rhys Griffiths sealed the three points for the travelling side ten minutes later after knocking in the ball after another save from a Williams corner kick. Rhys almost went on to make it 3–0 in stoppage time at the end of the second half, but his effort hit the woodwork. A well-deserved result for the Welsh Cup holders, who are looking on top form at the moment.

The biggest crowd of the day saw Bangor City travel to fellow North Walians Bala Town in the weekend’s only Sunday game in the Corbett Sports Premier League. Bangor’s Les Davies took the away side into the lead after ten minutes, Lee Hunt replied on the break when he hit a perfectly-taken spot-kick to bring Bala level. Mark Smyth scored the final goal of the game with almost 20 minutes left on the clock, the final period of the game saw a decent amount of possession for the home side, who were very unlucky not to get an equalizer. Ultimately though, Bangor ran out winners, but the game could very well have ended differently.

Going back to Saturday now, The New Saints went a goal down after quarter of an hour to a travelling Aberystwyth Town side thanks to a marvellous goal from Wyn Thomas. The last few minutes of the first half and the first few of the second saw TNS go from a goal down to leading 3–1 at home thanks to goals from Alex Darlington, Craig Jones and Greg Draper. Lewis Codling pulled one back in the 64th minute for the trailing Aberystwyth side, but ultimately, Mid-Wales outfit couldn’t get back into it.

Newtown, who have being having a horrid time at late, welcomed newly-promoted Afan Lido to Latham Park on Saturday, and were looking to increase their points tally from a measly three after seven games. Nick Rushton hit home within the first ten minutes for the home side, with Afan Lido’s Andrew Hill hitting home a penalty in the 72nd. Shan Sutton dealed the deal in the 81st minute to grab Newtown AFC a valuable three points from what was largely a scrappy game.

Make sure to check back next week when the Welsh Premiership will be enjoying increased attendances thanks to the international break, meaning that football fans from miles around will flock to the Corbett Sports Premier League to grab their regular football fix. Until then, hwyl fawr.