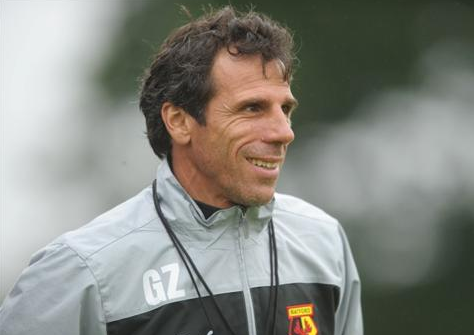 Gianfranco Zola’s project is coming together. Watford are a delight, ‘Barcelonaesque’ to describe it. Well timed, elegant and telepathic. They are the best watch in the Championship. Their third goal in the recent 4-0 win over Huddersfield pays homage to this. ‘Out passing’ Huddersfield, they scored the ‘perfect goal’.

It seemed bold in the summer from the Pozzo family when they instantly came in and gave Sean Dyche the boot. He had guided Watford to their best finish since 2007-08, but they felt the club needed change, like all new owners do. Under Dyche, Watford were ‘rough round the edges’, they would carve out lucky victories, nothing flash, just enough to keep them mid table. Now Watford are far from where they were last season, Zola came in with an aim of promotion. Bold and possibly easily dismissed at first, but after seeing the Watford side develop throughout the season. It is hard to argue that they aren’t one of the best footballing sides in the Championship.

The centre of this great success is the Czech international, Matej Vydra. His pace is devastating, shown in abundance in his second goal at Brighton in a 3-1 win. A clinical goal machine, it would be no surprise if big clubs are looking at the on-loan Udinese man. It can be said, Watford have had no one as clinical since the days of Marlon King.

Telepathic is a word that can come to mind when thinking of ‘Barcelona’ types, Matej Vydra’s on pitch relationship with Troy Deeney can be described as this. The forward’s play has been enhanced by the Czech international. Gianfranco Zola spoke of their relationship after Saturday’s 3-0 success over Nottingham Forest.

If you see their movements, they are always dropping into midfield to make it difficult for the opposition to find spaces. That makes a difference for the team.

That’s the key to a ball retaining side, every player needs to do a job on every part of the field. There is no room for rest.

One player that should take credit for Watford’s success is another loanee, Nathaniel Chalobah, 18 years old, his ability to read the game is phenomenal. He is an essential part in a Watford side that control games away from Vicarage Road. Cooling the edge off the game, keeping it on the ground. It is like watching Barcelona master a win away from home.

There is an element of ‘Championship’ to Watford. Fitz Hall and Nyron Nosworthy add the traditional centre back partnership of a Championship club. No nonsense, they are are effective when needing to shut games out. They are the key part of Watford’s three game winning run, in which they have conceded one goal.

The Championship promotion race is very open, Watford look as though they could be in the front running for automatic promotion. A battle between them and Leicester could be expected. Leicester have the most efficient strike force in the league with Chris Wood and David Nugent.

However, Watford are glorious to watch, a finished product with Vydra. Their style gives the Championship an exciting edge.

3 thoughts on “Watford – Barcelona of the Championship”