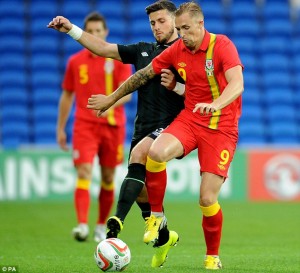 When it comes to the Republic of Ireland national team, they frequently engender a sense of despair. They have a tendency to be downright awful. Sometimes though, not often mind you, you walk away from watching a game with a sense of palpable hope for the future.

Wes Hoolahan’s long awaited second cap was a case in point in providing a communal glimmer of optimism. The away performance against Sweden earlier this year was another recent example, despite the absence of a winning goal to take away from Stockholm. There’s always something.

Last night, as the Republic of Ireland made their first appearance on Welsh soil in six years, a debut at the Cardiff City Stadium, there didn’t appear to be much to report. A 0-0 scoreline was a thoroughly representative summary of the game that a sparse, bordering on pathetic crowd, bothered to attend.

Still, everyone likes player ratings, right? The Irish support were widely seen to be in favour of Giovanni Trapattoni’s team selection upon it’s announcement on Tuesday? Let’s see if if the public’s team of choice lived up the billing.

Keiren Westwood: This wasn’t so much a chance to stake a claim for a place for Westwood, due to David Forde’s knee injury, he already looks certain to start next month’s World Cup qualifying double header. The Sunderland keeper, who is still unsure of his starting place at club level, struggled to command his penalty area throughout, struggling with some set pieces. A first half error almost led to Ashley Williams or John O’Shea almost bundling the ball into his net. Saved well from a Craig Bellamy free kick in the second half. 5/10

Seamus Coleman: Dealt well with the direct threat from winger Hal Robson-Kanu throughout, and showed neat touches going forward, his willingness to support the attack and move into the space vacated by Walters and Brady, evident. Coleman is virtually the first name on the teamsheet for Giovanni Trapattoni now. Growing stature in his manager’s eyes evident when he took the captain’s armband late on, albeit as a fourth captain on the night. 8/10

John O’Shea: Honestly, Big John didn’t have a whole pile to do tonight, but what he did do, he performed it admirably. Early on when Ireland did an impression of Spain at their most boring, O’Shea was part of a back four who elected to pass the ball between eachother in those triangles that everybody loves so much, rather than punt it forward. Lucky not to have deflected in the corner that Westwood failed to claim in the first half. Rested for the last 30 minutes. 6/10

Ciaran Clark: Trapattoni appears a fan of this O’Shea and Clark combination and don’t be surprised to see this duo team up once more in September. Like O’Shea, he wasn’t tested thoroughly in Cardiff last night, but he made some nice interceptions. Whether or not he can use his international emergence to further his claims at Aston Villa remains to be seen. paul Lmabert has signed several defenders this summer and with Nathan Baker also offering competition, Clark’s place in the green of Ireland may depend on his place in the claret and blue of Villa. 6/10

Marc Wilson: The Stoke City man had a very quiet game at left back, with virtually all of the Welsh attacks, in the first half at least, coming down their left. Jack Collison, unlike Robson-Kanu on the opposite flank, barely took his man on, giving Wilson a relatively comfortable evening. With Ireland lacking majorly in natural left back options, Wilson continues to solidify his place in the national side. Rarely spectacular, rarely ruffled. 6/10

Glenn Whelan: Winning his fiftieth cap, Whelan’s under rated and varied range of passing was in evidence early on as Ireland pinged the ball about. He appears the eternal symbol of Giovanni Trapattoni’s reign. Dragged a shot wide in the first period when he should have got it on target. Arguably, if Darron Gibson was available, it seems it would be his place that would be most threatened but Whelan offers more endeavour and subservient graft than the absent Derryman. The manager feels that is invaluable. Withdrawn on the hour. 7/10

James McCarthy: A belated fixture in the side, McCarthy began the game as the only non Premier League based player in the starting XI. This wasn’t McCarthy’s best performance in an Ireland shirt, but such was the slow pace of the game, it wasn’t a halcyon day for any. Went about his game with reasonable efficience but you can’t help feel that maybe McCarthy can contribute more in a more advanced role. Hoolahan’s presence means he didn’t get the chance last night. Gave the ball away cheaply at times. 6/10

Wes Hoolahan: Oh Wes, you’re not making it easy for us. He didn’t see much of the ball as, despite Ireland’s more pointed passing game, when the ball found it’s way to one of Walters, Brady or Coleman, they elected to cross for Shane Long rather than look to the Norwich City man. Getting caught dallying on the ball in the midfield, launching Welsh attacks won’t have endeared him to his often skeptical manager but worked his way into the box on occasion, going beyond the wingers and Long,  added a different dimension to the Irish attack. 6/10

Robbie Brady: If Brady lasted longer than 45 minutes, then maybe his rating would have been evened out by a lacklustre second half showing, but Trapattoni’s insistence to withdraw him, arguably Ireland’s biggest danger, at half time means he left a positive mark on the game. Two strikes at goal towards the end of the opening period defined Ireland’s period of dominance, the second a brilliant unsighted curling attempt that just flew wide of Boaz Myhill’s post. 7/10

Jon Walters: Ireland’s adaptation, with a new look team and partly, a new look style, didn’t mean that Jon Walters would be pushed to the periphery, as shown in Cardiff last night. Long balls forward, often punted by Westwood and not the defenders, were aimed at Walters, the Stoke City man drifting in from first the right, then the left with the hope of setting Shane Long away. Effective and was handed the captains armband in between Long and Coleman. 7/10

Shane Long: In this new formation, it’s Long and not Hoolahan who appears secure in keeping his place upon the inevitable return of Robbie Keane. He missed a couple of guilt edged chances tonight but did managed to beat Sam Ricketts several times in the air at set pieces, further suggesting he could perform the ‘big man’ role alongside Robbie Keane, a tandem the manager insists is still relevant at this level. Busy throughout, as always, but his finishing though needs work. Rested in the second half. 6/10

At the risk of losing you, here’s a quick review of the substitutes: