Pre-tournament favourites Spain need to get back on track against Honduras today, and Liam Stoker looks at the tactics of Vincent Del Bosque’s side. 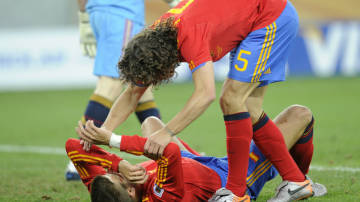 Spain, quite rightfully on the back of just one defeat in 48 international contests and a European Championship, enter South Africa hotly backed to end their World Cup drought. Casting aside any thoughts that they will stereotypically underperform and boasting a collection of fine attacking talent, Vicente Del Bosque favours a fluid, possession-keeping approach with a narrow 4-4-2 formation, with width provided from the full-backs and substitutes if necessary.

Coming from the defensive line forward are Spain’s marauding full-backs. Sergio Ramos and Joan Capdevilla’s strengths have never been, nor will they ever be their defensive talents, but their sheer determination to bomb forward and support the midfield shapes the Spanish line-up.

To compensate for this, Vicente Del Bosque makes full use of an anchoring midfielder, played deep in their own half when they are defending, usually in the shape of Sergio Busquets now that Marcos Senna has retired. In doing so, the anchor can fill in for either of the full-backs when they have possession and protect the defence when they don’t.

Busquets, however, isn’t the only reserved midfielder at their disposal. Xavi Alonso plays a role that bears distinct similarities to the one he fulfilled for Rafael Benitez’s Liverpool. Ever so slightly more advanced than Busquets, Alonso becomes the “Quarter Back” for Spain, responsible for maintaining possession and being the midfielder capable of dictating the tempo.

Partnering Alonso in the more traditional, attacking midfielder role is Spain’s talisman and arguable the finest central midfielder in the world: Xavi. His passing range, creativity, positioning and reading of the game is unrivalled and he remains Spain’s most potent weapon in their attack. His performance is integral as he is the link between the midfield and the attack, spreading the ball into the path of David Villa and Fernando Torres.

Aside Xavi is Andres Iniesta, the so called fading force who enters the spectacle short on fitness having only recently recovered from injury, but there’s still magic enough in his legs to change a game and, in all seriousness, Del Bosque could easily replace him with Fabregas or Jesus Navas without sacrificing an ounce of quality.

Spain can boast an embarrassment of riches in midfield, so much so that the phenomenally talented Cesc Fabregas sits on the bench, and, as a result, have several back-up plans should players pick up injuries or suspensions with the most favourable being the inclusion of the much sought-after David Silva. The Valencia midfielder, comfortable through the centre, on either flank or in a second striker role, has just the right pace, trickery and intuition to be feared.

When Del Bosque opts for Silva, Spain tend to collapse into a Mourinho-style 4-5-1 formation played slightly narrower, with Iniesta on the left and Silva on the right assisting David Villa not too dissimilar from the tactic favoured by the Dutch.

This rather narrow midfield is spearheaded by attacking outlet that rivals any other present at the World Cup. It’s an age old adage that two equally talented strikers will clash, Shearer and Sutton for example, yet the understanding between Villa and Torres is second to none and the fluidity harboured by the midfield does not break down here.

Tactically, the narrow setting of the midfield allows the full-backs the space to push on ahead and, with Busquets staying reserved, what appears to be 4-4-2 on the surface can easily switch to a 3-5-2 and will certainly play more like the latter when Spain have possession.  This does, however, have as many weaknesses as it does strengths.  Flooding the midfield with four central players and two attacking full-backs consumes a considerable amount of space, especially if the opposition respond to the fluidity of Spain’s football by flooding their own midfield.

The short-passing game relies on the players to move around the pitch in order to garner more space and, if there is simply no space to move into, the passing game will break down having hit a brick wall.

Using this system, with neither Ramos nor Capdevilla amongst the strongest of defenders, Spain are also incredibly prone to a taste of their own, swift medicine. Puyol, revered as he may be on the continent, lacks the pace and stamina these days to monitor a focused counter attack and, with the full-backs so flung forward, a neat counter-attack into these areas is likely to catch Spain cold and this is precisely what happened against Switzerland. Spain were caught in possession with both full-backs in advanced positions, a searching ball was driven to their right hand side and a fleet-footed defence could not keep the ball out of the net.

Duly noted, a perfectly executed counter-attack is one of footballs most sought after occurrences and increasingly rare in today’s game of possession football, the other leading nations will take great positivity in this Achilles heel and that this apparent stainless veneer has been spoiled.