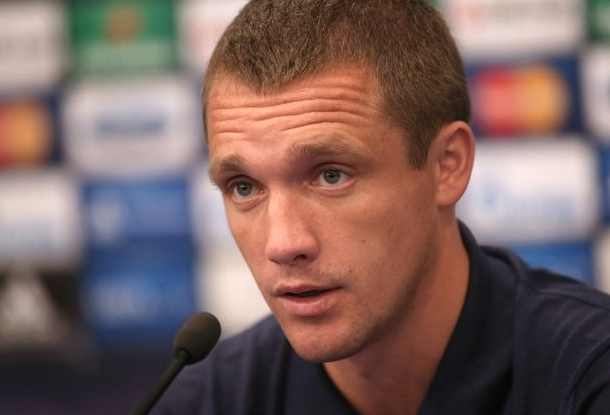 The huddle at the end – one of relief and genuine emotion – seemed to symbolise the mood that enveloped the Dinamo Stadion  in Minsk last Tuesday night.  Arm in arm with his players was Viktor Goncharenko, not in the centre of the huddle, not in the middle of the pitch taking the acclaim from the crowd but like Eisenhower arm in arm with his men.

After the 3-1 defeat of FC Bayern the Bate boss spoke of his “eternal gratitude to everyone…. I can’t find words to express my gratitude”. He also talked about being “born under a lucky star”. These comments sum the fresh faced 35 year old, who is attempting to transport Bate’s national success on to the European stage.

Goncharenko is the product of a middle class family- his football mad father was an engineer and his mother was the manager of a shop in Khoiniki but Goncharenko was football mad from a young age. Khoiniki back then was a relatively comfortable town but its serenity was shook to its very foundations when the Chernobyl nuclear disaster occurred. The town was badly affected by the radioactive fallout.

The disaster, however, did not impact on his parents ambitions for young Viktor. His friends talk about how Goncharenko’s parents always dreamed of him educated himself to the highest possible standard to make a better life for him. It is therefore surprising that Viktor’s parents allowed him to join a football academy when he asked aged just nine. Here his coaches noted his work ethic and perseverance as his stand out qualities.

Goncharenko was unafraid to face the challenges thrown at him on the pitch- his coaches constantly told him that his positioning needed to improve so he worked on and worked on it and then worked some more until he no longer got exposed on the pitch . Sadly for the young Goncharenko he would face daunting challenges off the pitch also.

Goncharenko’s father Mikhail died in 1993 following the Chernobyl nuclear disaster. This horrific loss so young only seemed to push Viktor to succeed in the world of football. Since he approached them aged nine looking to go the football academy, his parents had urged Viktor to push himself to the top of the footballing world.

Goncharenko knew that to become a professional, he needed to come into contact with better players, coaches and further his football education. In 1995 he went along with Vitali Kutuzov, Yuri Zhevnov and a young Alex Hleb to the Republic College of Olympic Reserve in Minsk. Here, Goncharenko benefited greatly from working with better players and his development surged.

Just three years after joining the college Goncharenko was now a player at Bate Borisov, where he won two league title before having to retire as a result of a bad injury. Those who know Goncharenko argue that he would have always gone into coaching but the career ending injury brought this switch forward. Goncharenko went on two refresher courses following his injury one on physical preparation and one on Business management. This showed that Goncharenko understood that despite his playing experience and he needed to develop a broader skill set if he was to succeed as a manager.

Goncharenko’s first foray into coaching was as assistant manager at his old club FC Bate Borisov under Yuri Puntus and Igor Kriushenko. Goncharenko used this time as a right hand man to work on his man management skills and preparation – like Jose Mourinho and Louis Van Gaal he believes that the training ground is a work place so time keeping , structure and pre organised sessions are essentials to succeed at the top level.

Goncharenko finally got his chance as a manager in 2007 and immediately he warned the players that their conditioning and work rate would have to improve. Bate had taken a significant gamble appointing a 30 year old who may have talked a great game but  had no experience as a top flight manager. The gamble paid off handsomely for Bate under Goncharenko they have won the league championship in 2008, 2009, 2010, 2011, the Belarusian Cup 2010 and in 2008 under his reign they became the first Belarusian club to qualify for the group stages of the Champions League. Goncharenko himself has received numerous awards- winning the manager of the year three years in a row.

Today Goncharenko is still in charge and in even stronger position. They are on the back of the victory over FC Bayern well positioned to qualify for the group. Bate’s success is based on two things solid domestic success and a good manager. Bate and Goncharenko are well placed to lead the eastern charge on Europe.