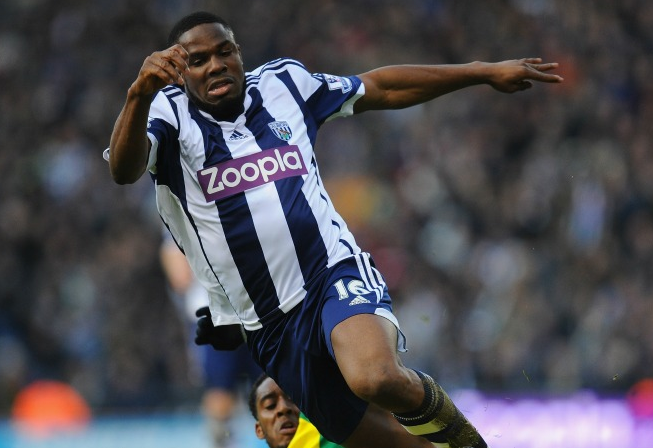 Six games, four draws, two losses and no wins. It is fair to say that Pepe Mel’s West Brom reign has got off to a tepid start.

With no win since New Year’s Day, and following a string of stuttering performances, with every passing week, the prospect of relegation seems more and more realistic for Albion.

The blame for the club’s current predicament has been thrust in several directions, with the finger especially pointed at the board and old manager. Despite this, the most important problems remain very much on the field. The most prevalent of these problems for the Baggies is the lack of goals. Despite having a multitude of strikers, the Baggies do not seem to be able to find the key to unlock opposition defences, and if we are brutally honest sorely miss the game changing presence of Romelu Lukaku at the top of the park.

The question remains, what is the answer to Albion’s attacking woes? The answer, in my opinion, rests with big striker Victor Anichebe.

Following his big money move from Everton, Anichebe endured a difficult start to his career as an Albion player as he was widely chastised amongst supporters for his average performances and tendency to pick up niggling injuries (leading to the moniker ‘Sick Vic’).

After scoring only one goal in the first half of the season, old boss Steve Clarke started pushing Anichebe towards the periphery of his squad. However, Clarke’s replacement with Pepe Mel seems to have given the big Nigerian a new lease of life.

Anichebe has played a role in all six games since Mel has taken over the club, scoring two goals and creating two more goals along the way.

His physicality has caused problems for every defence he has come up against, and whilst his unusual  susceptibility to injuries means that he probably cannot manage a full 90 minutes as of yet, Anichebe does look much leaner, fitter and quicker than he did at the start of the season.

It is true to say that Anichebe will never be a prolific goalscorer (one need only look at his goal record at Everton to see that, as Anichebe scored only 18 goals in 131 games), but what Anichebe can offer that other Albion attackers do not is his hold up play.

Whilst the likes of Matej Vydra, Saido Berahino and Thievy Bifouma all offer pace and skill to Albion’s attack, Anichebe’s strength and presence means that he can bring other players into the game far more effectively than other players. It is this that has made the difference in recent fixtures against Chelsea and Liverpool, when Anichebe has come onto the pitch and changed the game.

The truth is that Albion are a far more effective attacking unit when Anichebe plays, and if they are going to maintain their Premier League status then it is imperative that they play Anichebe alongside either Berahino, Thievy or the predatory Matej Vydra.

With time running out fast, the fate of West Bromwich Albion looks like it is heading in an increasingly grim direction. However, the inclusion of Victor Anichebe in the attack may provide Albion with the platform to finally establish a potent attacking threat that could be the key to their survival come May.