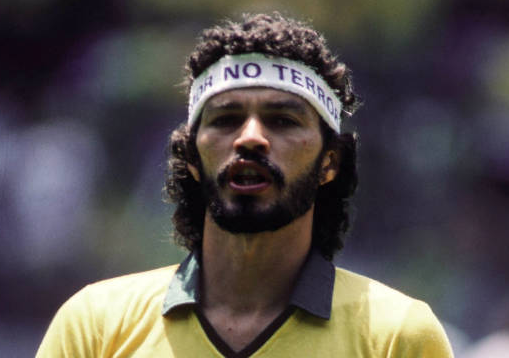 Since the untimely death of former Brazil superstar Socrates tributes have flooded in, praising the former skipper for the contribution he gave the world. Much has been lauded of his time as a player, and indeed the input he gave the political world, as well as being a qualified doctor, but one particular aspect of his life that has intrigued many Irish natives has been the fact that he apparently used to play for UCD AFC, or the University College of Dublin’s football team for those of you living elsewhere, during the 1970’s.

A bit about UCD first:

UCD was born the Catholic University Medical School Football Club in 1895. It was up and running the subsequent year, playing friendlies and such, and were the founding members of the Leinster Junior League in 1896, and went on to make the semi-finals in 1897. The ‘College’, as they’re so fondly known as, enjoyed considerable success in the early 20th century, winning the inaugural Irish Intervarsities competition, the Collingwood Cup, in 1914 and collected the Irish Intermediate Cup the following year, beating Portadown 2-1 in the replayed final.

After just a season back in Ireland’s second tier, the College re-entered the top-flight of Irish football after winning the First Division in 2009, finishing a single point ahead of fellow Dubliners Shelbourne FC. A steady season back saw them steer clear of the relegation places and finish a respectable 8th out of 12th. One of the many highlights of the 2010 season was UCD’s famous 3-2 home win over Europa League-bound and reigning champions Shamrock Rovers.

Their second season back featured one of the oddest, most peculiar finishes to a game you’ll ever witness. The College were 2-0 up inside 25 minutes thanks to strikes Paul Corry and SamirBelhout respectively but went into the break only 2-1 up, proving to be the architects of their own downfall after Drogheda’s Gavin Brennan capitalised on some poor UCD defending. United then went on to equalise on 58 minutes, through Jordan White, and then scored a further two, on 61 and 64 minutes, to make it 4-2. What then happened was one of the best, most sensational comeback’s you’ll ever see. UCD’s Darren Meenan halved the deficit on with ten to play and Robert Creevy then leveled the scores with only six minutes left before Graham Rusk, or ‘Rusky‘ as adored fans call him, grabbed the 9th and final goal to end a thrilling contest between the relegation contenders.

Anyway, returning to Socrates, and a myth’s transpired about him having used to play for UCD, or indeed their reserve side. While nobody knows if it’s there’s any truth behind it, many have supported the theory, including former FAI press officer Brendan McKenna who said  “Socrates did play for UCD, but it was way, way back, sometime in the 70s.” The view was supported by Gerry Callan of the Irish Daily Star, who said he thought the Brazilian did play for UCD, but he only featured for the reserves on Saturday’s instead of the first team on Sunday’s, as he only wanted to play on a Saturday.

The tale then went unmentioned for the better part of 14 years before reappearing in the Guardian’s “Knowledge Unlimited” series when the question was posed to journalist Sean Ingle and then in 2003 when the myth was debunked in a match programme between UCD and St. Patrick’s Athletic, where it dismissed the claim that he had played for the College but made the allegation that he had, in fact, studied medicine at the Royal College of Surgeons (RCSI) in Dublin in 1976. The passage also asserted that he went to the RCSI’s trials for their Collingwood Cup team but chose to focus his attention towards his study instead after being appalled at the lack of ability his teammates possessed.

The Guardian delved into more detail about the matter in 2002 when they revisited the issue and provided a more in-depth look at the subject from a reader who claimed that Socrates had quit the team after only “a couple of games because the coach and manager at the time, Dr. Terry O’Neill, insisted that he quit smoking.”

Billy McGrath, a former UCD player, who played for the College from 1973-77 backs up the claim that Socrates never played for them, confirming that “At the time the UCD first team was playing in the League of Ireland B division so if he was playing for UCD – and not good enough for the first team – he would have been in the Leinster Senior League.”

Various publications have tried their best to sink the unsinkable myth with the (now defunct) Sunday Tribunes’ article “Will the Socrates Myth Ever be Put to Bed?” in 2006 urging the fans living in hope to “put a stake through the heart” of this so-called myth. An English language newspaper in the People’s Republic of China, The China Daily, ran an article in 2006 that described Socrates as “an alumni of the College of Surgeons in Dublin” so the myth isn’t necessarily going anywhere soon.

However, even despite this, websites such as Footbo.com continue to maintain that Socrates had in fact “spent time in Ireland and turned out for the University College Dublin (UCD) team.”

Socrates then finally came out and delivered the verdict himself, stating that he had actually never been to Dublin, totally disproving the widely-spread myth. So the fact that he’s never actually visited Dublin means he never played football for UCD which, of course, means there’s no truth to the myth.

Oh well, one can dream.

4 thoughts on “Unmasking the Myth: Socrates and UCD”