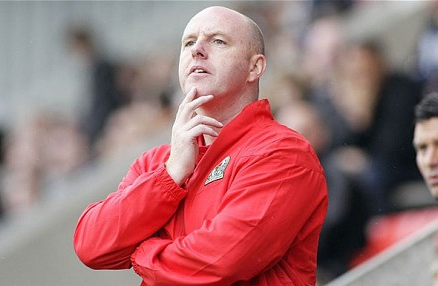 You’ll have seen it by now, the promotional viral video which has confirmed that Blackburn Rovers players are fairly fond of their owners’ poultry products – whether contractually obliged to be so or otherwise.

There’s the teak-tough duo of Ryan Nelsen and Chris Samba, eyeing up the kind of suitably super-sized chicken portions which probably wouldn’t touch the sides on the way down. A stuffed Michel Salgado looks as happy as ever he was when tucking into the finest paella in the even finer Madrid restaurants, whilst David Dunn – despite conceding possession of his meal – wears the look of a man relieved that his former Birmingham City owners didn’t ask him to advertise their wares during his four years at St. Andrew’s.

Steve Kean though, is nowhere to be seen. It somehow seems extremely apt.

The Rovers manager has been viewed as a peripheral figure ever since his appointment last December, initially on a deal until the end of last season, and then on a longer term contract a month later. Rightly or wrongly, it almost seems entirely correct that Kean wouldn’t be invited to a Venky’s-catered bash inside Ewood Park’s home changing room, but why?

Undoubtedly the answer lies in the Scot’s low profile. A coach at Reading, Fulham, Real Sociedad and Coventry City up until 2009, you would have found many supporters of those four clubs who’d have struggled to pick the 43-year-old out in a crowd. When Sam Allardyce added him to his Blackburn staff after succeeding Paul Ince, it was done to little fanfare.

It was against this background that his elevation to the top job upon Allardyce’s removal was viewed with scepticism, with many jumping to the easy conclusion that it proved the new Venky’s group were out of their depth. That Kean was simply their yes man.

The mistrust of Blackburn’s Indian owners very much mirrors that of their manager. They are unknowns.

The Premier League is currently awash with foreign owners of course, but the current crop have come with either a tradition of sporting success or bags and bags of cash with which to buy one. Venky’s don’t have the former, and have shown no indication of proving that they’ve got the latter.

By remaining low-profile the owners appear to have made it clear; that their failure would be Kean’s failure, and not necessarily vice versa. That he isn’t their yes man, but their fall guy.

Put simply, at a time when the Glaswegian needs help from his board he isn’t getting it. A trial for drink-driving awaits two days after Blackburn’s opening match of the season against Wolves, and while Kean could do with some good news to take his mind off that, he faces starting this campaign with much the same squad that went into the final day of last season at Molineux still not safe from relegation.

At the time of writing only Aberdeen youngster Myles Anderson – son of the agent Jerome – has been added, with 22-year-olds Radosav Petrovic and David Goodwillie waiting to sign on their dotted lines. The former is a Partizan Belgrade and Serbian international midfielder, whilst the latter has caught of the eye of many clubs whilst scoring goals in the SPL for Dundee United. Promising signings yes, but hardly those designed at worrying the top half of the table.

That is likely to remain out of reach for Kean, who will predictably start a season of struggle as the favourite to be the first Premier League manager sacked.

He’s already proved to be the last boss that you’d invite to your poultry party, and as he starts a campaign which is likely to make or break the Blackburn ownership – and in turn his future – he’s on the outside looking in again.