Day Two of the Under 19 European Championships relived, as Greece knocked four past hosts Estonia, Spain and Portugal ended 3-3 and England beat Croatia.

Greece recorded their first victory of the tournament with a stylish, convincing win over Estonia who simply couldn’t cope with the intensity and tempo the match was played at.

Giorgos Katidis. the skipper, netted first to give Greece a 1-0 lead before Spyros Fourlanos (1) and Dimitris Diamantakos (2), who scored in their opener against Spain on Tuesday night, sealed the three points.

Estonia did get one, very late on, to restore some pride. Karl Eerik-Luigend, the Estonian captain, grabbed a goal in the 90th minute but Greece were the dominant force. 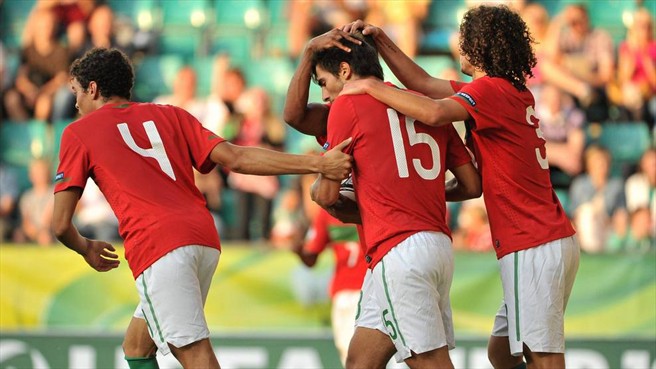 What a match. Just what a match this turned out to be. I was lucky enough to find a link to watch it, and it was literally none stop, end-to-end, goals galore mayhem. And the great thing is, this leaves Group A wide, wide open.

It was a game filled with pure talent, as Spain’s impressive Jese Rodriguez converted a fine hat-trick. His first, came in the 8th minute, as the Real Madrid youth player latched onto Oliver Torres’s delicious through ball and calmly slotted home.

Sporting Clube de Portugal midfielder Bruma, however, had other ideas as he fought back for his side and clinched an equaliser just moments later. The winger, the team’s driving force, thumped past Kepa Arrizabalaga.

All this and just 11 minutes on the clock. Jese, again causing trouble, managed to drive down the right flank and produce a shot on goal that flew into the Portuguese net as he fired his team back into the lead, before Andre Gomes got the faintest of touches on Bruma’s corner kick to make the scoreline 2-2.

Alvaro Borges’s were caught napping minutes after the break, though, as Jese – who was such a menace throughout – completed his hat-trick with a sweet finish into the corner following some fine wing play from Barcelona midfielder Gerard Deulofeu.

It looked set for a Spanish win. However, the final few minutes served up some drama as Alejandro Grimaldo fouled Ricardo Esgaio in the area, and Joao Mario made no mistake from the spot kick. A fantastic, tense finish to what was an outstanding match.

France made it two wins out of two as they edged out Croatia, who gave a poor showing with no real threat in attack. France now progress to the knock-out stages.

In what was a tie of very few clear cut opportunities, it was Pierre Mankowski’s men that came out on top. Dimitri Foulquier found the net with just 11 minutes remaining, to fire his side into the last four of the Championships and break Croatian hearts.

Noel Blake’s side retained the 100% record in the tournament with three points against a Serbian side who consequently go out following the defeat. A point against France on Monday night will secure a semi-final place for England, so the pressure is mounting.

Arsenal frontman Benik Afobe, who endured a loan spell at Reading at the back end of last season, scored early on in the first half to give England a healthy lead. before highly rated Birmingham wing wizard Nathan Redmond struck on 63 minutes to make it 2-0.

Serbia, who have played two and lost two recording zero points in Group B, did bag one back with 20 minutes left as forward no.11 Nikola Ninkovic scored nothing more than a consolation.