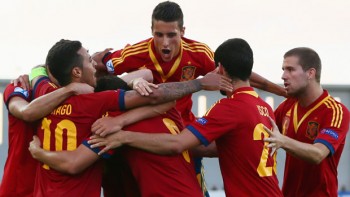 On July 1st 2012, Spain cemented their place in the international history books after demolishing Italy 4-0 in the European Championship Final. This evening, the understudies to that dominant force in Kiev a year ago look to follow in their footsteps, as the U21 Euros once again pits the Spanish against Italy.

Another red and gold steamrolling performance in the final is hardly farfetched, either. Spain’s U21s have won every of their four games, scoring eight goals and conceding none, romping to the final without so much as a flinch. Fellow group nations Russia, Germany and Holland were left in their wake, and what was touted as being a tough group to call ended up being far from it. Spain did take a while to warm up in Israel, needing two late goals from Alvaro Morata in the games against Germany and Russia to seal 1-0 victories and make their superior possession count. Holland meanwhile, beat the same sides 3-2 and 5-1 respectively, and heading into the last group game seemed like the obvious favourites. Spain proved why the punters rule them out at their peril, though, hitting three goals for three points and three wins in a completely one-sided affair.

Their semi-final opponents Norway were also brushed aside with complete ease, and another 3-0. Morata grabbed his fourth goal of the tournament, while Isco dazzled any potential watching suitors.

Italy’s U21s didn’t have such an easy ride, or rather, didn’t make it seem so easy (one of Spain’s greatest traits – pulling quality opponents apart to make them seem poor). The Italians also went unbeaten in their group, besting a lacklustre England and sticking four goals past hosts Israel. Two goals in injury time meant they shared the spoils with Norway, but topped the group, avoiding Spain in the semis. Instead they faced the recently humiliated Holland, and further piled the misery on them with another late goal, from Liverpool’s Fabio Borini. It was a much tougher match than the Spanish faced, but the Italian resistance and resilience was a delight to watch.

Frankly, Italy are up against it tonight. Spain boast a wonderful squad who, were it not for their nation’s terrifying quality in depth, could have easily been plying their trade for the seniors. There are names to watch out for in Brazil next year, with Malaga’s Isco, Barcelona’s Thiago, Tello and Bartra, Benfica’s Rodrigo and Madrid’s Morata all set for an important year domestically. The former is rumoured to be mulling over offers from Manchester City and Real Madrid, while Real Sociedad’s Inigo Martinez is reportedly being lined up as Carlos Puyol’s successor at the Nou Camp. The holders are captained by Manchester United’s David de Gea, and the fact that Old Trafford’s no. 1 is fourth in line for the senior team’s shirt highlights what a force the Spanish are in world football. He’s one cap away from making the highest number of appearances for the U21s, and it doesn’t look set to end anytime soon.

Italy aren’t without their own stars, however. Lorenzo Insigne has a bright future ahead of him at Napoli, and at a diminutive height of 5ft 4 has a shade of Aaron Lennon about him. He’s got killer pace and a lashing long shot which makes him a nightmare for defenders. Sticking with the half-pints, Marco Verratti makes the grade off a stellar first year with Paris Saint-Germain and a debut cap for the senior side. Whispered to become the next Andrea Pirlo, minus the luscious locks, Verratti is a key cog in the Italian machine, while others like former Inter centreback and current captain Luca Caldirola and Liverpool’s Fabio Borini also deserve a shout, but need to stand up and be counted if their side are to trouble the Spanish.

In terms of style, both U21 managers Julen Lopetegui and Devis Mangia take inspiration from their respective senior team managers Del Bosque and Prandelli. Lopetegui’s side have embraced the hypnotic passing style, now as synonymous as the red and gold of Spain, waiting patiently for the perfect time to strike a blow at their opponents. Mangia is of the same bottle as Prandelli, keeping an open, flowing game focused on attack, but with a sturdy defensive reliability. “Winning”, he recently said, “is important, but the way you do it is more vital.”

While the result remains in the balance, you can bet the senior players from both Italy and Spain will be taking time out from the Confederations Cup in order to cheer their understudies on. For Italy, it’s about regaining some sort of pride after the tears of Kiev. For Spain, business as usual. Shock and awe on the road to world dominance. And yet, while the seniors may be on course for a clean sweep of titles, having won the previous two Euros and the intersecting World Cup, at U21 level things are a little closer to call. Spain have won the competition three times and been runner up twice. Only Italy have bested that record, winning five.