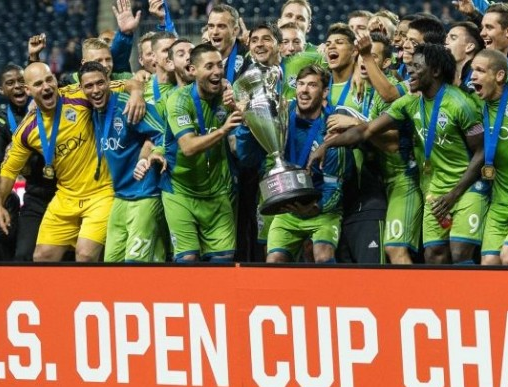 “Every guy left it on the field. That was a man’s game.”

—Philadelphia Union Coach Jim Curtin, after the club’s loss to the Seattle Sounders in the U.S. Open Cup on Tuesday night.

Tuesday night was a great night for Major League Soccer even if there technically wasn’t a Major League Soccer match going on. While the rest of the league were preparing for the weekends action, four MLS sides went to battle in competitions that had very little bearing on the MLS Playoffs.

On Tuesday night, the Philadelphia Union, Seattle Sounders, D.C. United, and Portland Timbers were all engaged in difficult tournaments that might not have any real impact on the MLS Season, but certainly have an impact on MLS. As the Philadelphia Union and the Seattle Sounders fought for the U.S. Open Cup, D.C. United and Portland faced continental rivals in the CONCACAF Champions League.

While the standard response over the years for the CONCACAF Champions League and the U.S. Open Cup has been Who Cares both tournaments have had added importance in recent years. In the past tournaments like these were either completely ignored by players, coaches, and fans or treated more as minor nuisances. The New York Red Bulls famously two years ago did not even send their head coach to an Open Cup match against a lower division team. Part of the problem stems from MLS essentially being created outside of the U.S. Soccer club pyramid and being created by people who want a single entity system.

But as Major League Soccer continues to grow, there is increased desire for teams to win trophies and represent their supporters in positive manners. The days of simply ignoring these tournaments are gone, those backwards sentiments pushed to the dust bin of failed soccer ideologies like the backwards clock and the running penalty kick. Any supporter watching play on Tuesday night saw the Seattle Sounders taken to the limit by the Philadelphia Union, while the Timbers and United held on against Olimpia and Waterhouse FC. None of the matches were boring and each provided some insight into the possibilities of what American soccer can be.

Perhaps the most fascinating thing about the two tournaments is how they are linked to one other. As opposed to England, where the winner of the FA Cup goes to the Europa League, the Seattle Sounders will gain an automatic spot in the CONCACAF Champions League after having beaten the Philadelphia Union on Tuesday night. The CCL, as it is most commonly referred to, is the top-level tournament for CONCACAF club teams.

As opposed to their European neighbors, teams have been able to use CCL and the Open Cup to improve their form and get better results in MLS league play. Take for example D.C. United. United, one of the founding teams in MLS and a four-time winner of the MLS Cup, has struggled in recent years to reclaim past glory. In 2013 the club hit rock bottom, winning just three games and scoring just twenty-two times. To say that their performance in MLS action was dire would be an understatement. Think Derby County from the 2007-2008 Premier League campaign.

Although the club were an abomination in league play, their play in the Open Cup was much different winning the 2013 edition of America’s oldest soccer competition and earning a spot in the 2014-2015 CCL tournament. With a $1 million dollar bonus for winning the Open Cup, the club overhauled their roster during the winter transfer window and built a squad that is currently sitting in first place in the MLS Eastern Conference.

The CONCACAF Champions League poses a different challenge for MLS. While the Open Cup is another opportunity to win a trophy and to learn about the history of the game here in the U.S., the Champions League is all about one thing: defeating Liga MX. While MLS-based sides have won the competition twice (D.C. United in 1998 and the Los Angeles Galaxy in 2000) those titles were under a previous version of the tournament. Since the CCL was started in 2005, Liga MX has dominated MLS and the rest of CONCACAF winning all ten titles. MLS teams have rarely ever even come close to beating a Liga MX side with the exception being Real Salt Lake in 2012. Much like in Europe where the rivalries of Germany and England can go seamlessly from club to country, the same pendulum sways here in North America. Mexican club supporters simply do not like American club supporters and vice versa.

While both tournaments offer something fresh and unique to the soccer landscape here in the United States, there are still challenges. CCL matches are often relegated to the land of Fox Sports 2 or Fox Soccer Plus. U.S. Open Cup matches are barely shown (aside from YouTube or the occasional team streaming a game on their website). Those who were trying to watch the Waterhouse FC vs D.C. United match on Fox Soccer Plus night were treated to blurry images, no clock, and no commentary (the last part is not necessarily bad).

Even the U.S. Open Cup Final will likely barely register on the TV ratings charts with the game being shown on GOLTV, a great soccer channel of yesteryear but now mostly known for losing the Bundesliga rights. With their television rights deal up this season, hopefully the United States Soccer Federation can procure a real TV contract for at least the later stages of the tournament.

There are also issues with relation to quality of play. For as much as the lower divisions of US Soccer have improved by leaps and bounds in recent years, there is still a very large gap in the quality of teams in the lower divisions or U.S. Soccer and in the Carribean and Central American club leagues to MLS or Liga MX. Refereeing also needs to be improved across the board, but that is a criticism that every supporter has in every league in the known world.

But change is coming to American soccer. With money and resources being spent on both the top and lower levels of football here in the United States it is inevitable that the quality of play will improve and that there will be increased interest in competitions like the CONCACAF Champions League and the U.S. Open Cup. If Tuesday night’s match slate was any indication of the potential of where the product is going both here in the United States and in the region then perhaps supporters might have more to cheer for in the years to come.